Related links
​A little name-dropping here might help set the scene; among the artists to have been born or lived in Florence we can count Michelangelo, Leonardo da Vinci, Donatello and Lorenzo Ghiberti. To the list of artists you can add Giotto who was also known for his architectural prowess along with superstars of the industry such as Brunelleschi and Giorgio Vasari whose beautiful corridor leading from the Uffizi Gallery across the River Arno to the Palazzo Pitti is one of the most remarkable creations in the city.

​From the literary world we can add such luminaries as the poet Dante, father of the Italian language, and Niccolò Machiavelli whose treatise The Prince has been influencing politicians for more than 500 years. To this rather extraordinary list of names we can also add Galileo Galilei, an astronomer/polymath whose work advanced a number of scientific fields sufficiently to still be revered to this day.

With the influence of the characters listed above, it's no surprise that Florence has thrived from its renaissance boom to its position in modern times as one of the most desirable tourist destinations in Europe. It has a relatively low population, under 400,000, which belies its cultural importance to Tuscany and to Italy as a whole. It's not particularly big in terms of physical size either and this is perhaps one of its greatest advantages: making it so easy to get around and see everything on foot.

​Without a doubt, the starting point for any itinerary of the city should be the Piazza del Duomo; this is the most famous square in Florence and home to several of its most important sights. The centrepiece of the square is Florence Cathedral with its marble facade and distinctive dome created by Brunelleschi who broke all the hitherto known rules of geometry to create it. The Cathedral is flanked by Giotto's Bell Tower which you can climb for one of the best views of the city. You can also reach higher than the Bell Tower by entering the Cathedral itself and climbing up to Brunelleschi's Dome, a passage that's not for the faint-hearted with its vertigo-inducing views.

Just in front of the Cathedral lies the beautiful Florence Baptistery with its matching marble exterior, punctuated on either side by the Gates of Paradise, a pair of bronze doors for which the sculptor Ghiberti is most-famed. At the opposite end of Piazza del Duomo stands one of the city's best museums; so vast was the treasure inside the Cathedral that a separate building was required to house it and you can enjoy these incredible riches at the Museo dell'Opera del Duomo.

​A walk south of Piazza del Duomo will see you walking any of a series of beautiful streets which these days are occupied by high-end shops, boutiques and hotels. Many of those streets lead to the second most important square in Florence: Piazza della Signoria. This expansive square is one of the best places to eat or drink in Florence with its dozens of restaurants and their outdoor seating areas where you can watch the world go by. The most famous building on the square is the Palazzo Vecchio, Florence's town hall from which protrudes the striking medieval tower known as Arnolfo's Tower to some or Palazzo Vecchio Tower to others. Just outside the Palazzo Vecchio there are two important sculptures: the Fontana del Nettuno, and "a" Statue of David, a copy of its more famous counterpart by Michelangelo which is on display north of the city centre at the Galleria dell'Accademia.

The next building south of the Palazzo Vecchio is the Uffizi Gallery. This is one of the most famous museum galleries in the world and you really need to make a day of it for an effective visit. The enormous gallery building stretches to the banks of the River Arno which can be crossed by Vasari's incredible internal corridor. That corridor forms part of one of the world's most famous bridges: the Ponte Vecchio, built in 1345. A quite unique bridge both at the time of its construction and certainly in modern times, it is almost a little district in itself with its multi-floor layout concealing a number of jewellery shops. The covered section above those shops is the continuation of the Vasari Corridor, built so that the most important people in the city wouldn't be bothered by the hoi-polloi and were able to make their way across the river in peace.

Across the River Arno, the destination of those VIPs of the day was the Palazzo Pitti. The huge palace is nowadays home to a series of galleries and museums, while its gardens are among the most celebrated of their kind in the world. Boboli Gardens stretches from Palazzo Pitti all the way up to the imposing Forte di Belvedere, known among other things for its wonderful views. However, the very best views of Florence can be enjoyed from Piazzale Michelangelo which sits on a hill south-west of the city centre. From here you can see almost all of the city's famous sights from the River Arno with its bridges and the dozens of churches and palaces on either side.

It's impossible to capture everything that's good about Florence on a single page; in most other cities, the Bargello National Museum or the Basilica di Santa Croce would have been at the very top of the list but this just illustrates the depth of sights Florence can offer.
​UNESCO World Heritage Site

Things  to  see  in  Florence 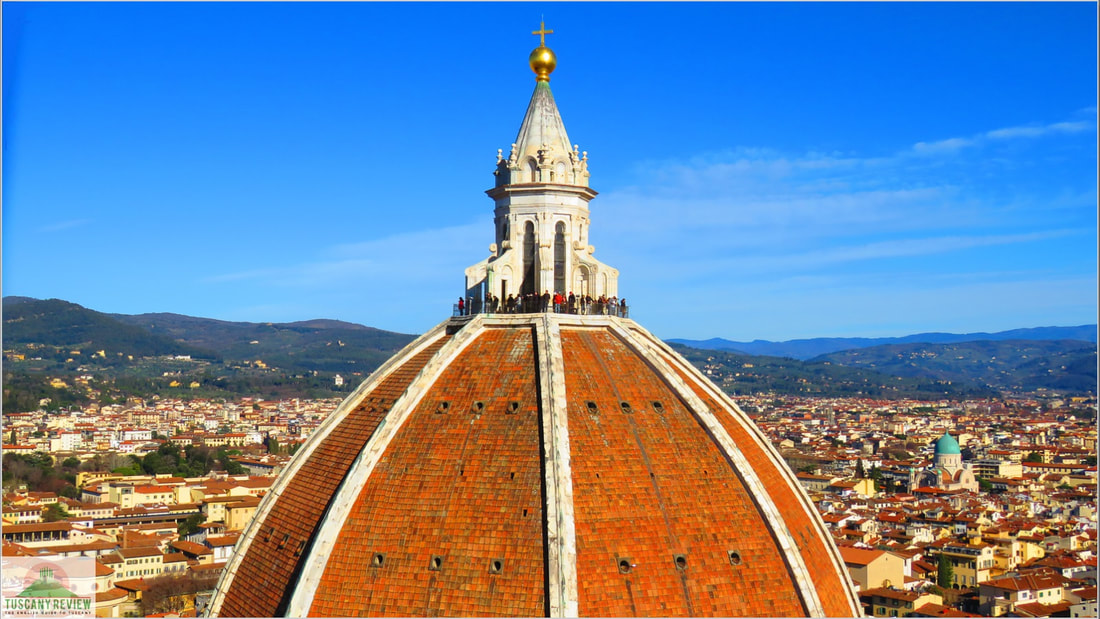