​In an area dominated by the sea, it's no surprise to learn that its capital city Genoa was once a mighty maritime power of the medieval world, rivalling Venice for control of world trade at one time in its history. Known affectionately as La Superba, Genoa marks the halfway point along Liguria's coastline, dividing it in two with the Riviera di Ponente to the west and the Riviera di Levante to the east.

Within the two rivieras are some of Italy's most beautiful seaside resorts, along with the area known as the Cinque Terre, or "five lands", a series of fishing villages recognised by UNESCO as a World Heritage Site, along with the nearby town of Portovenere and the small group of islands it faces including Palmaria. The names of Liguria's most famous resorts read like a who's who of Italian seaside towns including Portofino, Sanremo and Rapallo. Lesser-known but no less beautiful, towns such as Sestri Levante and Camogli fly slightly under the international radar but are firm favourites among Italians.

​As with all of the twenty regions of Italy (with the exception of Valle d'Aosta), Liguria is split into a series of provinces. Generally-speaking, the provinces are named after the main cities and towns in the region and in Liguria's case they are officially the Metropolitan City of Genoa, La Spezia Province, Savona Province and Imperia Province. Looking at those four provinces from east to west: La Spezia is an important commercial port and home of a large naval base. It sits at one corner of what is known as the Golfo dei Poeti (Gulf of Poets) with the Portofino Peninsula to its south and a series of seaside towns to its west including Lerici and San Terenzo.

​Liguria is roughly divided from neighbouring Tuscany by the River Magra although the important and beautiful town of Sarzana with its impressive castle still sits within the environs of Liguria. Further inland, characteristic hill towns such as Vezzano Ligure pepper the landscape.

West of La Spezia we find the recently-renamed Metropolitan City of Genoa which used to be called Genoa Province. Aside from the obvious appeal of the regional capital, there are some of Italy's most sought-after resorts within this province with Camogli, Rapallo, Santa Margherita Ligure and Portofino all cornering the eponymous peninsula. There are also some lower-key but exceptionally beautiful fishing villages closer to Genoa including Nervi and Bogliasco.

Of the two provinces that form the Riviera di Ponente, Savona Province is the more easterly. The city of Savona has a large, historic port which has recently been modernised and is now one of the most attractive in the region. The seaside towns of Alassio, Laigueglia and Finale Ligure are among the most popular in Liguria, while the historic town of Albenga with its medieval centre offers something very different from its neighbours. Head inland from Finale Ligure and you find the charming, colourful little town of Finalborgo, included in the list of the Borghi Più belli d'Italia (Italy's most beautiful villages).

​Imperia Province occupies the area between Savona Province to the east and France to the west. This stretch of coastline was one of the first to be developed when international tourism arrived around the beginning of the 19th century. The greatest expression of architecture from the period can be found in Sanremo; a signature seaside town famous for its casino and glamorous hotels. There are dozens of smaller resorts along this coastline which ends at the border town of Ventimiglia; edge even closer to the French border and you'll find the beautiful Hanbury Botanical Gardens. A distinctive topographical feature of Liguria is a series of roads that climb away from the coastline up into the hills and mountains of the region's interior. These really are worth exploring with Dolceacqua, Triora and Apricale offering particular appeal.

​Liguria is well-served by travel links; international travellers can fly into Genoa Christopher Columbus Airport at the very heart of the region and then choose to move around by public transport or private car. Most of Liguria's seaside towns have a train station in or close to the city centre while the most popular resorts and villages can also be reached via sea during the summer months. The roads are generally good in Liguria as well, the E80 motorway runs just behind the coastline, all the way from France to Tuscany while the smaller, inland roads are generally well-looked-after. One area to be avoided by car though is the Cinque Terre which can easily be reached by train or boat.

Things  to  see  in  Liguria 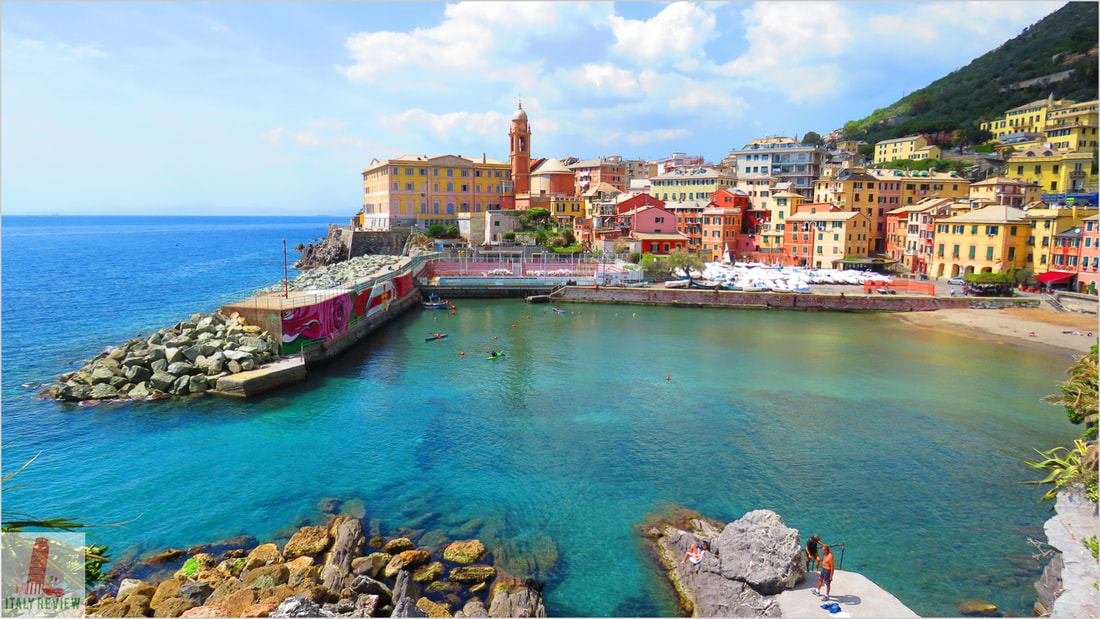