THINGS TO SEE IN ITALY

Italy is full of beautiful scenery, charming villages, imposing ancient monuments, a wide variety of climates and a rich history that has all combined to make it the number one destination for visitors in search of culture, excitement and jaw-dropping beauty. My guide seeks to help you locate the very best of Italy by giving you ideas and useful travel information along with great images of these beautiful places.

​Within the 15 categories below, you'll find Italy's greatest treasures, listed in order of importance of preference depending on the category type. Anything that appears on the pages of Italy Review, has been selected from the cream of the 38 websites that make up the whole Italy Review Network. You can use these pages to determine which sights are most attractive to you, or even the type of holiday you'd like to plan. You might for example be lured by the Major Cities such as Rome, Venice or Florence, or perhaps by some of the smaller ones that I've listed as Beautiful Italian Cities such as Siena or Pisa for example.

Away from the cities there are countless towns and villages that attract visitors for different reasons. I've carefully worked my way around Italy's entire shoreline, including those of its islands, and put together my list of recommended Seaside Towns. You'll know some of them such as Positano, Sorrento or Sanremo but you'll find dozens of others that are lesser known yet still offer as much, and in some cases more than the handful that get most of the attention. Equally as impressive as the seaside towns are the many Lakeside Towns with the likes of Bellagio, Varenna and Orta San Giulio whisking you away to a world of dreamy glamour.

So numerous are the towns featured on this website that I've split them up into a series of categories such as Historic Towns, Scenic Towns, Hill Towns, Mountain Towns, Vineyard Towns and Spa Towns. Two further categories may cause you to raise an eyebrow: Italy has a small number of what I call Painted Towns where the locals have used the shops and houses as canvases upon which to display their wonderful paintings. The other surprising category is that of Ghost Towns of Italy: these are towns that have been abandoned either due to a freak natural disaster such as an earthquake or because of economic factors, whatever the reason may be, they have an eerie, haunting quality that will appeal to many.

​It's not only within the Italian towns that you can find charm and intrigue however; there are countless villages that are bursting with charm and character. Some of the Hilltop Villages I've listed on the site seem to defy gravity with their precarious positions, with the village of Roccascalegna in Abruzzo being a prime example of this. Another category is the Picturesque Villages of Italy where you'll find some of my personal favourites including the marvellous Finalborgo in Liguria and the tiny but colourful Rasiglia in the hills of Umbria. There are also some pretty Fishing Villages such as Vernazza and Bogliasco in Liguria or Chianalea in Calabria that simply define the word "quaint".

Some of Italy's most sparkling beauty can be found among its islands. There are around 60 islands featured on this website that I've visited personally and these include all the major island groups, individual islands and lake islands. The largest islands of Sicily and Sardinia are two of the official twenty regions of Italy, but both have their own smaller islands or island groups such as the Aeolian Islands of Sicily or the La Maddalena Archipelago of Sardinia. Among the most striking islands are Ischia which is close to Naples or the tiny Asinara in Sardinia, partially named after the donkeys that roam freely there. ​

So rich is the tapestry of wonders in Italy that it's taken me this far to mention the magnificent lakes; it's likely that you've heard of the most famous such as Lake Como, Lake Garda and Lake Maggiore, but there are countless others offering different attributes. There are huge lakes where you can base yourself for a holiday, smaller intimate lakes where you can swim or others that are simply drop dead gorgeous and will leave you wanting to do nothing more than gaze out upon them. ​

When most people think of Italy, the images that spring to mind are the Colosseum in Rome or the Leaning Tower of Pisa. The country's best Man-Made Landmarks are featured on this site and include sub-categories of the best Castles, Squares, Bridges, Towers, Roman Monuments, Modern Landmarks and Monuments of Magna Graecia, while in the Natural Landmarks section you'll find the Rivers, Mountains and Mountain Ranges of Italy.

Another important section of the website brings history and architecture together; Italy is of course the home to Roman Catholicism and can boast an enviable collection of Religious Buildings. There are around 64,000 churches in Italy but in my guide I've selected the very best Cathedrals, the pick of the Basilicas and further sections for Abbeys & Monasteries, Chapels, Baptisteries and Religious Sanctuaries.
​
Italy is of course a hotbed of history; not only did the Romans leave their greatest legacies here but the Greeks that came long before them and the Etruscans who brought their Greek culture to the Italian peninsula. Many other empires and countries left their mark on Italy during Medieval times before the Renaissance and Enlightenment which had such a profound effect on the country's architecture. I've created a section called Cultural Institutions of Italy which includes everything from Archaeological Sites to Museums, Art Galleries, Palaces, Theatres and Gardens where you can pick up the trail of Italian history. The historical trail is strengthened further by the list of UNESCO World Heritage sites of which there are more than 50 listings in Italy, a greater number than in any other country on the planet.

Many of you out there will want nothing more from Italy than a beautiful beach to relax on for a week or two. I've scoured every inch of Italy's coastline to put together my selection of the Best Beaches in Italy. I restricted the page to around 30 but in truth I could have added 300 there. You'll find more beaches in a separate category: Beach Resorts of Italy, which includes the places that are a little more than just a beach but a little less than a fully-fledged seaside town.

​Both inland and in the coastal areas you can find a large number of parks in Italy; these are either the larger National Parks, the slightly smaller Regional Parks and Nature Reserves, as well as some of the most notable City Parks such as the expansive Villa Borghese in Rome or Parco Sempione in Milan.

​Italy's great outdoors offers a myriad of holiday opportunities as well: the country has some of the world's best Ski Resorts, most of which are also open in the summer months for activities such as hiking or cycling holidays. You may also like the idea of a driving holiday with Italy's Mountain and Valley Regions such as Val Gardena in the Dolomites or the Val d'Orcia in Tuscany providing some breathtaking scenery.

To help you get to know the country I've created sections on Italian Coastal Areas among which are the incredible Cinque Terre, the Amalfi Coast and the sun-baked Salento region of Puglia. Underpinning all of this is a detailed guide to the twenty official regions of Italy and a page for each of the 106 Provinces of Italy which are the smaller areas within the regions.

Last but not least, there's a section on Italy's wine regions where you can roam the undulating vistas of Lazio, Veneto or Piedmont (to name just a few) while enjoying world-class wines, the warmth of Italy's climate, but most of all, its people. 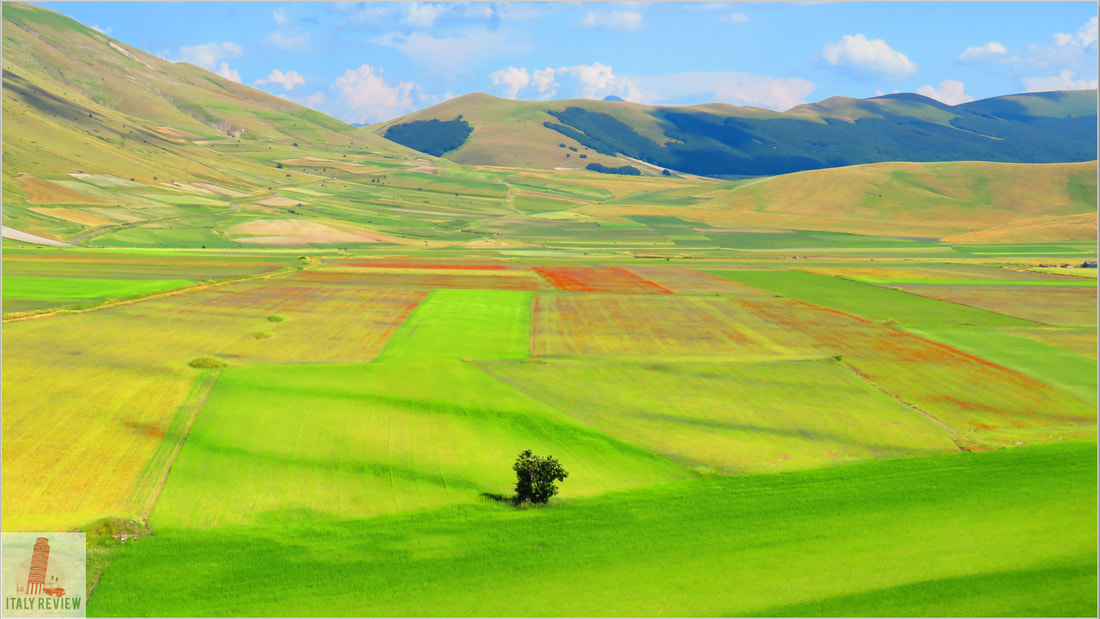 Castelluccio, Umbria
There are officially 20 regions in Italy including the island regions of Sicily and Sardinia. Each region has its own unique charm, culture and cuisine. For each region I've listed the must-see sights with photos along with statistical information and travel advice.