​Other Italian cities may conjure up certain iconic images such as Rome's Colosseum or Pisa's Leaning Tower for example; Naples doesn't have that obvious "go to" sight that everyone knows, but give it a chance, scratch the surface just a little bit, and you'll open a treasure chest gleaming with jewels.

The city was founded by the Greeks around 500 BC and was originally called Parthenope before being changed to Neapolis, "new city", which eventually morphed in to Napoli, and the anglicised form of the name: Naples.

For those that know where to look, Naples offers a unique experience with a mixture of history, superstition, architectural brilliance and natural beauty. Since 1995, the Historic Centre of Naples has been recognised by UNESCO as a world heritage site, and as recently as 2017 it received its second inscription by the same organisation for its tradition of making pizzas. Once you've eaten a pizza in Naples, you won't ever want one from somewhere else.

Naples is a deeply religious city where the patron saint Gennaro is worshipped with great devotion. Some of Italy's finest churches can be found here, often hidden behind a slightly faded facade but leaving you open-mouthed in surprise when you enter. There's also a religious fervour around the city's football team, SS Napoli, whose greatest ever player Maradona is worshipped at a city centre shrine.

​As the city is so large, it's sometimes difficult to say exactly where the centre is, but as good a starting point for any itinerary is the main square: Piazza del Plebiscito. At one end of the square is the distinctive and unusual Basilica di San Francesco di Paola, while facing it on the opposite side is the huge complex of the Royal Palace of Naples. This is one of the finest buildings in the city and a must-see with even just its beautiful staircase worth the entry fee alone. Attached to the Royal Palace, the Teatro San Carlo is the world's oldest theatre with an unbroken history, one which you can discover more about with a guided tour.

The grandeur of the buildings in this part of the city centre continues as you step out of the theatre and you're faced with the Galleria Umberto I. Any visitors to Milan might need to pinch themselves that they're not in the same place as it greatly resembles the Galleria Vittorio Emanuele II with its beautiful glass roof and polished floors leading to historic shops. A little tip here, at the Galleria's exit to Via Toledo, you'll find an unassuming little stall where you can buy the famous sfogliatella pastry; you can buy them all over the city but Neapolitans are fussy about having the best and are always willing to make the extra effort to get that extra quality.

Coffee is something else that takes on almost religious proportions in Naples and you can find one of the city's best cafes just a few steps away from the Galleria. At the corner of Via Toledo and Piazza del Plebiscito stands the Gran Caffè Gambrinus, an historic establishment with immaculately-dressed baristas and of course, wonderful, strong coffee. Most Neapolitans and indeed, most Italians in general just drink a small espresso, standing at the bar for no more than a few minutes before continuing with their day. You can of course get a cappuccino and other types of coffee but one you won't see on the menu in many places in the world is a caffè sospeso. It translates as "suspended coffee" but is in effect, a coffee you buy as an act of charity for a complete stranger that's yet to enter the bar.

​Step outside Gambrinus and you'll find a whole host of sights to enjoy in every direction. One that's not always given top-billing by the guide books but in my opinion should be, is the Galleria Borbonica. Its entrance is just a short walk from Piazza del Plebiscito and offers an extraordinary view of the city. The Galleria Borbonica is an underground network of tunnels built by the Bourbon royal family that came to be used for a number of reasons. Among them, its history as a bomb shelter during World War Two means you can quite literally step back in time and see the vehicles of the era such as vintage taxis and vespas, rusting away in the caves. The tunnel complex also conceals the harrowing tales of the people who strived to survive under the most difficult of circumstances.

The Galleria Borbonica is just one example of the fascinating Underground Naples attractions. One of the city's most popular sights is Napoli Sotterranea, a complex network of cisterns and aqueducts, so crucial to the development of the city that now offers a fascinating insight into its past. Also underground but offering a different perspective on life are the various catacombs, ancient burial sites from which we have been able to learn so much about life in the city throughout history. There are few cities, if any, that can also offer the spectacle of the Cimitero delle Fontanelle, a slightly macabre series of tunnels where thousands of impoverished plague victims were buried and whose bones are now on display. The bones and skulls attract offerings from the living in the hope of good luck, underpinning that superstitious nature of the city's residents.

​One of the main thoroughfares in Naples is Via Toledo, which confusingly, is also sometimes referred to as Via Roma. This is the main shopping street in the city and leads up to the centro storico, the historic centre. For many people, this is the real heart and soul of Naples; a series of narrow streets packed with shops, restaurants, apartments and life in general. This is one of the most vibrant areas in Italy where market traders call out their wares while locals argue the topics of the day in tiny bars. Affectionately known as Spaccanpoli, "Split Naples", the officially-named Via Benedetto Croce is one of three streets built on the Roman principle of Decumanus. From above, Spaccanapoli does indeed give the effect of splitting Naples, while the central street just above it is called Via dei Tribunali - once the Decumanus Maggiore.

The streets of the centro storico are home to numerous of the city's most important sights and you can easily spend a day just in this area alone, uncovering all of their little secrets. Not so secret is the famous work known as the Cristo Velato, the "Veiled Christ", an exquisite sculpture that seems to have an almost life-like quality. The Cristo Velato is on display at the Sansevero Chapel Museum and there are further religious museums to enjoy within a short walking distance. Among the best of are the Chiesa di Santa Maria Donnaregina Vecchia and the beautiful Santa Chiara complex.

Perhaps one of the most representative sights of Naples is Via San Gregorio Armeno. The narrow street is always packed with a sea of people trying to get a glimpse of the presepe, nativity scenes that also have a modern-day flavour with amusing models of current celebrities on display. What's most remarkable about this street however, is the unassuming entrance to the Chiesa di San Gregorio Armeno; the small church is one of the most beautiful in the city, but somehow opens up onto an expansive site with a beautiful garden at the centre of a monastery. The peace and quiet here is in stark contrast to the hustle and bustle just outside its main doors.

​The most important religious building in the city is Naples Cathedral which is home to the Cappella di San Gennaro; the chapel dedicated to the city's patron saint. Once a year, a hugely important ceremony takes place in the city where the blood of San Gennaro is brought out to see if it will liquefy. If the blood does liquefy, it means good luck for the city and the ritual is therefore attended by thousands of people, eager to know how things will turn out for the year ahead.

Naples National Archaeological Museum, just a short distance from the centro storico, is considered one of the finest museums of its kind in the country. A little further out from the city centre lies one of the best museum galleries in Italy: the Royal Palace of Capodimonte where the classics are mixed in with contemporary artists. Naples can also boast three castles: close to Piazza del Plebiscito is Castel Nuovo while a walk along the seaside promenade eventually brings you to Castel dell'Ovo, the "castle of the egg" within which lies an important egg. As long as the egg survives, so will Naples!

The third castle lies in an area called Vomero. This is an area of well-heeled residents and upscale shops that sits on a hill overlooking the city centre. From Vomero's Castel Sant'Elmo you can get some of the best views of the city below. You can also visit the Certosa di San Martino next door or simply loiter at the Belvedere San Martino, a viewing area with further panoramas of Naples and Mount Vesuvius looming menacingly in the background.

Not only is Naples the cultural capital of the south of Italy, it's also one of the country's most important travel hubs. Firstly, Naples International Airport helps transport travellers directly to the city from Europe and beyond. From there you can take a bus to Napoli Stazione Centrale, the central train station with rail links to Rome and all of Italy's most important cities. Naples also has an important port from which you can take ferries and hydrofoils to the nearby islands of Ischia, Procida and Capri. You can also sail down the coast to the Sorrento Peninsula and beyond to the Amalfi Coast. There are numerous other ferry routes available from Naples including destinations in Sicily and Sardinia.

One of the most remarkable aspects of Naples is its underground Metro system. The modern rail network offers a quick and efficient means of travelling around the city, but its set apart from equivalent systems in other cities by its beauty. A number of "art stations" make up the network with some weird and wacky designs on display at stations such as Toledo and Università, showing Naples as the modern metropolis it is and perhaps helping to dispel certain stereotypes that have become stuck to it over the years.

Things  to  see  in  Naples 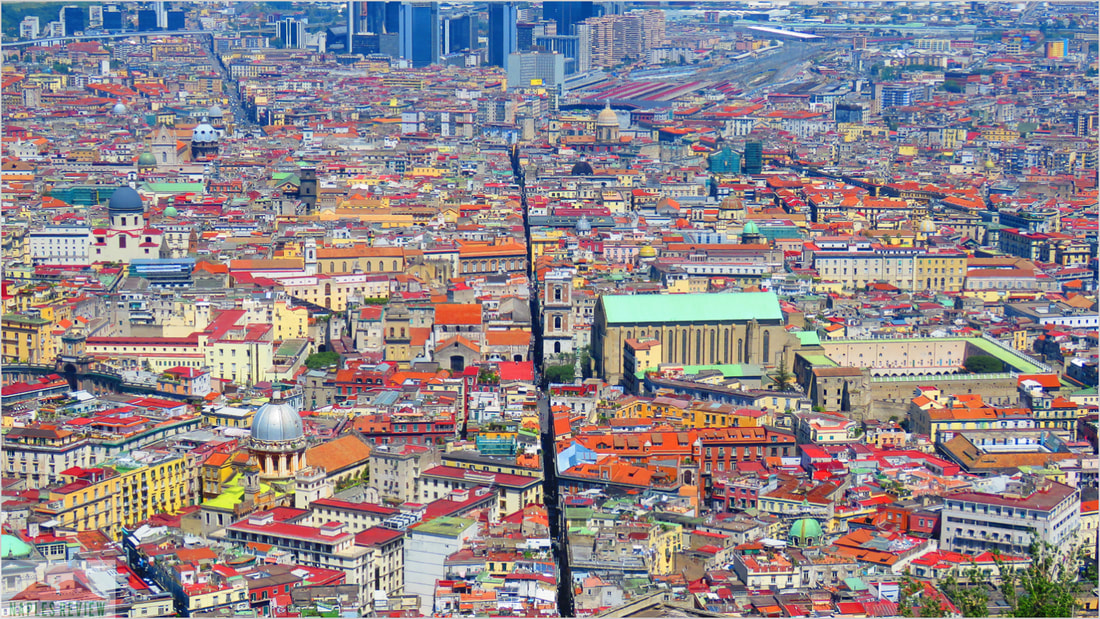