Everything starts with the wonderful Piazza Grande that marks the town centre, both horizontally and vertically. From here you can look out from a balcony to the rooftops below, enjoy a drink at one of the piazza's cafes, or explore its two main buildings: the Palazzo dei Consoli and the Palazzo Pretorio. The two buildings are Renaissance gems, built in the fourteenth century. The Palazzo dei Consoli houses the Museo Civico and the Palazzo Pretorio is the official headquarters of the Comune (municipality). 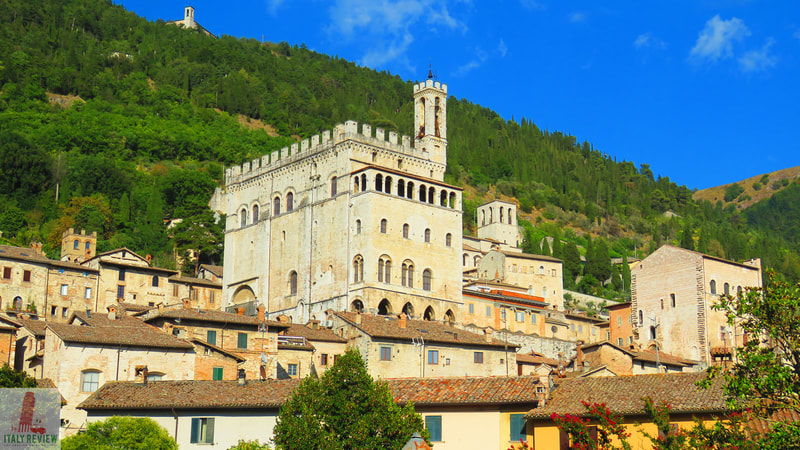 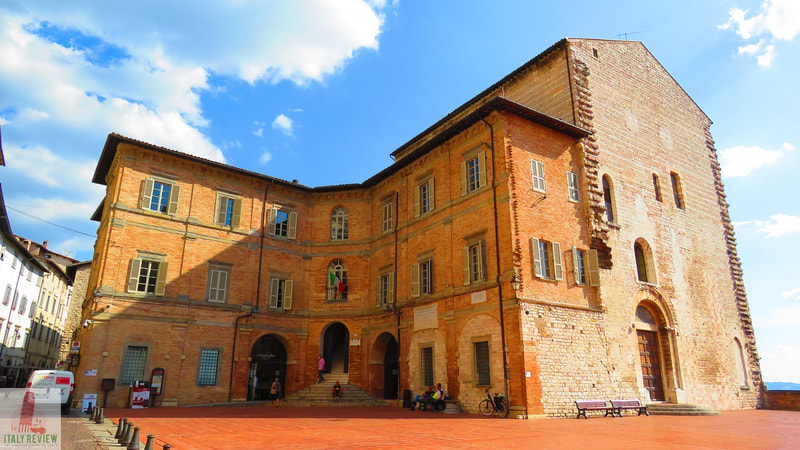 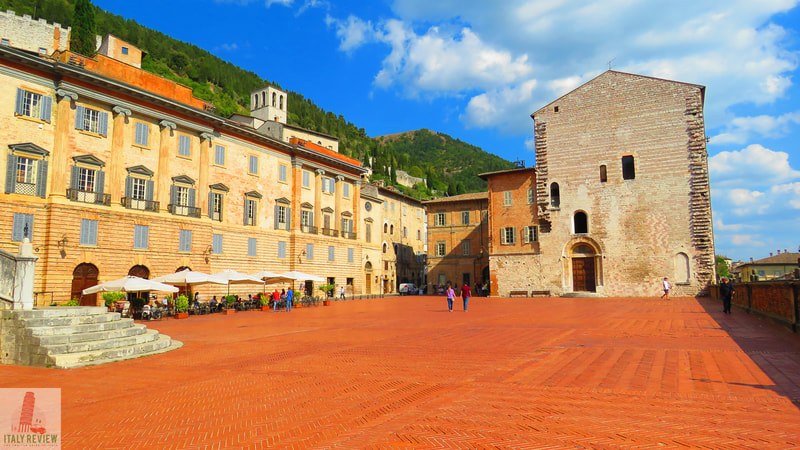 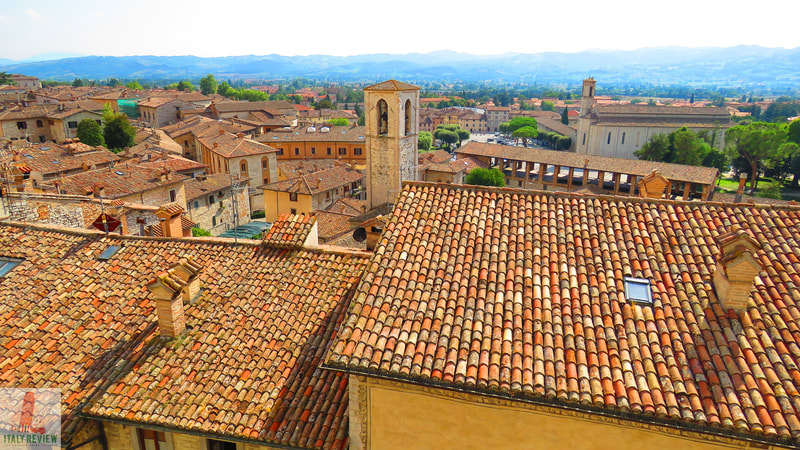 From this central area or middle tier of the town, it's possible to take a lift to an upper tier with its own series of sights. The lift is located on Via XX Settembre and free to use. Within a few minutes you're transported to an upper level of the town with the main focus here being the beautiful twelfth century Gubbio Cathedral and the adjacent Palazzo Ducale.

Fully-titled as the Cattedrale dei Santi Mariano e Giacomo, the Cathedral is the first building you enter after exiting the lift. When you exit the Cathedral, it's just a few metres across a tiny piazza to the Palazzo Ducale; a gap so small that makes it difficult to fully appreciate the Cathedral's facade. Just outside the Palazzo Ducale are the Giardini Pensili or "Hanging Gardens" which provide a similar view of Gubbio's rooftops as that seen from Piazza Grande, just from a higher level, but also including the top of the iconic Palazzo dei Consoli. 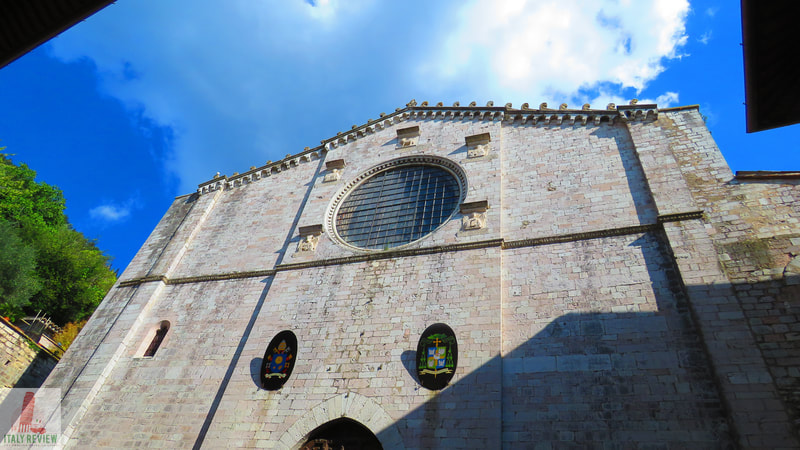 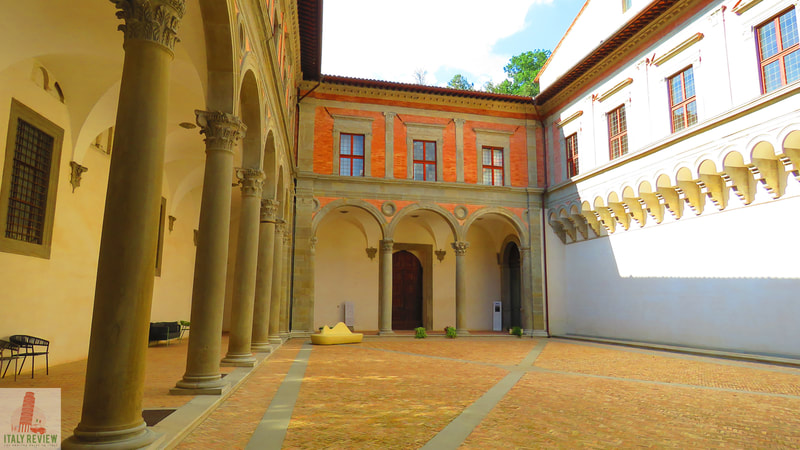 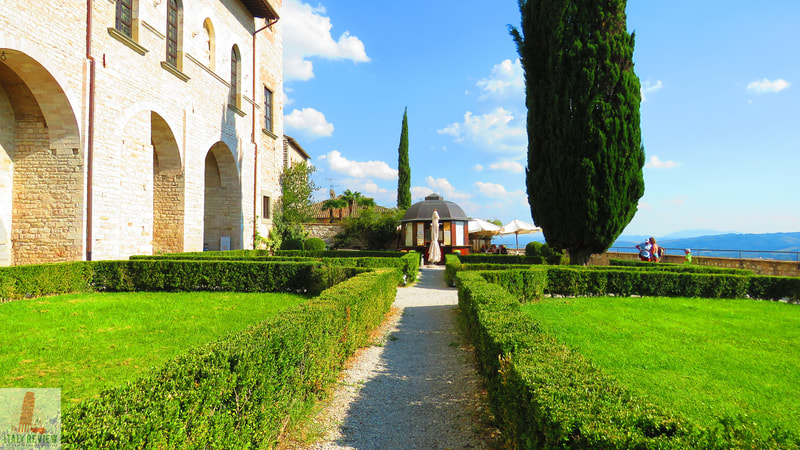 ​An itinerary of Gubbio goes on to include numerous more sights in addition to, as well as including those listed above. A sensible point from which to start any itinerary of Gubbio is Piazza dei Quaranta Martiri: so-named after an incident during World War Two when forty of the town's inhabitants were shot by the German army.

Away from its tragic past, Piazza dei 40 Martiri is the transport hub of the town and the most likely place for you to arrive. On one side is a barrier car park where you take a ticket on entry and pay at the end; this is an ideal place to park as you're not then restricted by a time limit. Piazza dei 40 Martiri is also home to a bus stop as well as attractive gardens and the Chiesa di San Francesco.

1. Proceed up the hill along Via della Repubblica for 100 metres and then turn left on to Piazza San Giovanni. This takes you to the Chiesa di San Giovanni, famous for many Italians as it appears it the hit TV series Don Matteo which is shot on location in Gubbio.

2. Return to Via della Repubblica and then turn left, continuing up the hill for another 100 metres until you reach a staircase at the top of the street. At this point you can either use the public lift, or climb the ornamental staircase for a few minutes to reach the central tier of the town. The staircase is the scenic route for sure and the effort required rewarded by the attractive surroundings.

3. At the top of the staircase or upon exiting the lift, turn left and you'll arrive at Piazza Grande. This really is the heart of the town and central to everything. Its main sights include the Palazzo dei Consoli, the Palazzo Pretorio and the Palazzo Ranghiasci that lines the back wall. Fans of the aforementioned Don Matteo will urge you to gran a drink at the Caffè Ducale, another famous spot where the TV show is filmed. You can pause for a moment there and then wander over to the balcony to take in the views. Within the Palazzo dei Consoli is the Civic Museum which you can pay to enter if you wish to visit.

​4. From Piazza Grande you can retrace your steps to the top of the staircase, beyond which is another lift that takes you up to the next level of Gubbio. Upon exiting the lift, you can visit first the Cathedral, followed immediately by the Palazzo Ducale. Exiting the Palazzo Ducale you can take in the views from the Giardini Pensili where there is also a little bar area. 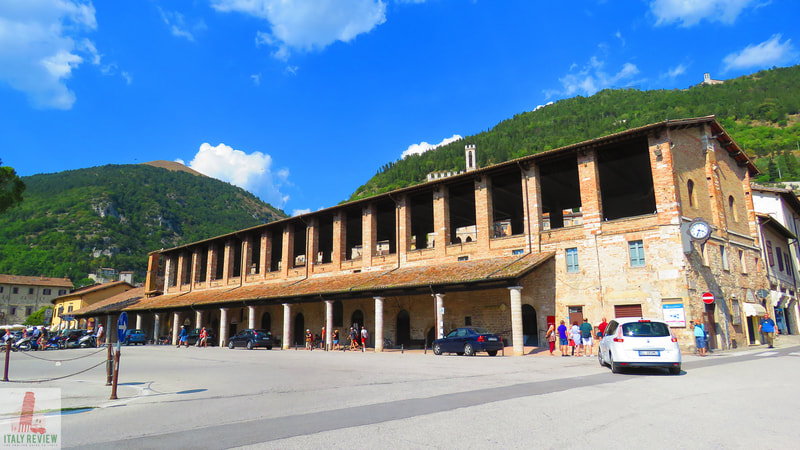 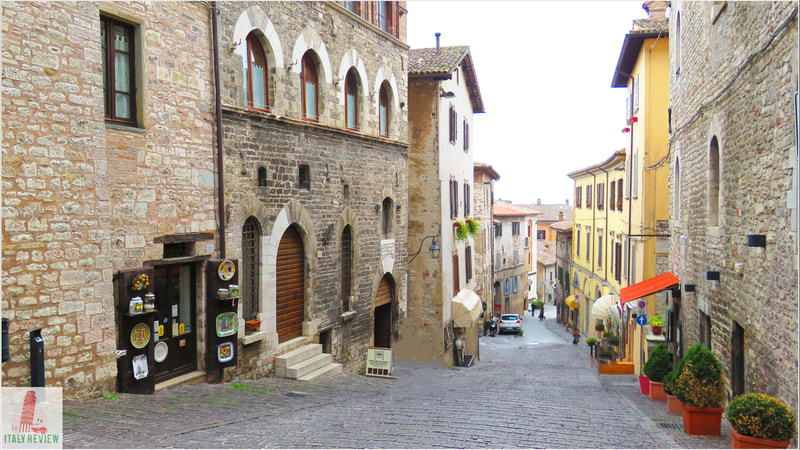 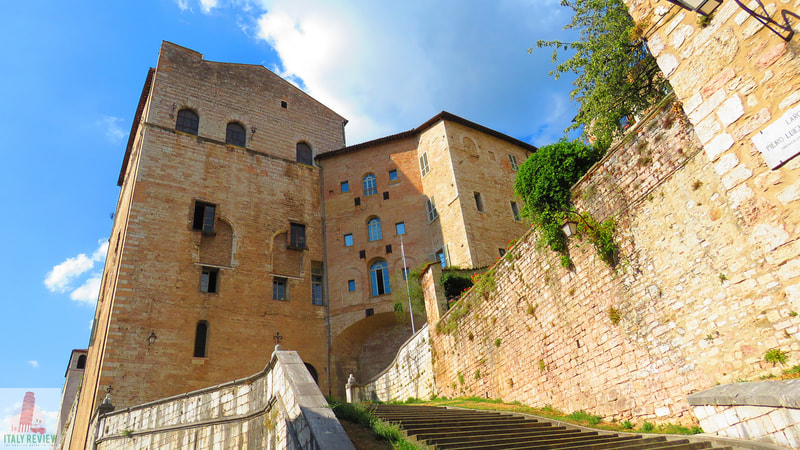 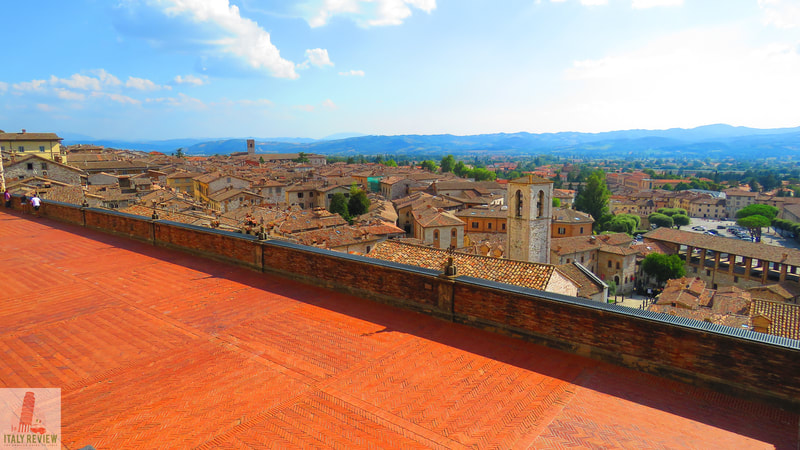 At this point, there is the option of visiting the Basilica di Sant'Ubaldo which lies two kilometres up the hill, a fairly strenuous walk of around 45 minutes. Another way to reach the Basilica is by taking the cable car system which is essentially a cage that you stand in. The Funivia Colle Eletto as the cable system is called, takes six minutes to reach the Basilica di Sant'Ubaldo but it does require a ten minute walk to reach it from Gubbio Cathedral. Another option is to park the car at the Funivia car park at the end or beginning of your visit.

5. So, whether you decide to visit the Basilica di Sant'Ubaldo at this point or not, we can continue the itinerary. From the Giardini Pensili you turn left, through the tunnel that forms part of the Palazzo Ducale, and reach a pathway known as La Ripa. This is a scenic path that takes you above the rooftops of the main town with some nice views along the way. There's a park here called the Parco Ranghiasci, after which, the path veers around to the right, before a stone bridge that crosses the dry river.

6. After you've crossed the stone bridge, turn right under the archway and you'll arrive at the Porta Metauro city gate. Turn left and you can see one of the oldest buildings in Gubbio: the Palazzo del Capitano del Popolo which was built between the 13th and 14th centuries.

7. From the Palazzo del Capitano del Popolo, walk south along Via Gabrielli for 200 metres until you reach a small square called Piazza Giordano Bruno. This is an attractive and historic part of the town where the buildings are adorned with the flags of the various quartieri or neighbourhoods. The main building on the Piazza is the Chiesa di San Domenico with its curious facade that looks like an optical illusion; you'll almost certainly look at it and blink, before losing again because it looks like two buildings spliced together or a terrible piece of work via Photoshop!

8. The Piazza Giordano Bruno is a good place to stop with a choice of bar and restaurant to sit at before pondering your next move. You could end the walking tour at this point and make your way back to Piazza dei 40 Martiri by heading south along Via Cavour through an historic residential neighbourhood. Alternatively, you can make you way along Via dei Consoli and back to Piazza Grande. 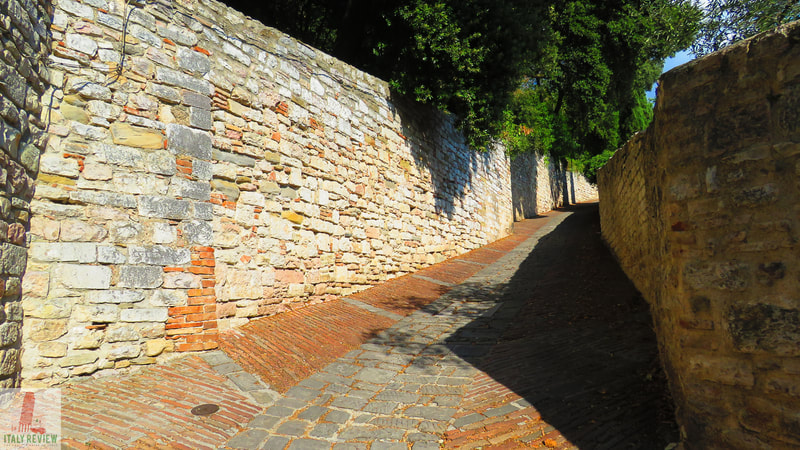 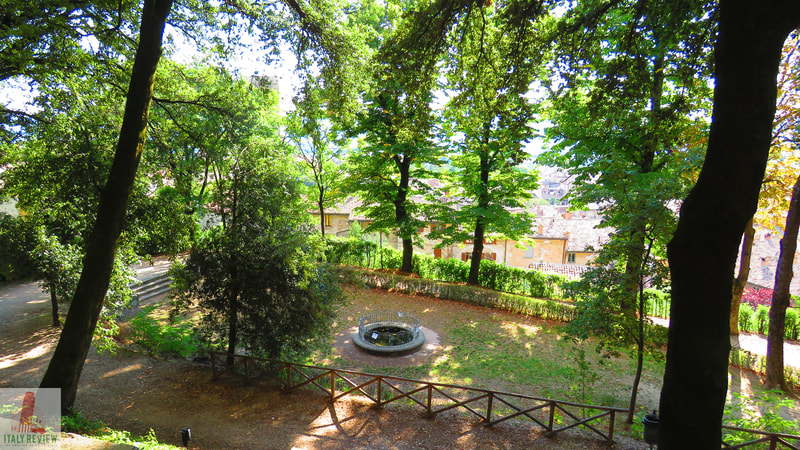 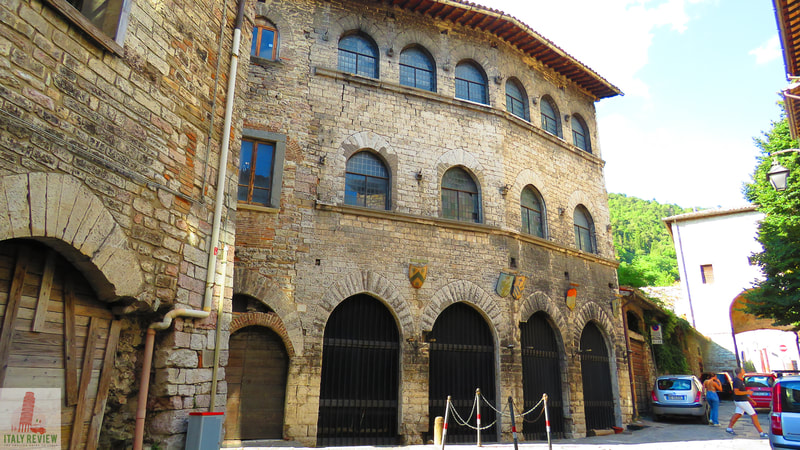 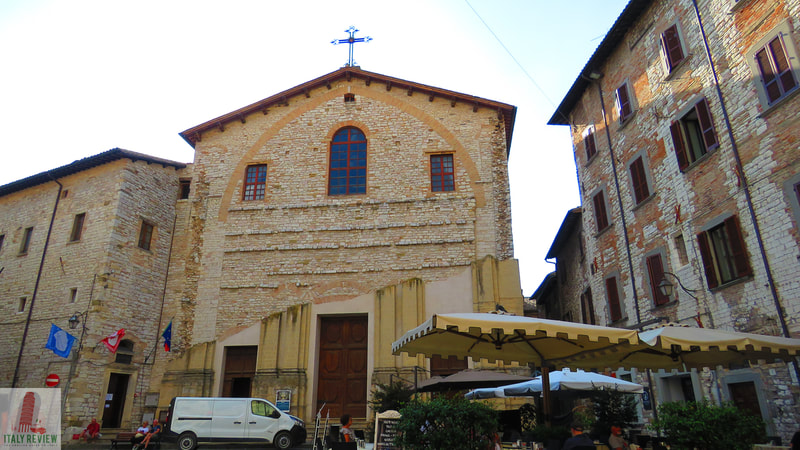 Porta dei Morti on Via dei Consoli and Via della Repubblica

The route back towards Piazza Grande is the more interesting option and although it's mostly uphill, it's only for around three minutes from Piazza Giordano Bruno. Along the way you'll pass shops selling the typical food products of Gubbio which include truffles, salami and the strangozzi pasta which is usually served with a wild boar sauce or ragù.

Also, keep your eyes peeled for an unusual architectural feature called porta dei morti or "doors of the dead". Beside the main entrance to some buildings in Gubbio, on Via dei Consoli and Via della Repubblica among others, you'll see a second, narrower entrance that's raised above the ground. They're either bricked-up now or turned into a more decorative feature such as a window.

​Their original purpose is speculated over, with the name suggesting they were doors through which you would pass the dead bodies of deceased family members. That theory is said to be unlikely, while another idea is that they were used as a means of defence with the narrower walkway more difficult to penetrate and the raised level providing a disadvantage to any would-be assailant. ​​
Comune di Gubbio
The Comune of Gubbio is an official municipality in Umbria's province of Perugia. In 2021 it had a population of just over 31 thousand inhabitants. It stands at an elevation of 522 metres above sea level and occupies a territory of 525 km². The town's highlights include the main square: Piazza Grande and the main building on the square, the Palazzo dei Consoli which houses a museum. It's possible to take an open cable-car system to the Basilica of Sant'Ubaldo which overlooks two more of the town's main sights: Gubbio Cathedral and the Palazzo Ducale.

Typical dishes of Gubbio are based around various types of pasta, of which strangozzi, pappardelle and fettuccine are the most-widely used. Some of the favourite ingredients used within the pasta dishes are truffles (tartufi), wild boar (cinghiale) and mushrooms (funghi). The top-rated restaurant in Gubbio is the Orto Osteria della Terra and the recommended accommodation the Park Hotel Ai Cappuccini. The main annual event in Gubbio is the colourful Corsa dei Ceri which takes places on May 15. The following day, May 16 is the saint's day of Gubbio's patron saint: Ubaldus (Ubaldo).

Gubbio occupies a position in the hills at the eastern edge of Umbria, close to the border with the neighbouring region of Marche. The places of most interest around Gubbio are split between the two regions: heading east, the Marche region can offer the historic town of Fabriano or the smaller but charming Sassoferrato.

Directly south of Gubbio are two of Umbria's most famous destinations: the UNESCO World Heritage town of Assisi with all of its religious monuments, and the Umbrian capital of Perugia with its intriguing medieval centre. To the north-west of Gubbio lies another historic town in Umbria: Città di Castello, while for something completely different, you can head to Lake Trasimeno, Italy's fourth largest lake with resorts such as Passignano sul Trasimeno and Castiglione del Lago around its edges. 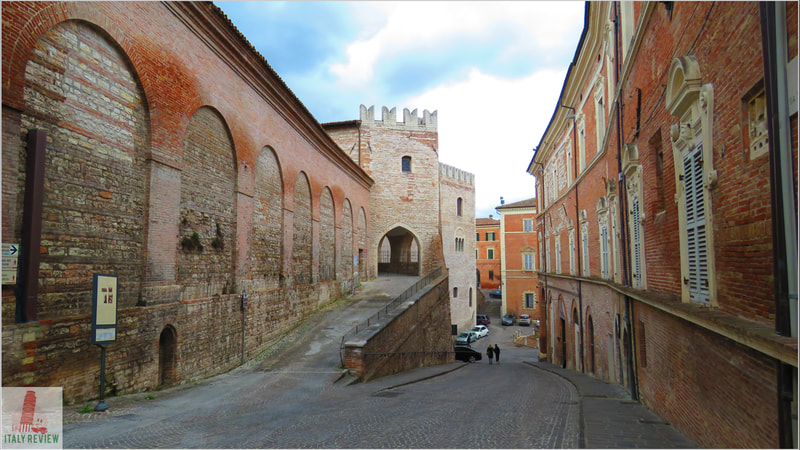 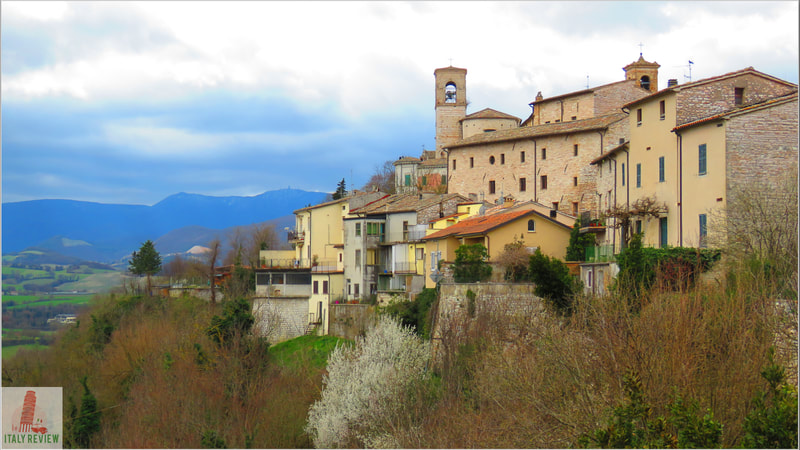 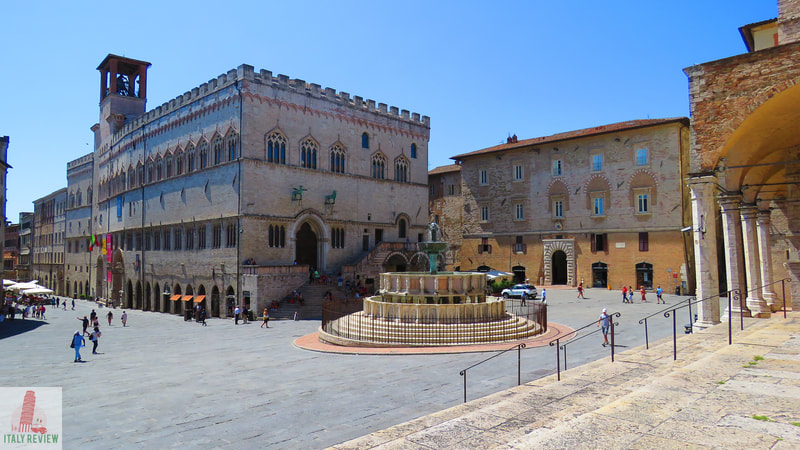 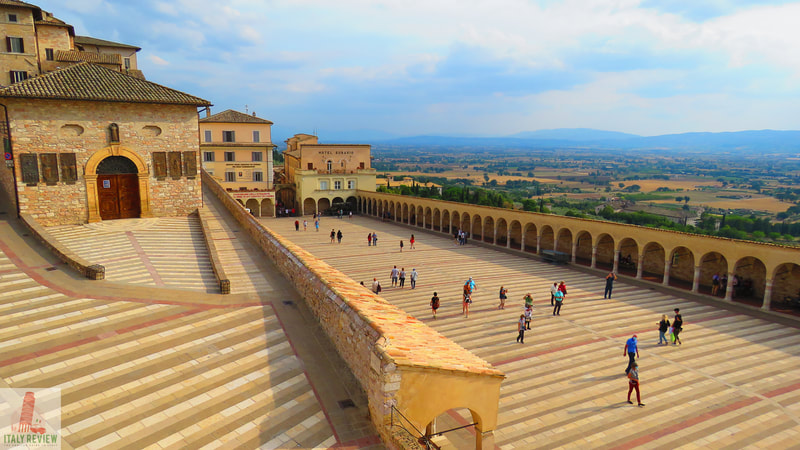 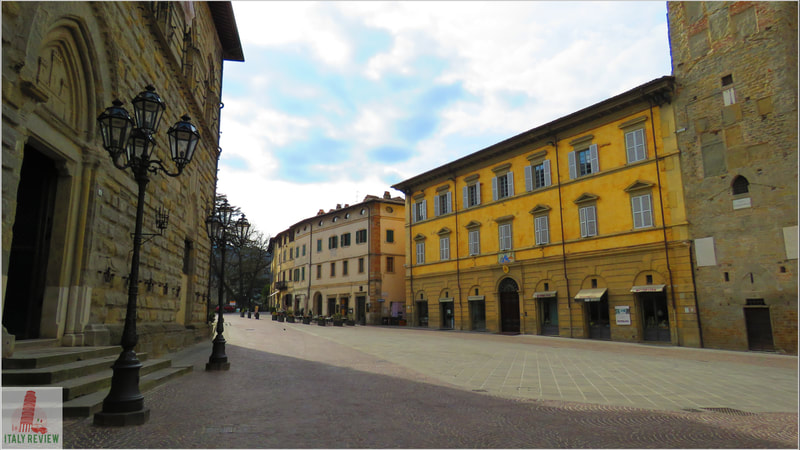 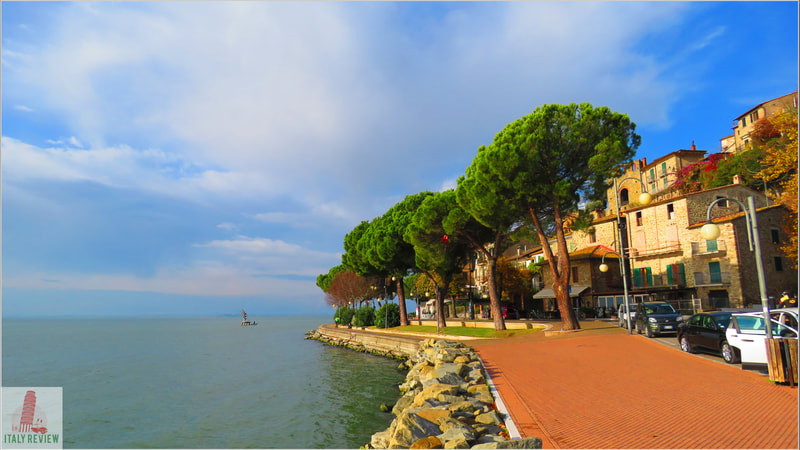 Gubbio's train station is a twenty minute drive south-east of the town itself. There is a bus service but they're not particularly frequent and take nearly forty minutes to reach Gubbio so a taxi is the best option and there is a taxi rank outside the station.

Heading south from Fossato di Vico Gubbio you can reach Rome in around two and a half hours. The same train that runs south to Rome makes its reverse journey to the city of Ancona, the capital of Marche on the Adriatic Coast to the north-east. For destinations such as Perugia or Florence, it's necessary to change trains at Foligno.

Of the numerous airports that you could consider flying into for a trip to Gubbio, the closest by some distance is Perugia Airport which is just over half an hour away. It works well if you're coming from south-east England as there are flights with Ryanair out of Stansted. For other areas of Europe, Perugia Airport is more limited and that's also the case with Marche Airport and Rimini & San Marino Airport which are the next nearest. To reach Gubbio from Italy's main airport: Rome Fiumicino, is a three hour drive.

​Driving to and from Gubbio is fairly straightforward; the town isn't particularly close to any of Italy's motorways but the next level of road down, the Strade Statali (SS) flow quite nicely for the most part and are usually dual carriageways. It takes around three quarters of an hour to reach the Umbrian capital of Perugia, two and a half hours to Florence, or around two and three quarter hours to Rome.

There are good parking options in Gubbio including barrier-operated car parks where you can pay at the end or street parking where you pay and display your ticket.