Brunico is part of the South Tyrol province in northern Italy and situated around 25 kilometres south of the international border with Austria. The area around Brunico is known as the Puster Valley (Val Pusteria in Italian or Pustertal in German) and is characterised by Alpine pastures, forests and lakes.

The area to the south of Brunico is dominated by the Dolomites mountain range with its distinctive jagged peaks and mountain passes, while running through the town itself is the River Rienz which stretches towards Dobbiaco. Another body of water, the Torrente Aurino stream, comes from the west and navigates around Brunico, north towards the Austrian border; an area known as the Valle Aurina.
Sightseeing

The main sight in Brunico is the 13th century Castello di Brunico: a hilltop fortress that's open to visitors and includes a museum about mountain life. The castle can be reached either by car, or from a path leading up from the town centre, albeit quite steep.

Aside from the hilltop fortress, there are two particularly striking buildings in the main, lower town. The 13th century Chiesa di Santa Maria Assunta (Pfarrkirche Bruneck) has a bright yellow facade with two huge clock towers that can be seen for miles around. Its bright and colourful interior is just as impressive. With its facade painted in a similar colour, the 15th century Chiesa del Salvatore alla Orsoline (Ursulinenkirche), is a Gothic style church situated on the other side of town. ​ 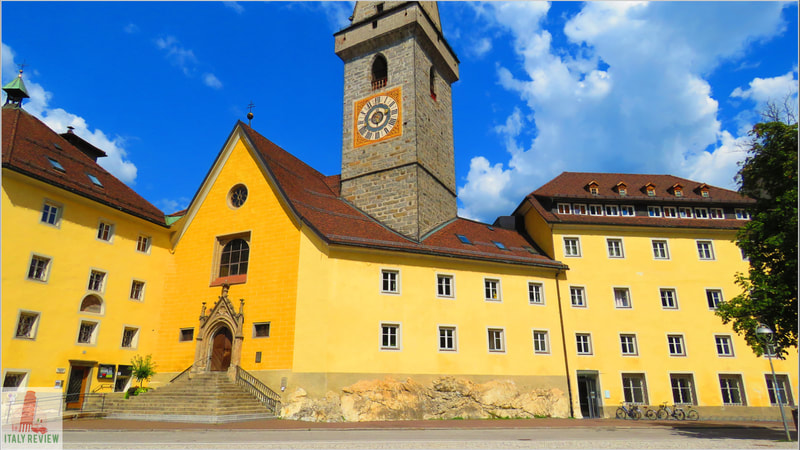 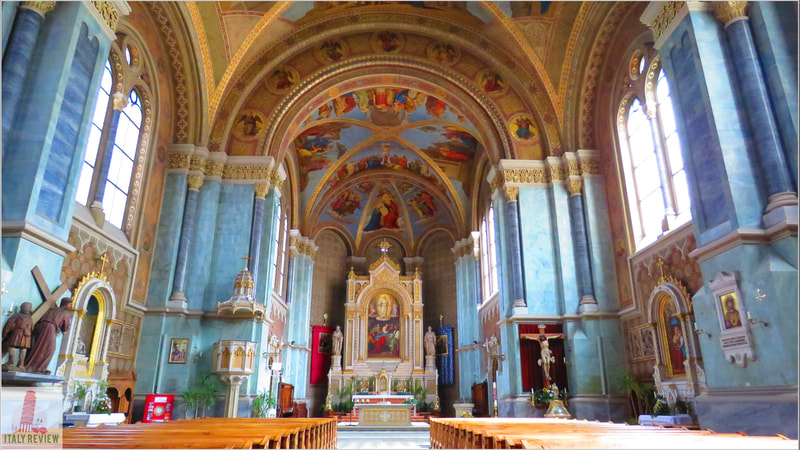 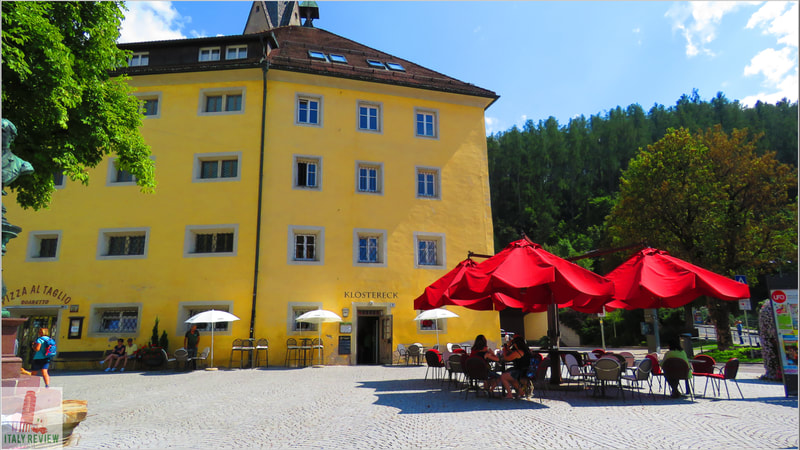 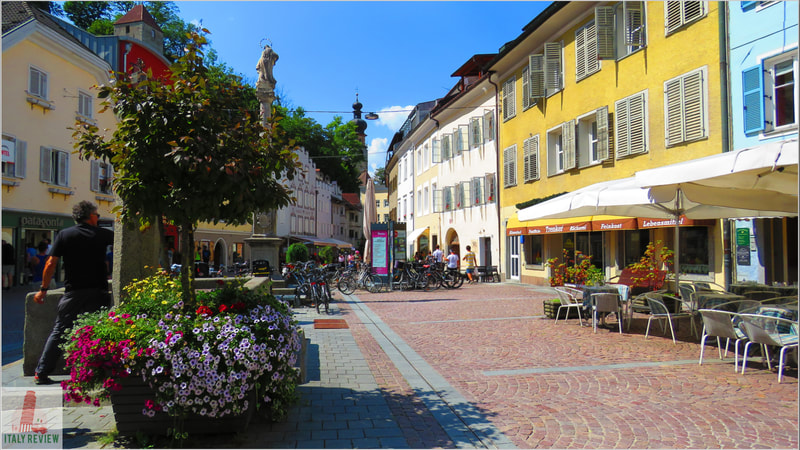 Via Ragen di Sopra, Brunico
The Ursulinenkirche curves round onto Via Bastioni, a wide shopping boulevard, resplendent with polychromatic shop-fronts and street side cafes. This is the modern part of town that surrounds the centro storico which has several access points. To the right of the Ursulinenkirche is one of four medieval city gates, called the Ursulinentor. Each of the city gates is painted with beautiful frescoes and when you pass underneath the Ursulinentor, you enter the historic centre of Brunico.

​Via Centrale is a narrow, pedestrianised shopping street with its own colourful shops, some of which are decorated in frescoes. A very pleasant five minute walk along Via Centrale eventually brings you to the beautiful square called Via Ragen di Sopra where you'll find a clutch of al-fresco drinking and dining options.

​Before you reach the square you'll have passed through another of the city gates, this one called the Unterrainer and it's from here that you can join the path to walk up to the castle. The Chiesa di Santa Maria Assunta can be reached by continuing on past the square on Via Ragen di Sopra. The River Rienz flows through Brunico town centre and a riverside walkway called the Passeggiata Tielt provides another area of interest. 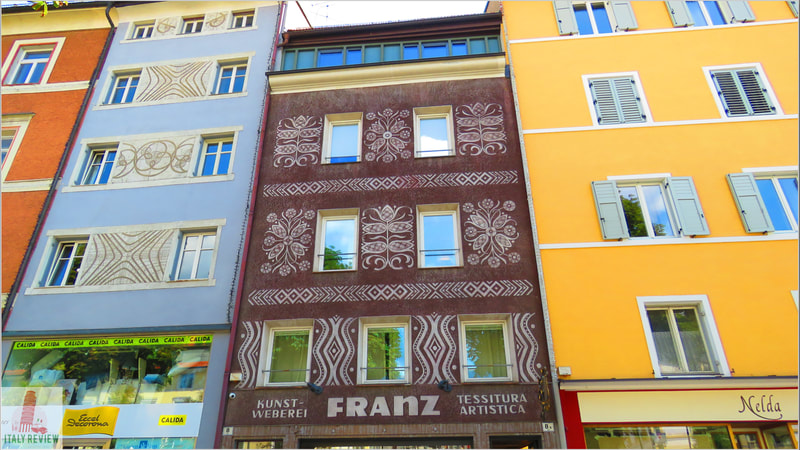 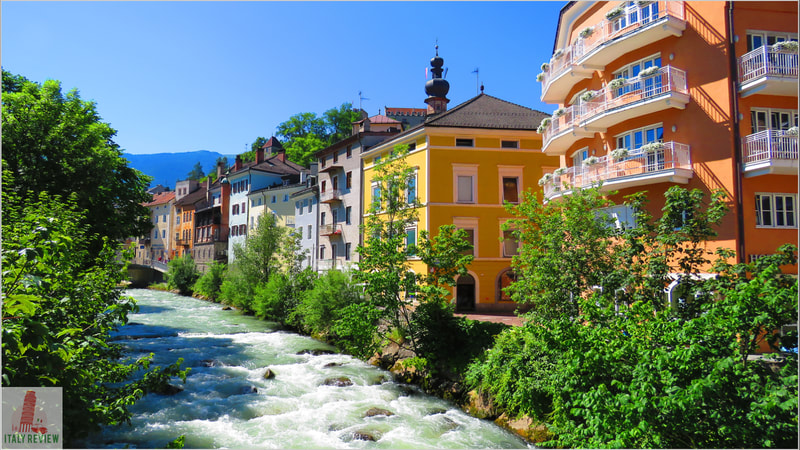 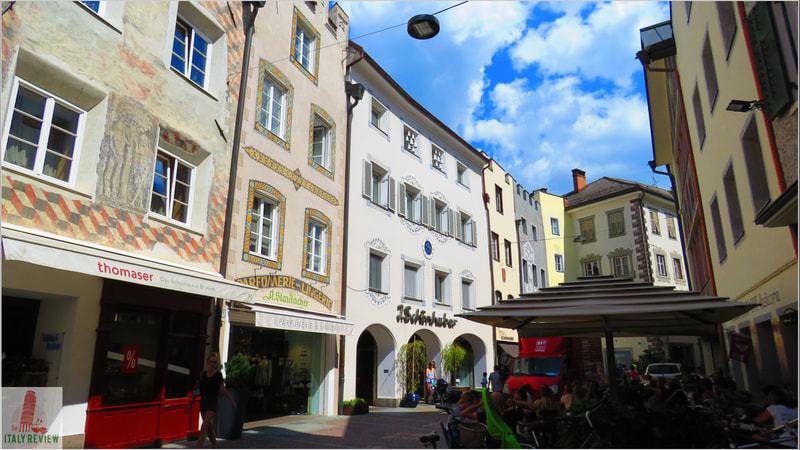 Via Centrale, Brunico
Getting to Brunico

Brunico's train station is situated half a kilometre west of the town centre and reachable on foot in around six minutes. Trains run south and west towards Bressanone and Bolzano with a change necessary at the town of Fortezza (Franzensfeste).

Driving around Brunico in the summer is a delight with some of Italy's most spectacular mountain scenery. You can drive through the Dolomites to the ski resort of Cortina in just over an hour, or south west to the region's two provincial capitals: Bolzano and Trento.

During the winter, the mountain roads can be treacherous and some careful consideration is required before undertaking a journey. Snow-chains are obligatory throughout the winter and there are occasions where roads close temporarily if they are deemed unsafe due to heavy snowfall. That said, the main roads between Brunico, Bolzano and Trento are well-maintained, gritted and present relatively few problems.
Comune di Brunico
Brunico is a mountain town of the South Tyrol province in northern Italy. In 2021 it had a population of just over seventeen thousand. It stands at an elevation of 838 metres above sea level and covers a total area of 45 square kilometres.

Sightseeing highlights include the Castello di Brunico, the Chiesa di Santa Maria Assunta and the Via Centrale shopping street. The top-rated restaurant is the Albergo Oberraut which features in the Michelin guide while the recommended accommodation is the Hotel Post Alpine Cityflair. The weekly market in Brunico takes place on Wednesday mornings.

The area around Brunico provides a mixture of mountain scenery, stunning lakes and a cluster of beautiful towns. One of the main attractions for a stay in Brunico is to use it as a base from which to visit Lake Braies, otherwise known as Prager Wildsee in German and an integral part of the Fanes Sennes Prags Nature Park. A similar distance east of Brunico brings you to Dobbiaco (Toblach), a pretty mountain town with a distinctive green church, and the eponymous Lake Dobbiaco just a few kilometres away.

Directly south of Brunico is the Plan de Corones (Kronplatz) mountain and ski resort, while heading in the opposite direction are a number of smaller villages such as Valle Aurina which lies close to the Austrian border. To the west of Brunico is one of the larger towns in Trentino Alto Adige South Tyrol: Bressanone (Brixen), whose attractions include a giant cathedral and a colourful town centre. 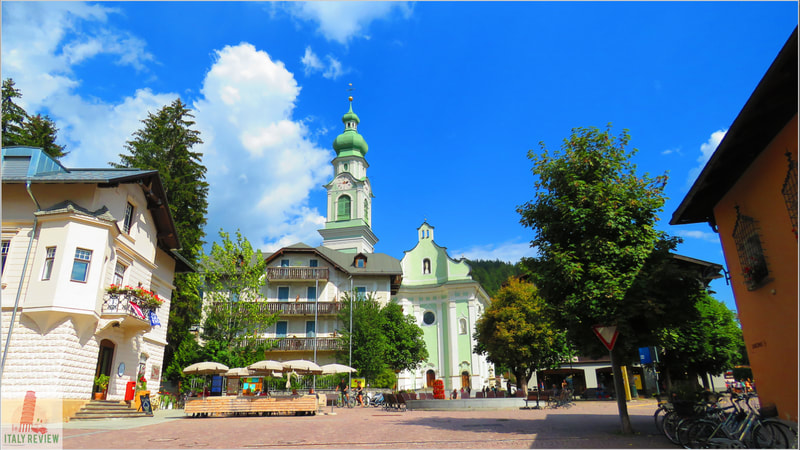 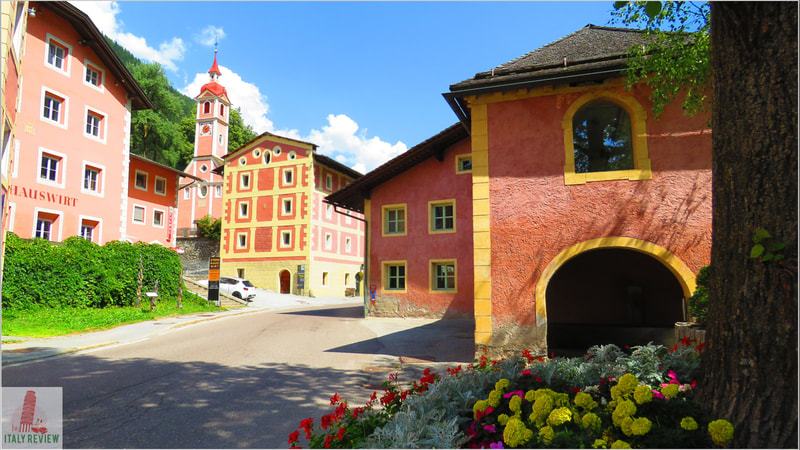 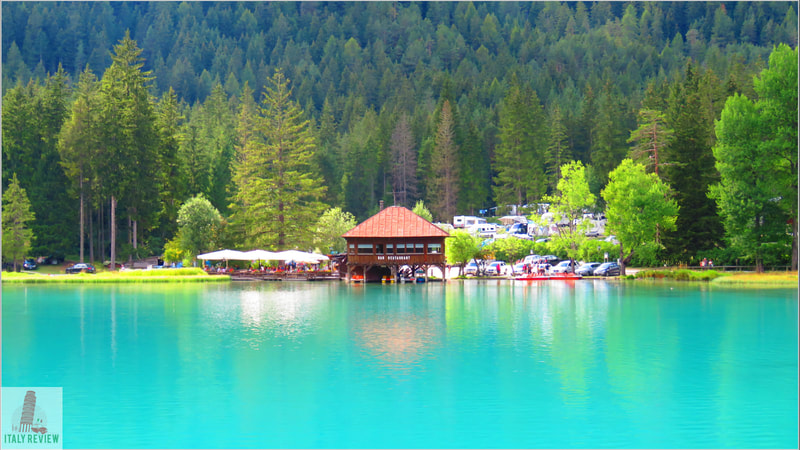 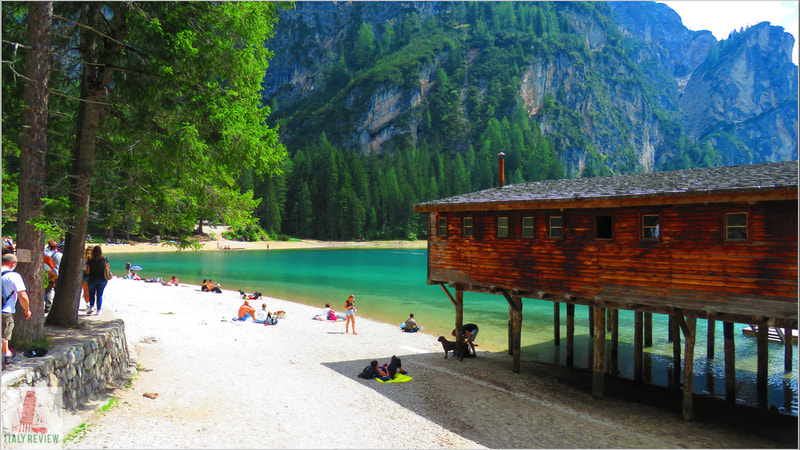 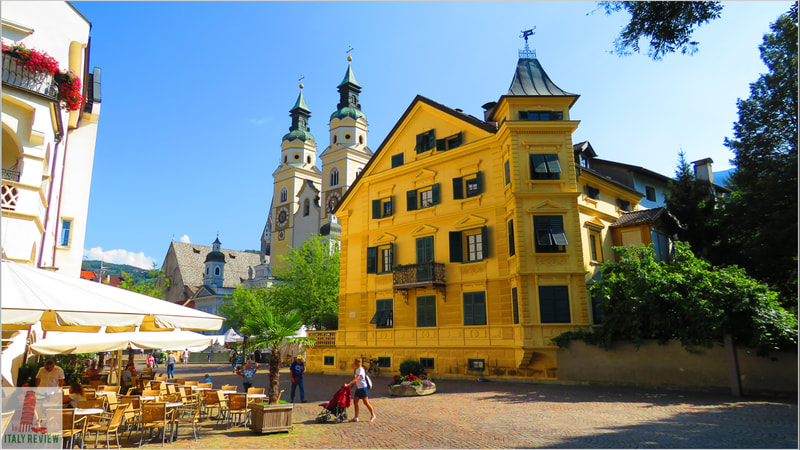 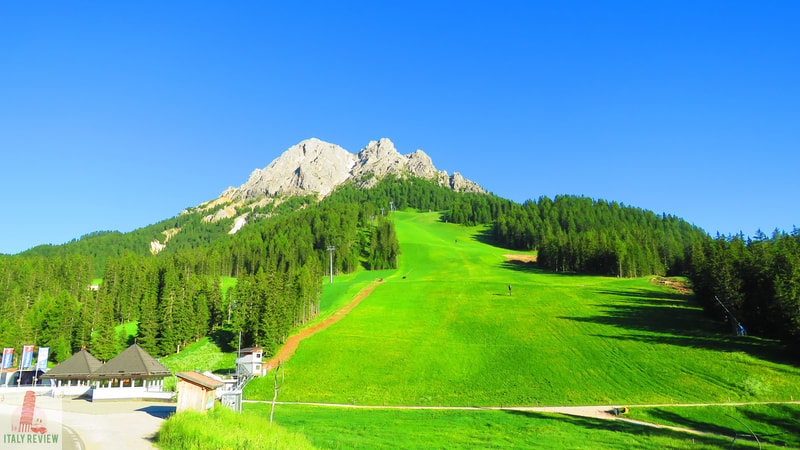