Aosta: the Roman Fortress of the Alps

Aosta's geographical location was the reason for its foundation and for its continued prosperity. It was originally established as a Roman fortress to guard the mountain passes to the north and the west. Of great value to the Romans and indeed future generations, were the two rivers that bound the city to the east and the south. The River Buthier marks the eastern boundary while the larger River Dora Baltea flows to the south of the city centre on an east-west trajectory between Mont Blanc and Piedmont.

The city of Aosta lies at the heart of the main valley that runs through the region from east to west, with everything to the north and south of the city requiring a steep climb through the mountains. Eighteen kilometres north west of Aosta lies the Grand Saint Bernard Pass at an altitude of 2,469 metres, marking the international border between Italy and Switzerland. Further to the west (33 km) lies the border with France and the Mont Blanc Tunnel.

The area to the south of Aosta is dominated by the Gran Paradiso National Park which reaches an altitude of 4,061 metres above sea level and marks the regional border with neighbouring Piedmont. To reach Piedmont by road however, requires a 40 minute drive (50 km) south-west of Aosta towards the town of Ivrea.
Brief history

Aosta was founded by the Romans in 25 BC as a defensive stronghold, garrisoned by around three thousand Praetorian guards. It was established in the wake of a victory over the Salassi, a Gallic tribe that occupied the area around the Dora Baltea river. At its inception, the town's name partially included that of the tribe with the full title of Augusta Praetoria Salassorum, which has eventually given way to Aosta.

In later years, Aosta was ruled by the Burgundians, Ostrogoths, Lombards and Franks. Under the Frankish king and Holy Roman Emperor Charlemagne, the city of Aosta was a staging post along the Via Francigena which connected it to Aachen in modern-day Germany, which at the time was the capital of the Holy Roman Empire.
Sightseeing

Aosta has a remarkable series of Roman monuments which are integrated well into the fabric of the modern city. Originally built on a typical Roman grid plan, its eastern edge is marked by the Arch of Augustus, a triumphal arch built in honour of the Emperor to mark the establishment of the town in 25 BC.

The Arch now stands at the centre of a roundabout on the city's road network, close to the River Buthier that runs along the city's eastern periphery. In the same area of the city you can see, and actually walk across the Ponte Romano, the Roman Bridge which once spanned the river but now traverses an area of dry land.

From the Arch of Augustus it's a five minute walk to Aosta's Ancient city gate, the Porta Praetoria. The complex structure is largely intact and now fully integrated into the main pedestrian walkway of the city centre. It also houses the official tourist office for Aosta from where you can buy tickets to the main attractions. Of those main attractions, the highlight is the Roman Theatre of Aosta, an archaeological site that includes the 22 metre high facade of the theatre and its smaller, outer buildings. 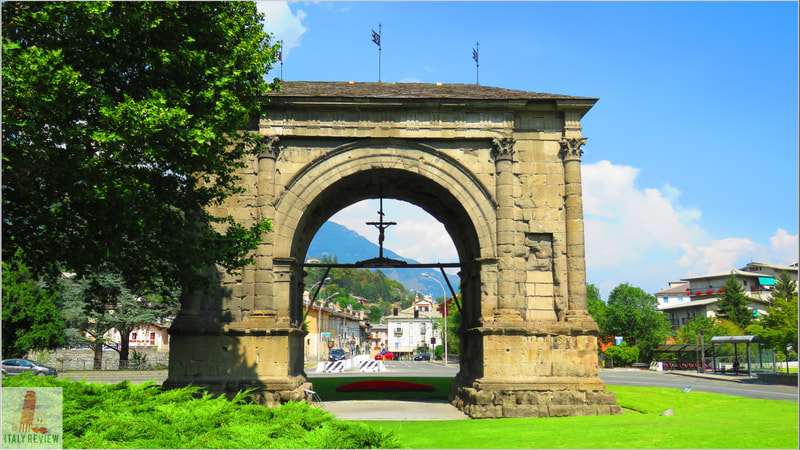 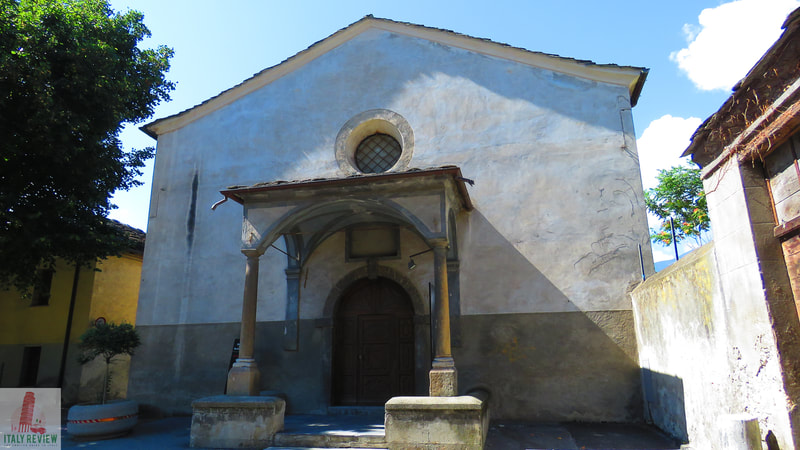 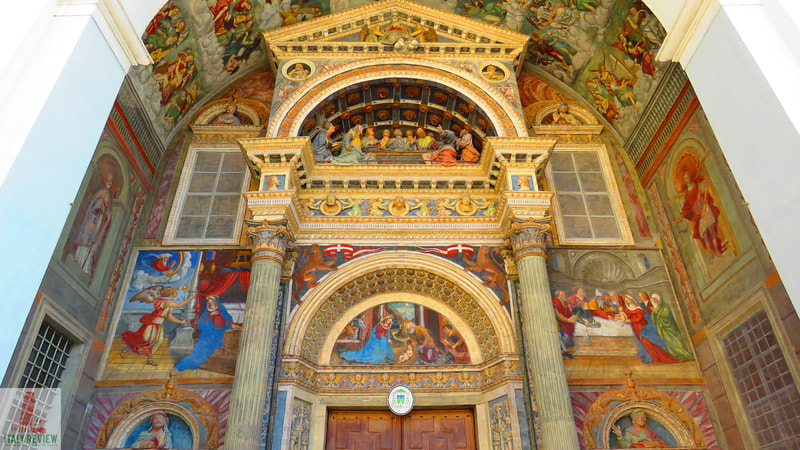 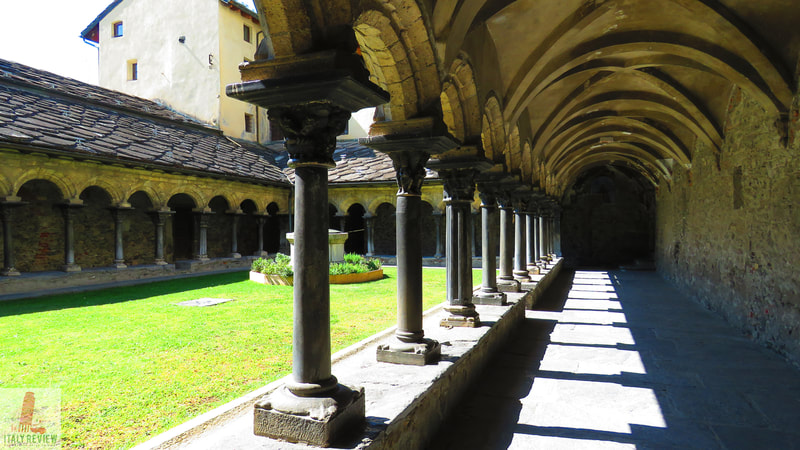 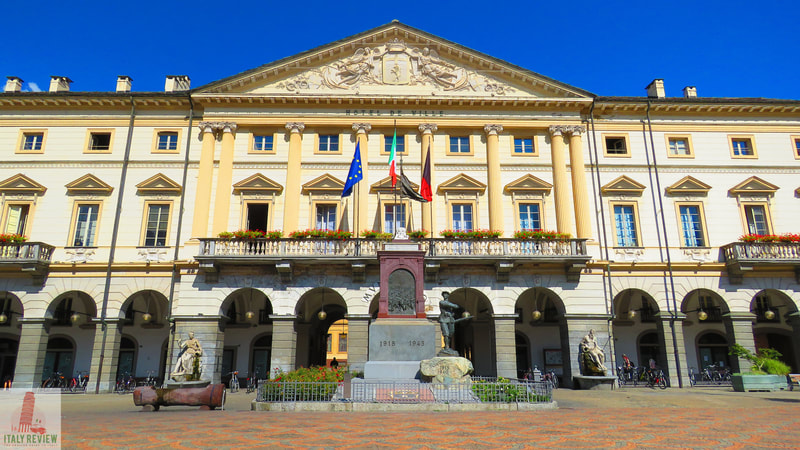 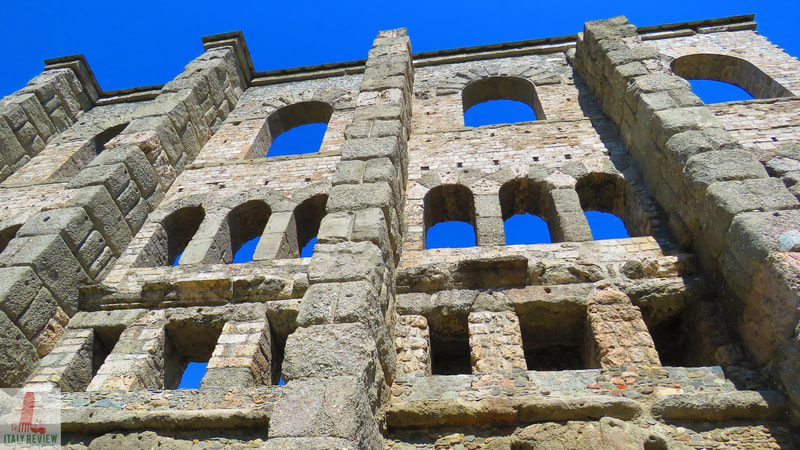 Roman Theatre, Aosta
The entry ticket to the Roman Theatre also provides access to a number of other sites in the city centre, including the Cryptoporticus Roman tunnel and the Archaeological Museum. Among the sites included in the entry ticket are the Chiesa di San Lorenzo, an early Christian church and underground archaeological area.

This marks one of the main areas of sightseeing in Aosta; directly outside the deconsecrated Basilica di San Lorenzo is the Collegiata di Sant'Orso with its unusual facade, while next to the church are the beautiful cloisters (Chiostro Romanico di Sant'Orso) that require a separate entry ticket. This little cluster of sights is completed by the tall bell tower between the two church facades and the Tiglio di Aosta: a 500 year old linden tree.

Continuing west from the Roman Theatre and the Porta Praetoria you soon reach the main square of Aosta: Piazza Émile Chanoux. The beautiful Piazza is home to the town hall building, a grandiose structure which occupies the whole of the northern side of the square. The rest of the Piazza is populated by shops, bars and restaurants with the shopping area extending for roughly half a kilometre to either side.

​A short walk west and then north of Piazza Émile Chanoux brings you to the Aosta Regional Archaeological Museum which traces the city's history, while the area around it provides access to two further sites: the Cryptoporticus Roman tunnel and Aosta Cathedral with its intricate doorway decoration and pretty vaulted ceiling. A much longer walk of about 25 minutes is required to reach the Area Megalitica Saint Martin Corleans, another archaeological museum that exhibits prehistoric and protohistoric artefacts from the region. 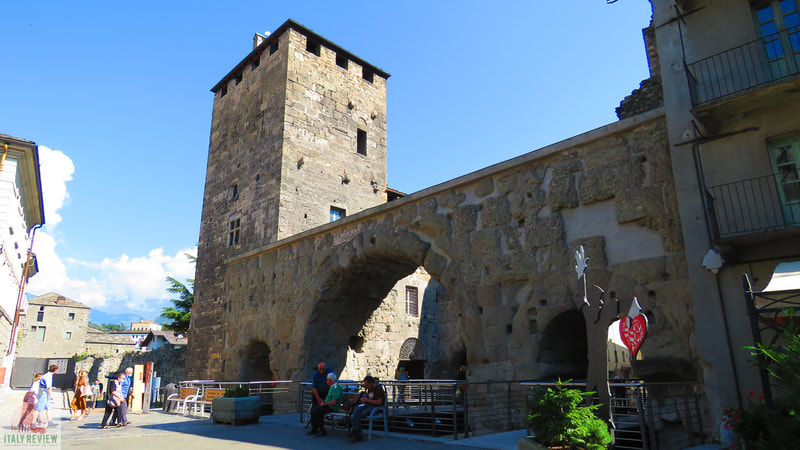 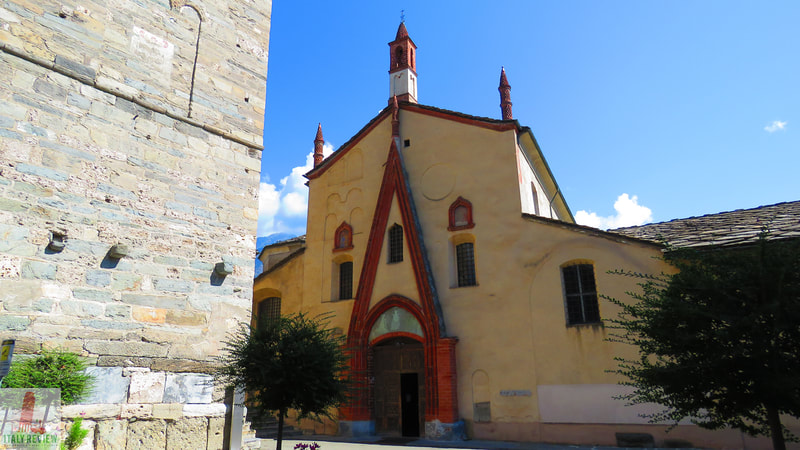 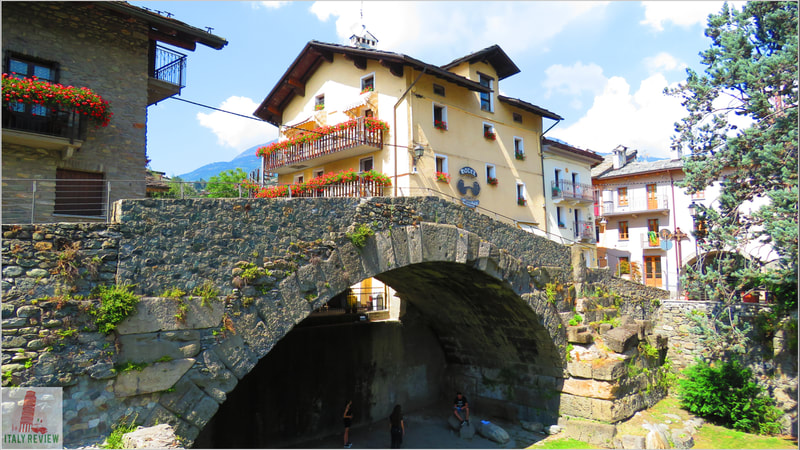 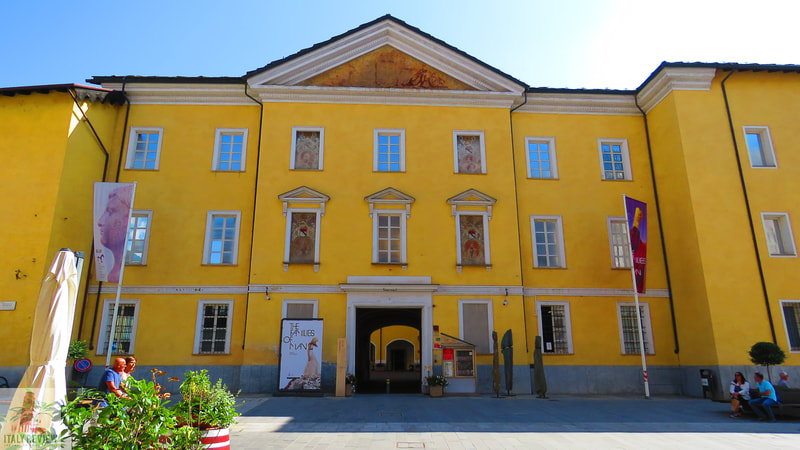 
The most popular ingredients in the local cuisine (cucina Valdostana) are Fontina cheese which is used for fondue, and polenta which is a type of savoury porridge, often used in place of potatoes or pasta. Typical dishes including polenta are Polenta Concia and Carbonade Valdostana. Soups are also popular but thicker and more of a stew in some cases; local dishes of this type include ​Seupa à la Vapelenentse which is made with cabbage, bread and cheese. Tegole are a kind of thin, sweet biscuit flavoured with nuts or honey.
Comune di Aosta
Aosta is the capital city of Valle d'Aosta, the smallest region in Italy. It's also an official comune (municipality) covering an area of 21 square kilometres and standing at an elevation of 583 metres above sea level. Within the Comune of Aosta there are a further 37 frazioni, which are smaller villages or hamlets. According to ISTAT, the population of Aosta in 2021 was 33,409 inhabitants.

The city's sightseeing includes a collection of monuments from the period of its foundation by the Romans. The most famous monuments are the Roman Theatre, the Arch of Augustus and the Porta Praetoria city gate. The top-rated restaurant in Aosta is called Stefenelli Desk which is included in the Michelin guide, and the recommended accommodation is the HB Aosta Hotel & Balcony SPA.

The most famous annual event in Aosta is the Fiera di Sant'Orso which takes place on the 30th and 31st January. Across the two days of the event, the city centre sees a throng of people shopping in the craft market whilst enjoying local cuisine from temporary stalls.

The landscape around Aosta is dominated by the mountains that overlook the central valley from both sides. Running through the main valley are both a motorway and a main road which is free, but not quite as fast as the autostrada. By sticking to either of these very easy roads you can reach a number of historic towns and villages in both directions.

​Among the best of those are Fénis with its fabulous castle, one of dozens of fortresses that are seemingly ubiquitous in Valle d'Aosta. Avise doesn't have a castle but it's a gorgeous medieval village and the same can be said of Morgex to a degree, although it's not quite as pretty but does have better facilities such as places to eat and drink. Aosta itself is by far the largest city in the region but one of the larger towns in Valle d'Aosta is Saint-Vincent which has an historic town centre and a good selection of shops.

Of course one of the main reasons to come to Valle d'Aosta is for winter sports and two of Italy's best ski resorts are within striking distance of the capital. Half an hour to the east is Courmayeur which lies in the shadow of Mont Blanc, while a drive of an hour or so is required to reach Breuil-Cervinia where the Matterhorn oversees daily life. Breuil Cervinia requires a steady climb north-west of Aosta while heading directly south of the city for around 40 minutes you eventually reach the Gran Paradiso National Park. 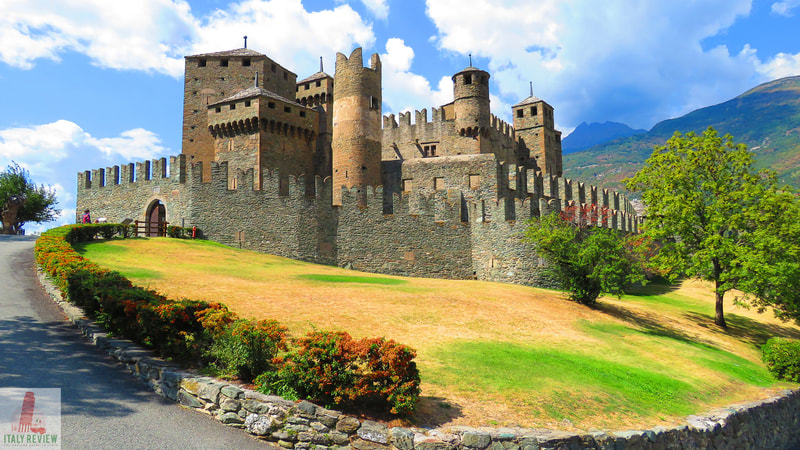 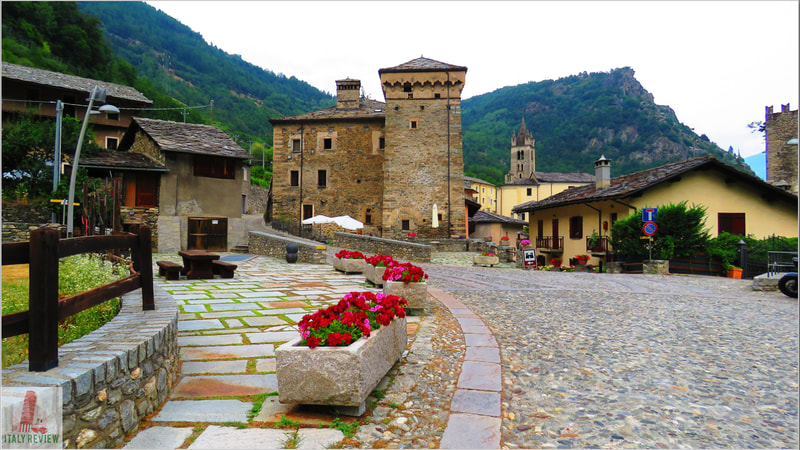 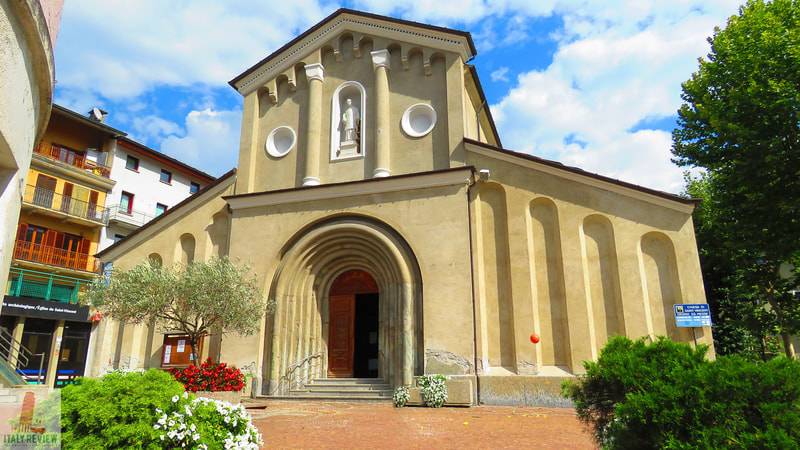 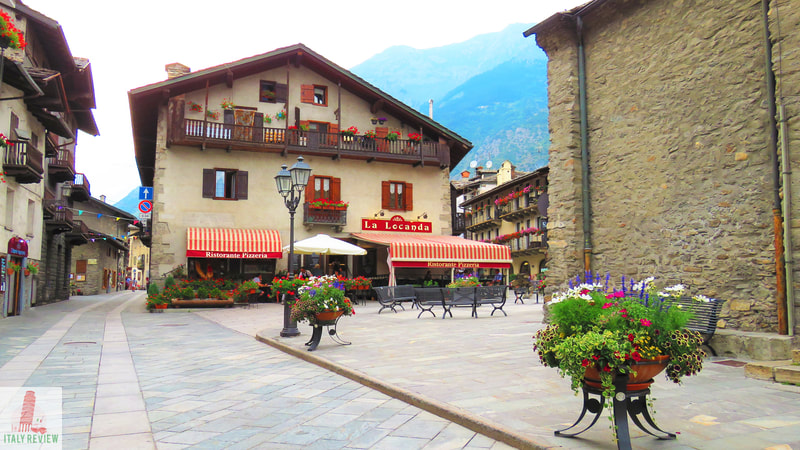 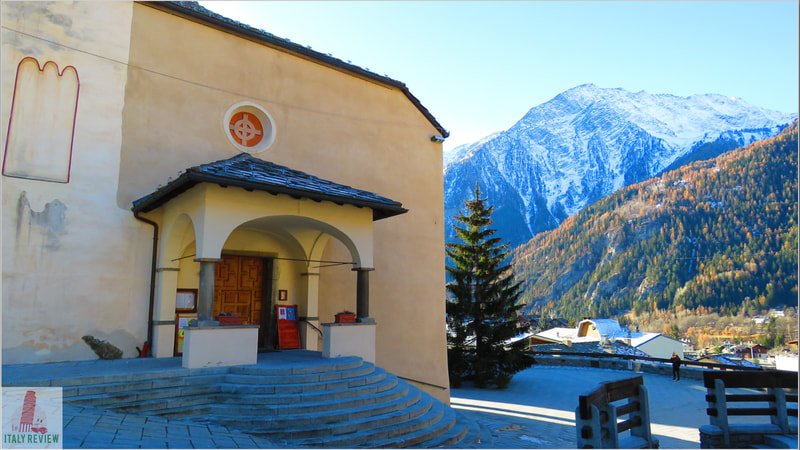 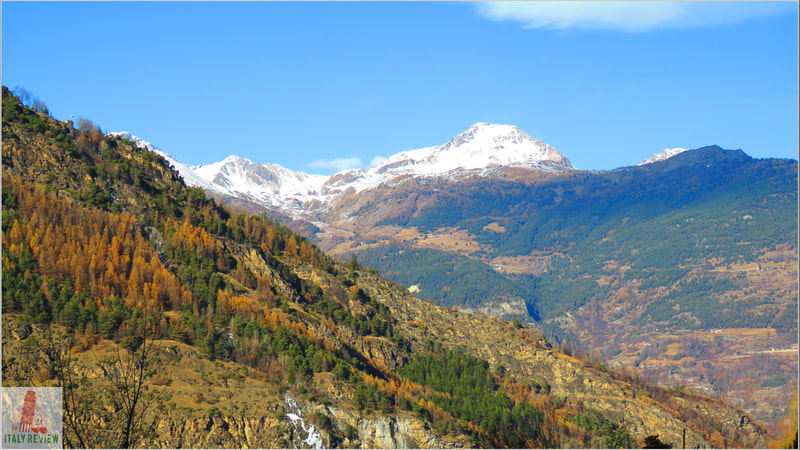 Aosta's train station is situated a five minute walk south of Piazza Émile Chanoux. The regional trains run between the terminus of Aosta and south east to Turin with a journey time of just under two hours in each direction. Along the way there are stops in Chatillon (20 minutes) and Ivrea (1 hour). To reach Milan and the other major Italian cities, it's necessary to change first at either Chivasso or Turin.

Aosta does have its own airport but it's used more for private aviation than commercial traffic. The most convenient airport to use for trips to Aosta is Turin Airport which is 117 kilometres away and reachable in an hour and a quarter by car.

The majority of vehicle traffic in Valle d'Aosta travels along the two main roads that run almost parallel to each other, east to west from the French border to Piedmont. More so perhaps than in any other part of Italy, there's a significant financial implication to taking the motorway. For example, from Courmayeur to Bard costs €18.20 just for the tolls, for a distance of around eighty kilometres. This is a much higher rate per kilometre than in the rest of Italy but the situation changes when you reach Piedmont.

The counterpoint to that is the time saved: the journey described above on the motorway takes around an hour and ten minutes while on the slower Strada Statale 26 (SS26) it takes an extra 35 minutes. If you want to go the scenic route, the traffic moves more slowly and at a lower speed limit. If you have time available it's worth considering the option though as the money saved can go towards a good lunch!

​The cost of driving through the Mont Blanc Tunnel which marks the international border between Italy and France, is something else that needs to be factored in to the costs. The eleven kilometre tunnel takes 17 minute to drive through but costs €47.40 for a single ticket or €59.20 for the return. This again should be weighed against the alternative options which include having to spend €37 for a vignette to drive through Switzerland or the associated costs involved by taking alternative routes out of Italy.