Related links
How to identify a Renaissance building

The above question gets asked perhaps more about Italian Renaissance architecture than it does for the other major architectural styles in Italy such as the Romanesque and Gothic periods that preceded it. This is because in many ways, the architectural features of the Renaissance are more subtle than say the pointed arches which signified the Gothic style after the semi-circular Romanesque versions.

Online research of "Renaissance Architecture Characteristics" will in some cases provide some quite vague answers such as "geometrical symmetry", a "sense of proportion", or "visual harmony", for example. Those answers may be more effective for people within architectural circles but perhaps a little more difficult to pinpoint for "laymen" of the subject. The good news however, is that there are some strong clues as to what makes a Renaissance building and they become easier to identify with time.

Before looking at those determining characteristics, it's worth pointing out that by the time the Renaissance arrived around the beginning of the 15th century, there was already a huge architectural body of work in Italy left over from the Gothic, Romanesque, and to a lesser extent, the Early Christian period. The point here being, that churches in particular may have originally been built in a Romanesque or Gothic style but subsequently been damaged or destroyed in the intervening years, before being remodelled upon Renaissance principles. 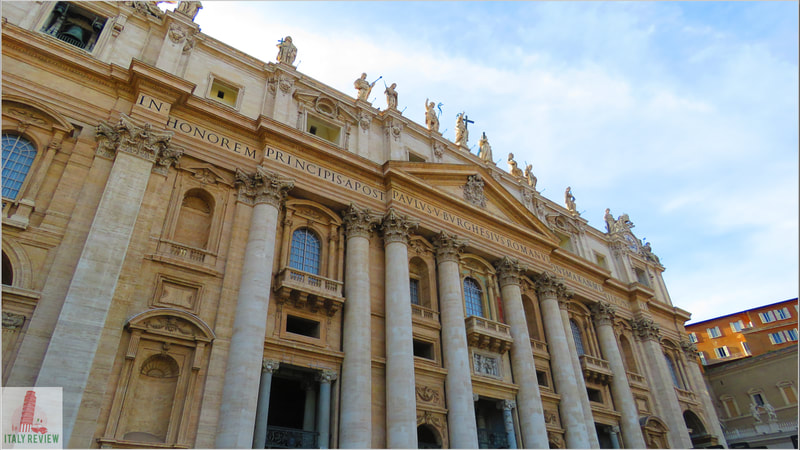 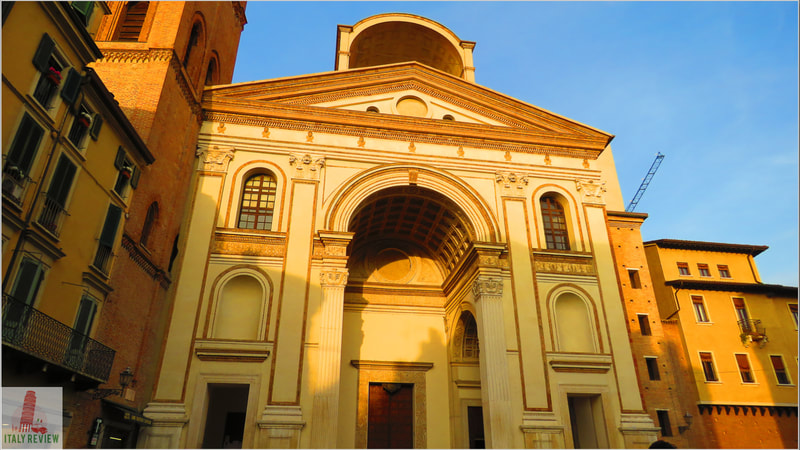 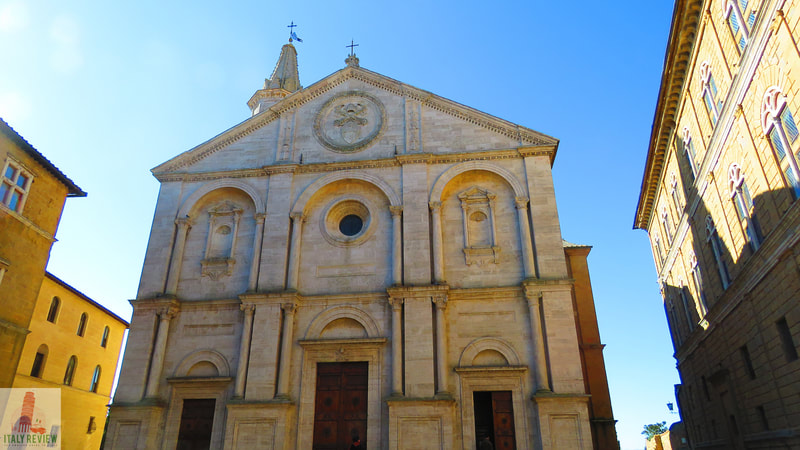 Pienza Cathedral, Tuscany
Above are four of the most famous Italian Renaissance facades: Saint Peter's Basilica in Rome, San Giorgio Maggiore in Venice, the Basilica di Sant'Andrea in Mantua and Pienza Cathedral in Tuscany. The four facades have some notable differences but they also share a number of characteristics that represent the Renaissance.

A key element of the Renaissance ideals was to restore the philosophical ideals of the Romans and the Greeks that came before them. This movement also extended to the architectural techniques that had somehow become lost to mankind after the fall of the western Roman Empire ushered in the medieval age, sometimes known as the Dark Ages, when knowledge became almost dangerous in the light of religious dogma.

Triangular pediments above or supported by columns

This return to Greek and Roman architectural ideals can be seen clearly in all four of the facades above, but perhaps most obviously in the first two. A quick glance at any Greek or Roman temple will show you a triangular pediment supported by columns, and while in the ancient architecture there may have been empty spaces between the columns, in the cases above we can see how they have been incorporated into Renaissance architecture.

A subtle difference between ancient architecture and that of the Renaissance, can be found with the facade columns. In each of the examples above, we find the use of the Colossal Order, sometimes known as the Giant Order, where the columns reach the height of two storeys. In Classical Greek or Roman architecture, those facade columns were usually no higher than a single storey.

​A point of differentiation between the facades in the images above is the different type of column used: in the bottom two photos we see flat, rectangular columns or pilasters, while the top two photos predominantly show circular, Corinthian columns. However, upon closer inspection of those top two images we also find the flat pilasters used in conjunction with the circular columns, away from the central area. This is easier to pick out on the Pienza Cathedral image and easier to perceive with a more zoomed-out image of Saint Peter's Basilica.

​The Renaissance facades are also more playful than their comparatively rigid ancient equivalents; in the case of San Giorgio Maggiore for example, we see the triangular pediment feature reworked, used twice and with one larger than the other. ​

Travertine, white marble and other materials used in facades

Two of the facades in the images above: Saint Peter's Basilica and Pienza Cathedral show the the use of travertine which is commonplace in Renaissance churches. San Giorgio Maggiore is resplendent in white marble while the Basilica di Sant'Andrea's facade is made of brick and covered in plaster.
The Renaissance Palazzo

A point of differentiation between Italian Renaissance architecture and its Gothic or Romanesque predecessors is that there were a much greater number of secular buildings, not just churches, abbeys and cathedrals. One of the most important innovations of the ear was the Renaissance palazzo which was built upon a number of integral characteristics.

It's no coincidence that three examples above come from the cities of Florence and Rome: Florence was the birthplace of the Renaissance but it's often overlooked that Rome later became the venue where the movement took on an even greater significance. ​ 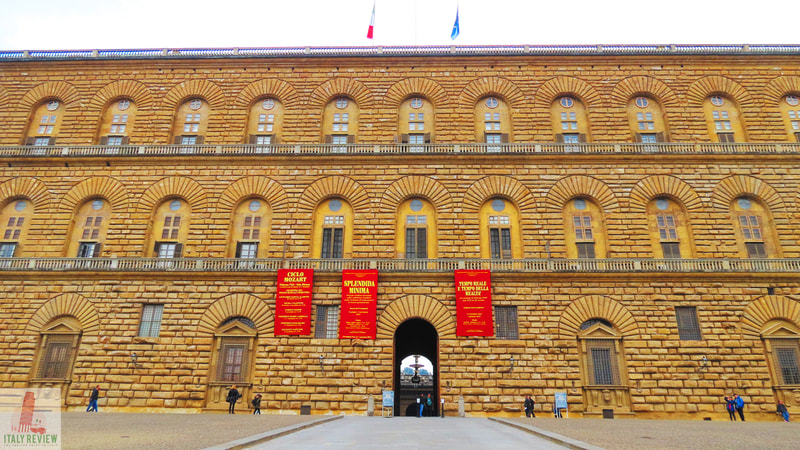 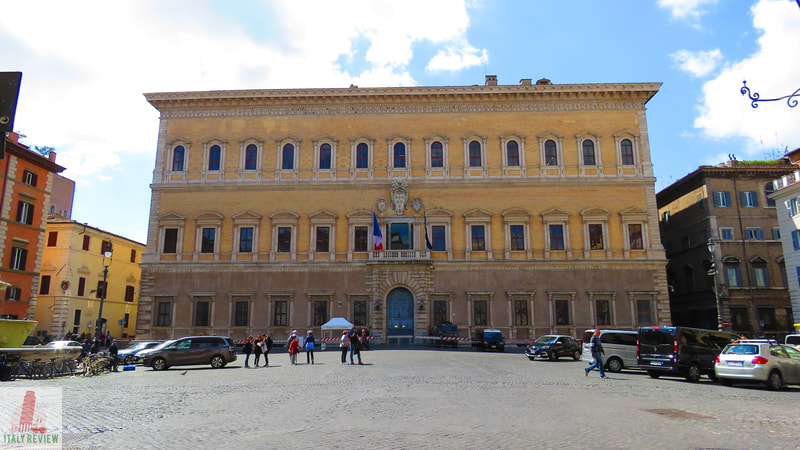 Palazzo Farnese, Rome
​Key Features of a Renaissance Palazzo
​
With the facades of these three buildings we can see the essence of the typical Renaissance palazzo. Each of the above buildings is constructed of three floors, with subtle differences to the external characteristics of each storey.
Index of famous Italian Renaissance buildings followed by mixed categories where the Renaissance features in conjunction with other styles.
​Renaissance