Sabbioneta: Little Athens of the Renaissance

The aim of the project was to create the "ideal city", something we've seen in other Italian towns and cities such as Pienza in Tuscany or the larger Ferrara in Emilia Romagna. Sabbioneta is a walled town of neatly-aligned streets and exquisite Renaissance architecture that requires a minimum of half a day to see the most important sights.
Related links
Geography

Sabbioneta is situated on an alluvial plain in the region of Lombardy between the River Po six kilometres to its south and marking the regional border with Emilia Romagna, and the River Oglio around ten kilometres to its north. It's surrounded by some of northern Italy's most famous cities including Parma to the south, Cremona to the west and Mantua to the north east.
Brief history

It was the Gonzaga family that ruled nearby Mantua in the sixteenth century that created Sabbioneta into the town we see today. In particular, it was Vespasian Gonzaga who had the vision of turning it into an ideal city and he employed some of the finest architects of the Renaissance to help him achieve his aim. Before the Gonzagas came along, Sabbioneta (which roughly translates as "sandy") was little more than a hamlet that quickly developed into a dukedom, with Vespasian I Gonzaga its first duke.
Sightseeing

​Despite being fairly small in its dimensions, Sabbioneta manages to pack in a good number of sights. There are two main squares in the town, which is surrounded by a defensive wall system. Depending on the direction you come from, it's possible that you'll first arrive in the largest square: Piazza d'Armi. If arriving by car, this is the best place to park as the rest of the town is a ZTL (Zona Traffico Limitato) which essentially means you'll be fined if you drive in it without a permit.

Piazza d'Armi's main sights include the Palazzo del Giardino, a 16th century palace (completed in 1588) which is situated in the south east corner of the square. It contains numerous rooms and apartments with Renaissance art and furniture, while its name comes from the large garden that occupies the space to the south of the town's wall.  The right hand side of the square (as you enter) is occupied by the Galleria degli Antichi, the ground level of which is a 97 metre long arcaded walkway, while the upper, internal level is decorated with frescoes.

Sabbioneta's most famous sights are to be found as you enter the neatly laid-out streets of the main town, just a couple of minutes' walk from Piazza d'Armi. The smaller, but prettier Piazza Ducale is the home of the Ducal Palace or Palazzo Ducale, which, like most of the main buildings in the town, was built by the ruling Gonzaga family in the sixteenth century (finished in 1561). The Palazzo Ducale is spread across four floors with palatial rooms, exhibition areas and art galleries to explore. 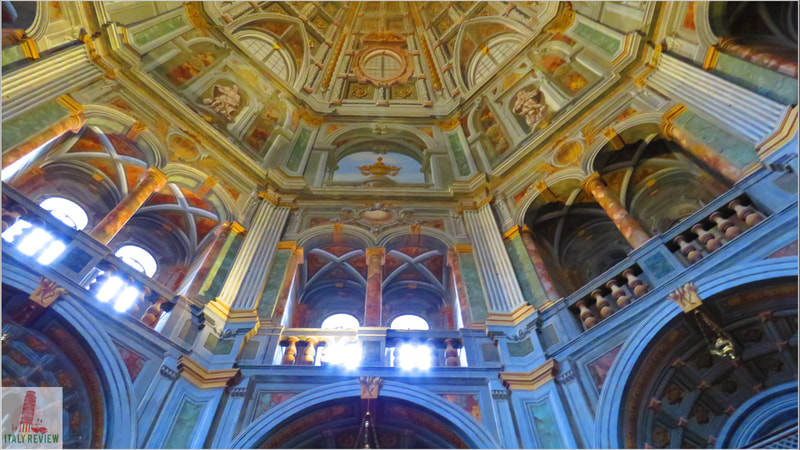 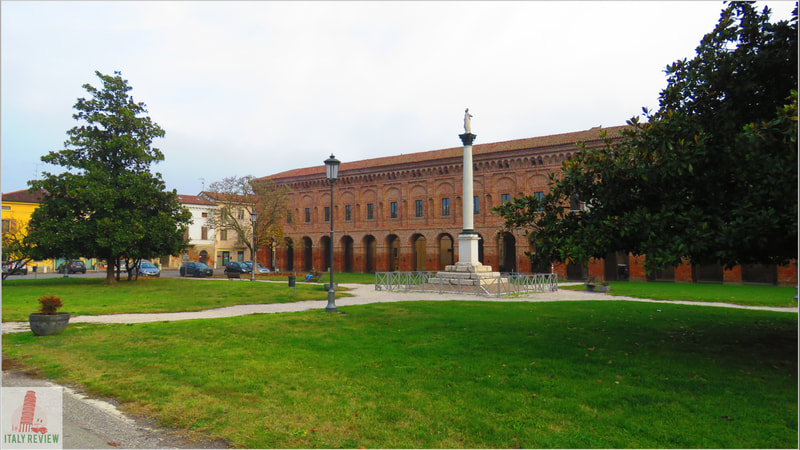 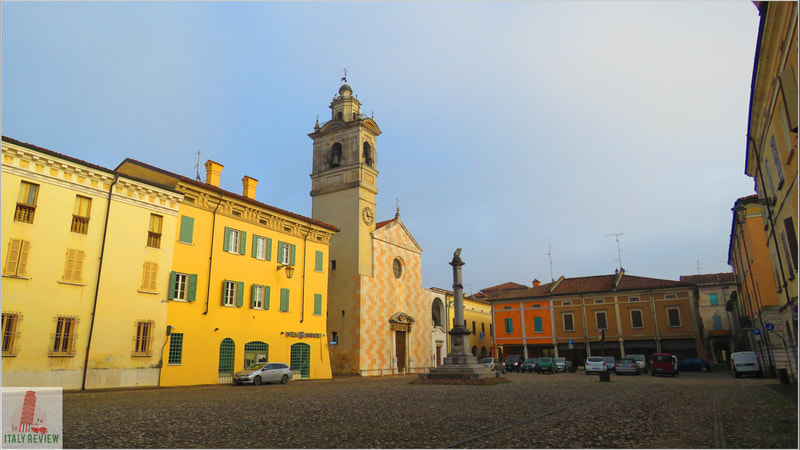 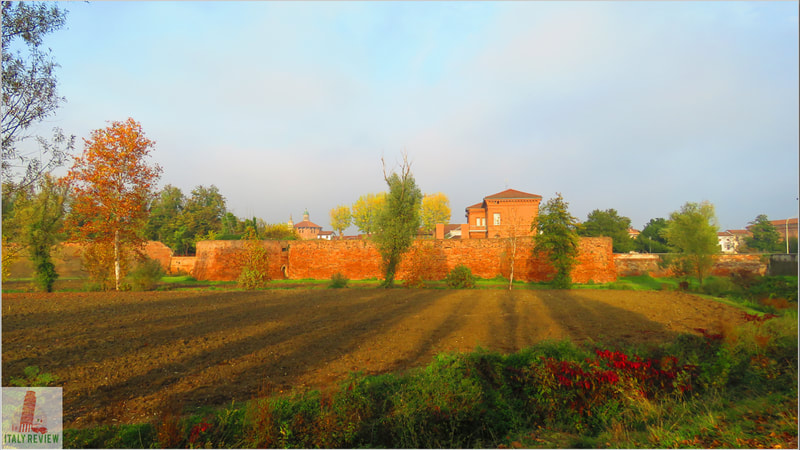 ​Perhaps the most unique sight in Sabbioneta is the Teatro all'Antica, which is also known as the Teatro Olimpico. It occupies a slightly hidden position with its entrance at the end of Via Teatro just to the left of the Palazzo Ducale. It was commissioned by Vespasiano Gonzaga who was responsible for the majority of the town's architectural projects, who brought in the architect Vincenzo Scamozzi to design it in 1587. Scamozzi was a student of legendary Renaissance architect Andrea Palladio whose famous works include his own Teatro Olimpico in the town of Vicenza in the Veneto region. The Teatro all'Antica in Sabbioneta was finished in 1590 and is a spectacular sight.

Sabbioneta is blessed with a number of beautiful religious buildings, the highlight of which is the Chiesa della Beata Vergine Incoronata: a sixteenth century octagonal church and mausoleum of Vespasian Gonzaga, lavishly decorated inside. Also keep an eye out for the Chiesa di Santa Maria Assunta in Cielo with its unusual, colourful brickwork facade, the Oratory of San Rocco and the Chiesa di Sant'Antonio Abate in Villa Pasquali. It's also possible to visit Sabbioneta's Synagogue on Via Bernardino Campi, just off Piazza Ducale.

Most of the monuments above require a ticket to enter with the individual prices set out below. However, it makes much more sense to pay the €15 for a single ticket that allows entrance to all of the main sights.

​In his book The Shakespeare Guide to Italy (2011), American author Richard Paul Roe credits Sabbioneta as the setting of the Bard's "A Midsummer Night's Dream". When the Gonzagas created Sabbioneta it was dubbed the "Little Athens", not intended to signify the grandeur of its monuments, but more of an ethos towards hospitality and community. ​

​Roe goes on to explain in his book how he suddenly gasped in amazement upon realising the play had actually been set in Sabbioneta "The Little Athens", rather than the hitherto held belief that it had been written with the real Athens as the backdrop.

​Fans of the 2018 TV series Medici: The Magnificent will probably recognise various locations in Sabbioneta, such as the Porta Imperiale city gate and the Teatro all'Antica which were used in various scenes to represent Renaissance Florence.
Comune di Sabbioneta
Sabbioneta is an official municipality (comune in Italian) with a population of just over four thousand inhabitants.  It's situated in the Po Valley in the region of Lombardy and the province of Mantua, with an elevation of 18 metres above sea level. The Comune of Sabbioneta has five smaller villages (frazioni) under it and covers a total area of 37 km².

Recognised by UNESCO as a World Heritage Site along with the nearby city of Mantua since 2008, Sabbioneta is a small town with a defensive wall system and numerous sights. The most important sights are the Teatro all'Antica (also called the Teatro Olimpico), the Palazzo Ducale and the Palazzo del Giardino. The local dishes include Tortelli di Zucca which is a type of pasta filled with pumpkin, and the Risotto alla Mantovana, also known as Riso alla Pilota, which is a dish of rice, salami and other ingredients.

The top-rated restaurant in Sabbioneta is the Ristorante Corte Bondeno and the recommended accommodation is the Albergo Giulia Gonzaga. Apart from its UNESCO award, Sabbioneta is also recognised by Touring Club Italiano with their Orange Flag (Bandiera Arancione) and by the Borghi Più Belli d'Italia as one of Italy's most beautiful villages/towns.
UNESCO World Heritage Site

​The area around Sabbioneta is really quite wonderful. It's at the centre of a part of northern Italy which is characterised by major historical cities. Within an hour's drive of Sabbioneta you can reach five provincial capitals as well as numerous smaller towns which all merit a visit.

This is one of the best places from which to explore the northern Italian regions of Lombardy and Emilia Romagna. In terms of the larger cities, it's just over half an hour north west by car to the Renaissance city of Mantua with its Palazzo Ducale, Castello di San Giorgio and numerous other monuments and piazzas, all with the backdrop of the River Mincio.

In the opposite direction from Sabbioneta and a similar distance lies Parma with its beautiful Cathedral, Baptistery and expansive Parco Ducale, while a slightly longer drive to the west brings you to Cremona with its amazing Piazza del Comune and just as in the case of Parma, a free-standing Baptistery. Although its Cathedral and other monuments are fabulous, Cremona is most-closely associated with the violin and was the home of the famous Stradivarius. The two further provincial capitals within an hour's drive of Sabbioneta are Reggio Emilia to the south east and Piacenza to the west.

Closer to Sabbioneta there are numerous small towns and villages to visit: among the best of those are Colorno and Fontanellato, both in the province of Parma, while 50 kilometres south east of Sabbioneta is the city of Carpi with its enormous Piazza dei Martiri. 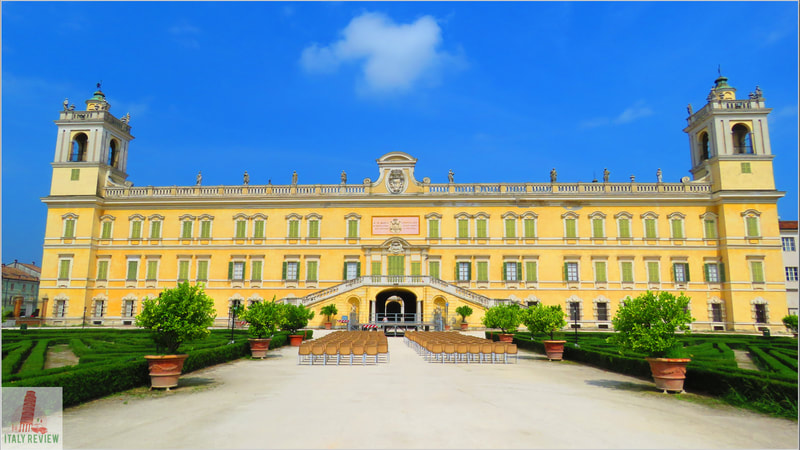 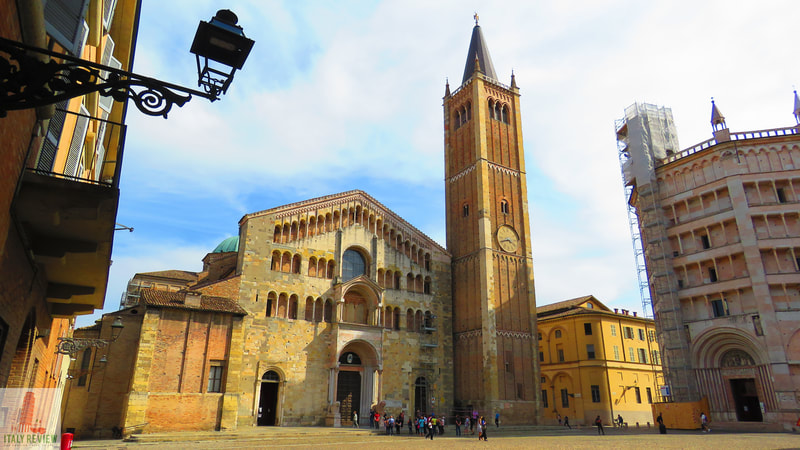 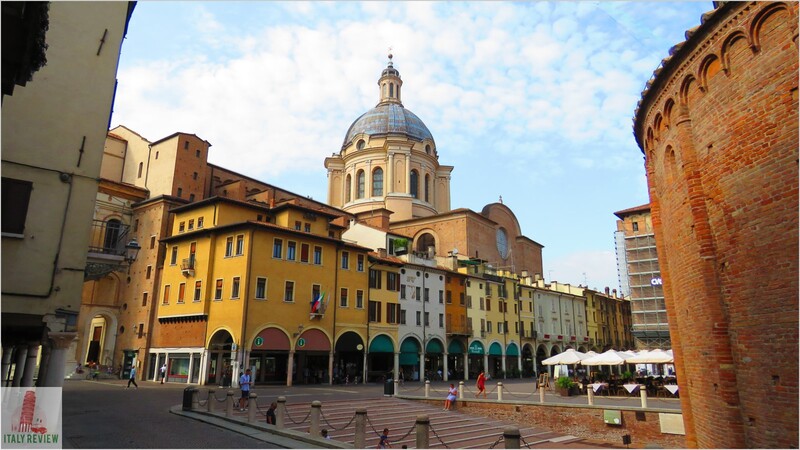 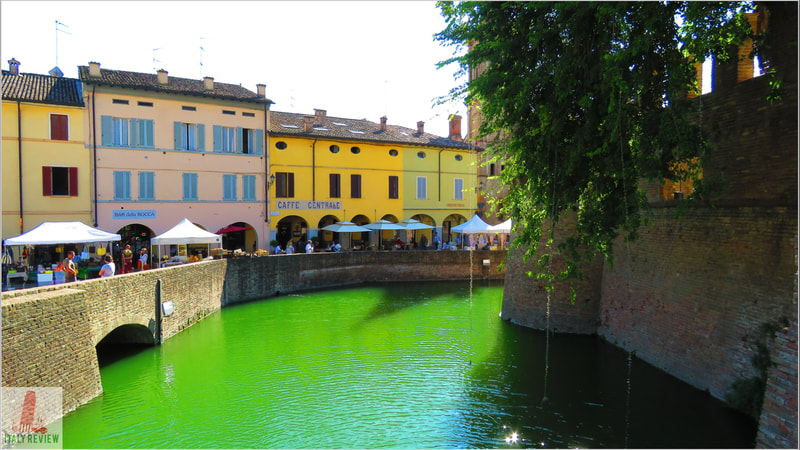 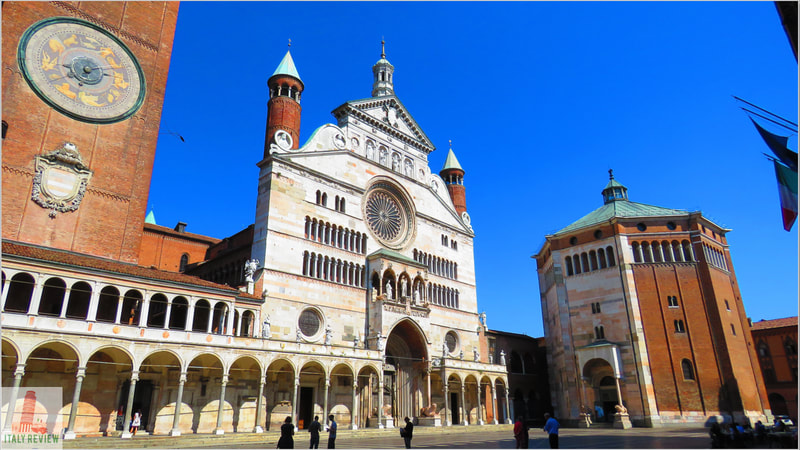 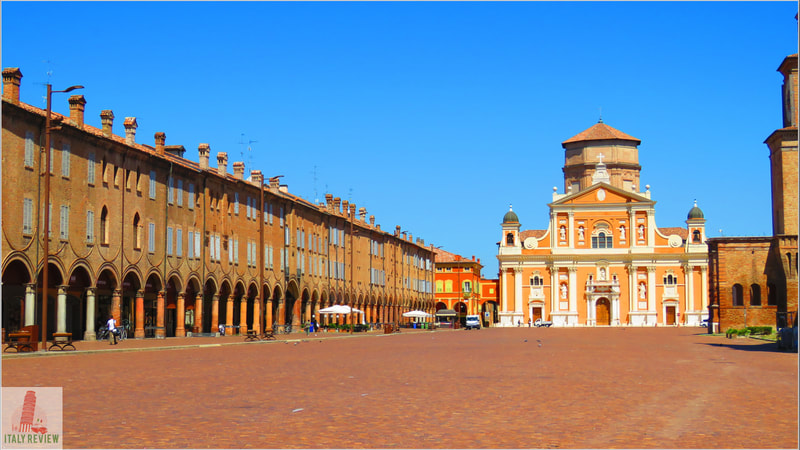 The closest train station to Sabbioneta is Casalmaggiore, six kilometres to the south west. Trains from Casalmaggiore run south to Parma (33 minutes) or north to Brescia (1 hour 28 minutes), while to reach the larger cities such as Milan, Florence or Venice requires a change. ​

​There's no shortage of airports to consider for a trip to Sabbioneta; the most convenient of those being Verona Airport which is just over an hour away by car. Parma Airport is closer but has a limited number of flight connections. Of the International airports, any of Bologna, Milan Bergamo or Milan Linate are reachable in around an hour and a half, while the likes of Venice Marco Polo or Milan Malpensa require around two hours to reach. The main airport in Italy: Rome Fiumicino is over 500 kilometres away and takes five and a half hours by car.

The roads around Sabbioneta are well maintained and easy to navigate with the Strada Provinciale 40 (SP 40) running immediately south of the town from east to west. From the SP 40 it's only a short distance to the motorway network provides access to the major cities.

Sabbioneta is a small town with everything you need to see within a short walk. The main car park is just before Piazza d'Armi or on the square itself; free of charge within the white lines.