Venice: The Incredible City on the Sea​

Related links
The Rise and Fall of Venice
​The story of Venice's rise and fall is one that can go toe to toe with that of Rome; in both cases, a tiny plot of land grew exponentially, dominating the world, before a gradual decline and fall from grace. Whereas the Roman Empire's growth came largely through military might, the Venetian golden age was based on trade, ingenuity and no small amount of guile.

​At the height of its power, Venice was the trade capital of the world, dominating the waves from its tiny lagoon to the new worlds in the east. The riches that poured into Venice during its medieval heyday have left a remarkable imprint on the city-scape that is unlike any other in the world. ​
The Venetian Lagoon and the six Sestieri districts
Venice is the central island in the Venice Lagoon, one of several hundred islets, and itself made up of dozens of oddly-shaped jigsaw puzzle pieces that are separated by a series of canals and held together by a network of bridges.

​There are six districts on the main island of Venice, known as sestieri, which roughly translates as "sixths". The most famous of the six sestieri is San Marco as this is the home to the major sights in the city including Saint Mark's Basilica (Basilica di San Marco), Saint Mark's Square (Piazza San Marco), the Doge's Palace (also known as the Palazzo Ducale) and Saint Mark's Bell Tower.
Where to start?
​The starting point for most itineraries of Venice is its most illustrious square: Piazza San Marco. The beautiful square is edged by elegant porticoed walkways concealing a series of cafes and restaurants, one of the best places for people-watching in the world.

There's very rarely a shortage of people to watch either, and those people mingle in semi-harmony with the thousands of pigeons who call the square home, eagerly eyeing titbits from passing tourists. At one end of the square lies the city's most important religious building: the Basilica di San Marco.

​This is one of the most beautiful cathedrals in the world, not only for its intricate facade but also for the treasures it holds within. For one of the best views of the piazza you can make your way to the roof of the Basilica and take it all in.

This isn't quite the best view in Venice however; that accolade belongs to the 98 metre high Saint Mark's Bell Tower. If you're just starting your first walk around Venice and you want to get your bearings, this is the ideal way to start. Take the lift to the top of the tower and you can enjoy the incredible views of the city, but also start to understand how the lagoon is mapped out and the role it has within daily life.
The main islands in the Lagoon
​From the dramatic vantage point at the top of the tower you can see the Grand Canal snaking its way around the centre of Venice, along with the smaller islands that lay in the distance. There are 118 islands in the lagoon and whilst you probably won't wish to visit them all, there are some that certainly merit some attention.

The best way to travel around Venice is via water buses which are called vaporetti. Before embarking on a vaporetto ride, it's a good idea to first familiarise yourself with the Venice Water Bus Vaporetto Map with its complex network of routes, numbers and colours. Once you've got to grips with that you can start to make your way around the lagoon effectively. One of the first stops should be the island of Murano; many of the lagoon's islands are synonymous with a certain trade and in the case of Murano that trade is glass. You can visit Murano's Glass Museum or even see the glass being made at the little factories around the island.

Another island that's famous for a certain trade is Burano (just one letter out from Murano), which is famed for its production of lace. It may well be the case however, that you come away from Burano not thinking about lace, but about the extraordinary collection of multi-coloured buildings that create a mesmerising effect. Burano can even boast its own leaning tower and is certainly not to be missed.

Torcello is a marked contrast to both Murano and Burano: it's much smaller and doesn't have the network of canals or rows of colourful buildings that those two islands have. Its main attraction is the beautiful 7th century Torcello Cathedral with its Byzantine mosaics. 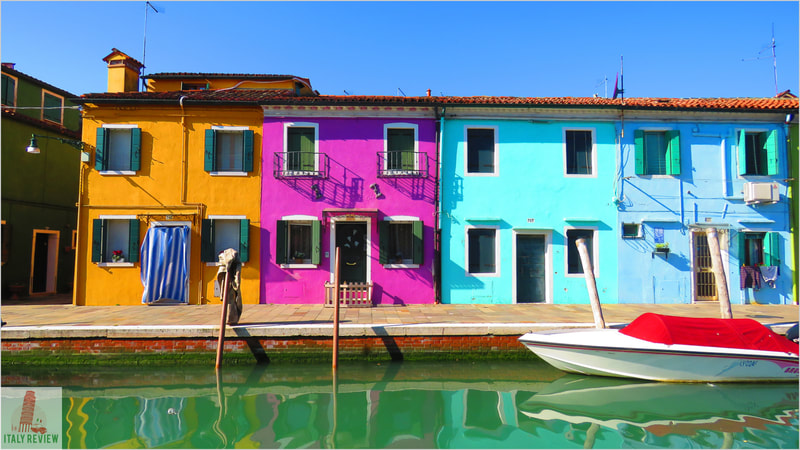 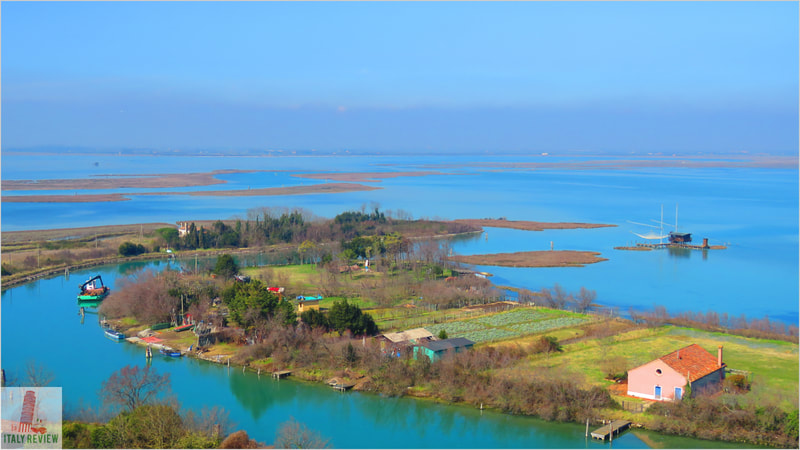 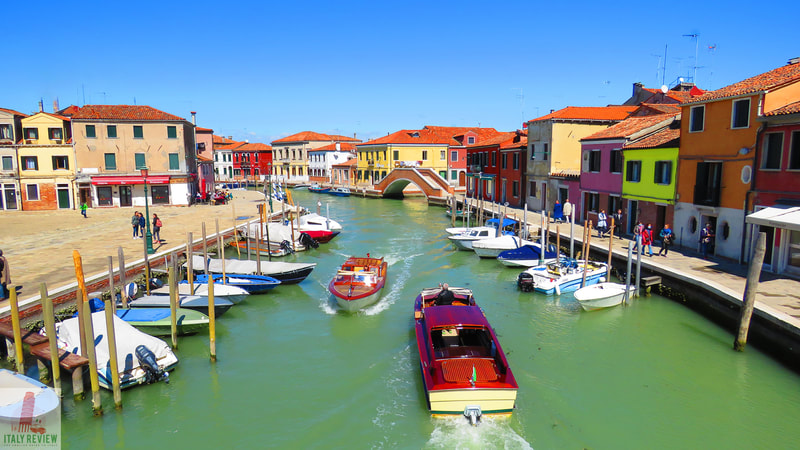 Murano
Venice's unmissable sights
Back on the main island of Venice, the Rialto Bridge is one of the most beautiful bridges in the world. It's one of the very symbols of Venice and stands astride the Grand Canal. If you're looking for the very essence of Venice, you can find it here as the busy waterway throngs with vaporetti vying for position with the tiny gondolas, manned by gondoliers in their typical hats and striped shirts.

Simply walking the streets of Venice is one of the most enjoyable ways of getting to know the city, but for a treat you can also take a romantic gondola ride around the canals whilst being serenaded by a gondolier. Away from the serenading gondoliers, you'll find a rather more polished performance on offer at the city's most famous theatre: Teatro La Fenice.

Depending on the time of year, you may wish to spend some of your time exploring Venice's museums and art galleries. They're busier during the summer and at a time when you might be more interested in enjoying the warm weather, but during those cold, atmospheric days of winter, you can enjoy the delights of the Gallerie dell'Accademia, the Scuola Grande di San Rocco or the Peggy Guggenheim Collection to give just three examples.

​Absolutely not to be missed, no matter the time of year, is the Doge's Palace; it was from here that the city's ruler (The Doge) made the important decisions that affected world trade, but also the location of another famous bridge. Il Ponte dei Sospiri translates to the familiar name of the Bridge of Sighs; so-called as the prisoners crossing its internal walkway would catch their last glimpse of the outside world here before reaching the palace dungeons. 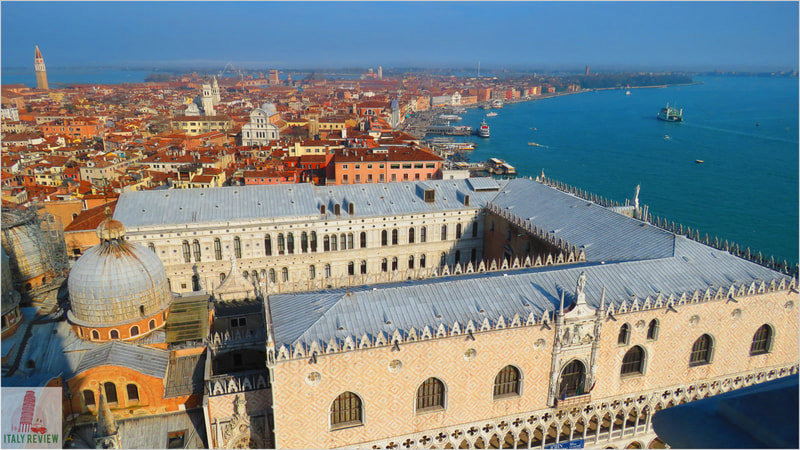 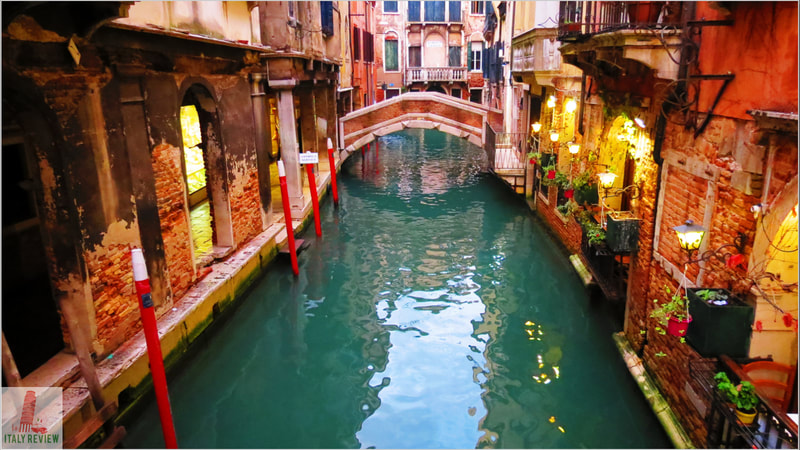 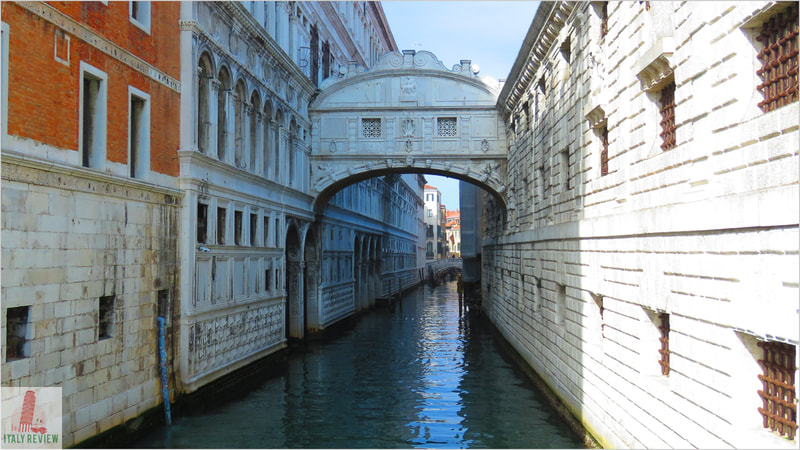 Bridge of Sighs, Venice
Comune di Venezia
Venice is the capital city of the Veneto region in north-east Italy. The Venetian Lagoon is a series of islands protected by a series of long, thin strips of land which separate it from the Adriatic Sea. In 2021 there were a total 256,083 residents living in the city of Venice while the population of the wider Metropolitan City of Venice province was 843,545.

The most famous sights in Venice are the Basilica di San Marco, the Piazza San Marco where it's located and the Rialto Bridge. The top rated accommodation for Venice is the Rosa Salva Hotel while local cuisine includes cicchetti which are a kind of tapas, risotto dishes, seafood, risi e bisi which is rice and peas, and the baicoli biscuits.
UNESCO World Heritage Site

Venice and its Lagoon

As one of the world's number one tourist destinations, travel to, from and around Venice is a sophisticated business. Most international travellers come via Venice Marco Polo Airport; located on the mainland around 12 kilometres away from the city centre. Venice is connected to the mainland by a long road and rail bridge across the lagoon. By rail you can access the heart of the city at the Santa Lucia Train Station from which you can connect to the other major cities in Italy.

​The road portion of the bridge allows cars to reach the edge of the city centre at a small island called Tronchetto, where there's a large car parking facility. One of the most important travel hubs is Piazzale Roma: a large square that you can reach by bus, and from where passengers arriving by bus or by private car, can make their way to the centre of Venice, either on foot or by taking one of the vaporetti.
Venice Ferry Schedules 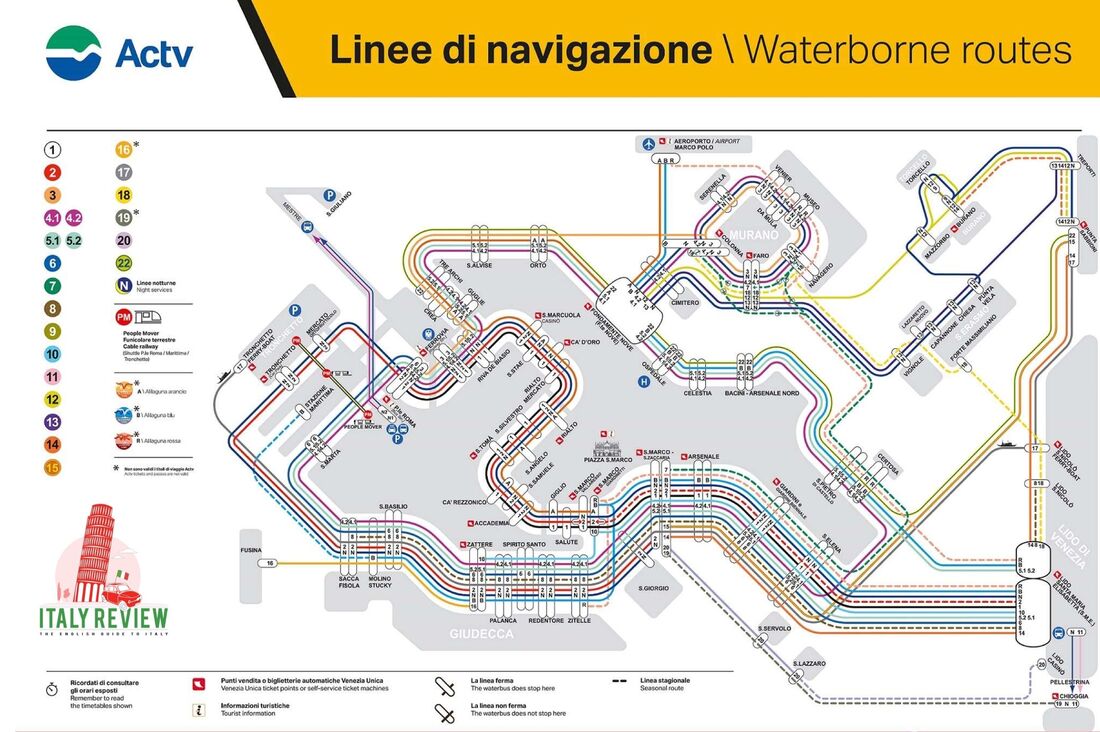 If you can tear yourself away from the considerable charms of Venice, there are further delights to be found once you venture into the surrounding area. Venice is the capital of the Veneto region which is rich in history, architecture and also beach resorts.

The Veneto area was the birthplace of Andrea Palladio, one of the most influential architects in history; most closely associated with his legacy of work in the city of Vicenza, a large number of his buildings can be found throughout the region. One of those is just on the doorstep of Venice: the beautiful Baroque palace of Villa Pisani with its elegant apartments and landscaped gardens which include a complicated maze.

​Just a bit further out from Venice is one of Veneto's major cities: Padua. Called Padova in Italian, the city is one of the most beautiful in Italy with some extraordinary sights. Among those is the Prato della Valle piazza, a huge elliptical open-space surrounded by a moat lined with statues. Padua is a UNESCO World Heritage Site twice over with its Botanical Garden and the Fresco Cycles of the Scrovegni Chapel by early Renaissance artist Giotto. The city centre of Padua is replete with further beautiful piazzas, landmarks churches including the Basilica di Sant'Antonio and the exquisite Padua Baptistery.

Veneto is one of the most affluent regions in Italy and much of its wealth comes from its enviable collection of cities. Just a short distance to the north of Venice we find another of those in Treviso. The area around Treviso is synonymous with the production of Prosecco while the city itself is display of medieval architecture coupled with waterside treats such as the famous Isola della Pescheria fish market.

​The three locations above can be reached either by road or rail while the next two on the list provide the opportunity to travel across the Lagoon. The most famous islands in the Lagoon are Burano, Murano and Torcello but venturing a little further takes you completely away from the sometimes maddening crowds of Venice itself. Pellestrina is a quirky strip of land that survives on fishing but has a charm all off is own with multi-coloured buildings and a somewhat ramshackle beach area.

A greater sense of refinement can be found just beyond Pellestrina at the town of Chioggia. Very much a "mini-Venice", it has its own system of canals, elegant architecture and a special place in history. The Battle of Chioggia was a defining battle between the two maritime powerhouses of Venice and Genoa in 1380, the result of which helped the Venetian Republic to its eventual supremacy in medieval trade.

There is so much history and beautiful architecture in and around Venice that it's sometimes easy to overlook the fact that it's a thriving beach resort destination. You need only hop across on a vaporetto to Lido to spend the day on the beach and there are numerous other resorts around the Lagoon including Lido di Jesolo. However, if you have a car, one of the most charming seaside towns in Italy is reachable in around an hour or so. Caorle is a colourful resort with a lovely beach and a famous Bell Tower among its attractions. 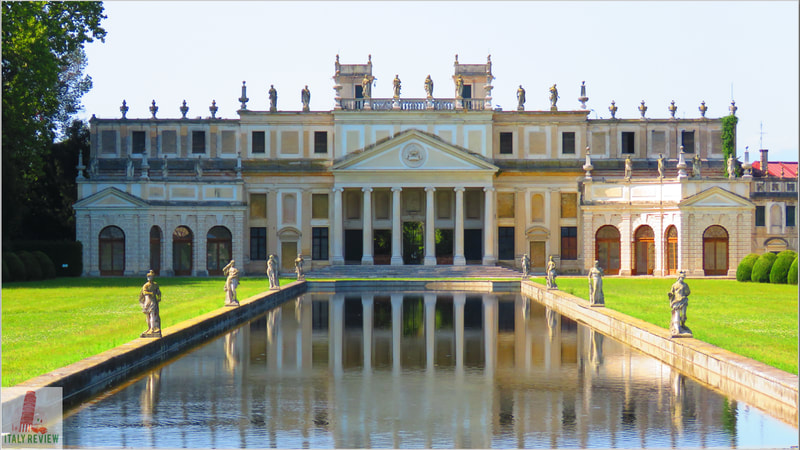 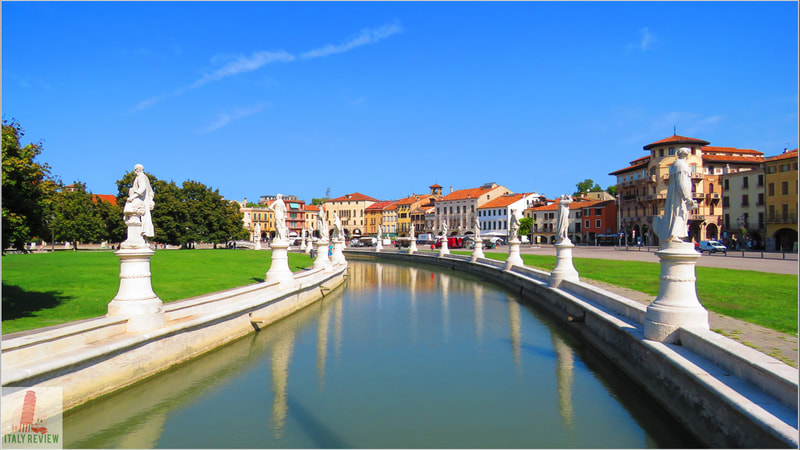 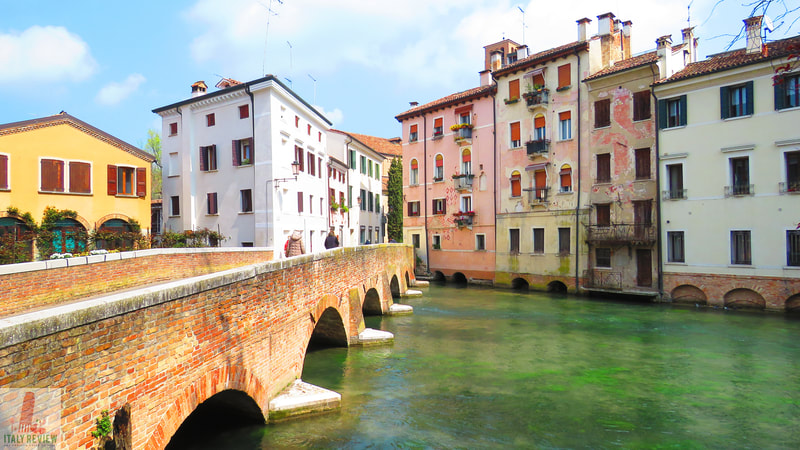 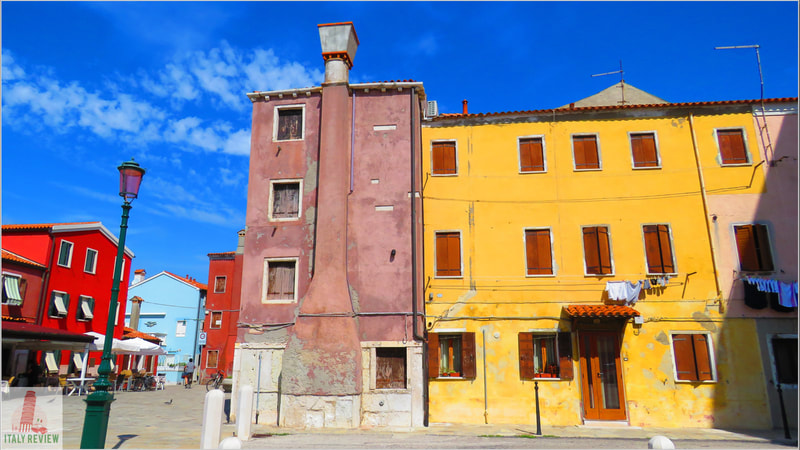 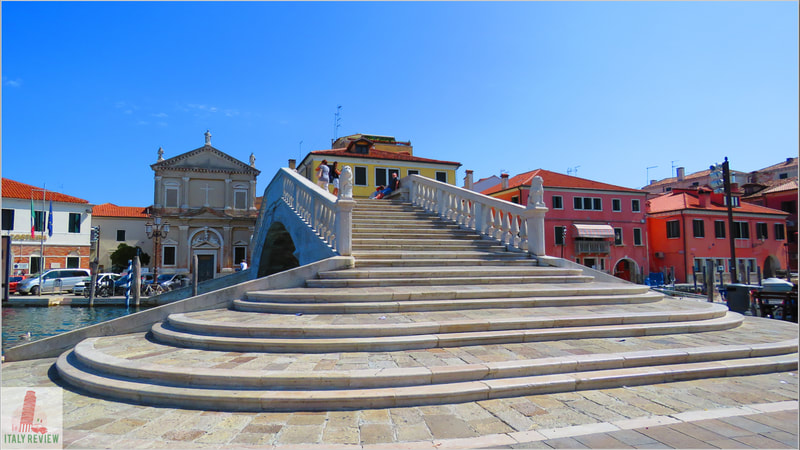 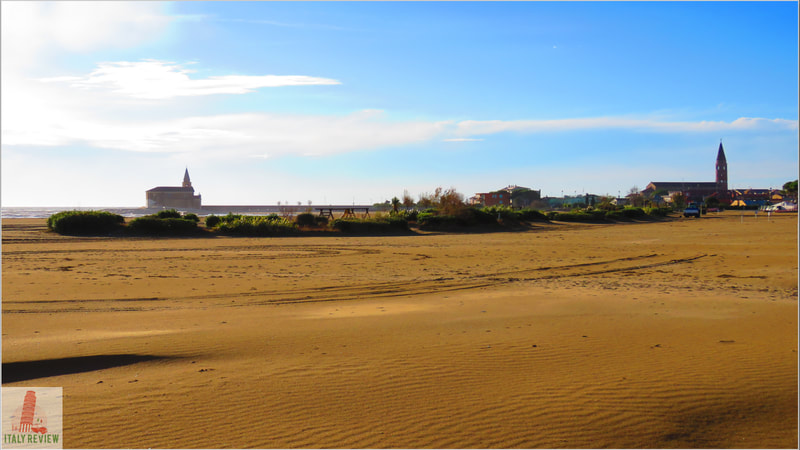 Italy Review works in partnership to provide the best and most up to date selection of Venice excursions. Aside from the small collection of tours and activities you can see below, there are dozens more to choose from once you click on one of the links or images.