Italy's Most Beautiful Stretch of Road

Optional step: provides views of Capri and passes through the villages of Massa Lubrense, Termini and Sant'Agata sui Due Golfi.
Massa Lubrense is situated four kilometres from the junction with Via Capo; it's a lovely, quiet town surrounded by vineyards that cascade down to the sea. The road signs in Massa Lubrense point out that the Amalfi Coast (Costiera Amalfitana) is 11 kilometres in one direction or 20 in the other, but we're taking the longer and more scenic route here which means turning right to join Via IV Novembre.

​Whereas some of the road towards Massa Lubrense might feel a little enclosed by walls on either side, the section immediately after it is one of the prettiest where you drive through the vineyards and enjoy the sea views to your right. From then on it's just a case of following the road as it winds through further vineyards before ascending a steep hill via a series of tight bends.

At this point, you start to pick up some incredible views across to the island of Capri, first to your right and then to your left as the winding road means you point in a different direction after each bend. Although it may be tempting to stop and take a photo by the roadside, it's best to wait until you reach the little village of Termini where there's a car park and a lovely viewing spot where you can stop to rest.

From Termini you make your way the short distance to Sant'Agata sui Due Golfi, so-named because from this point you can see the Gulf of Naples in one direction and the Gulf of Salerno (of which the Amalfi Coast is a part) in the other. Shortly after Sant'Agata you rejoin the SS145 that you left just after Sorrento, and make your way to the main Amalfi Coast Road after a long sequence of hairpin bends and passing through several small towns.

The terrain starts to change and at a certain point you catch the first glimpses of the famous cliffs that dominate one side of the Amalfi Coast Drive. If you're on a scooter, you can stop at a little viewing area and take some photos of the little group of islands called Lì Galli, also known as Le Sirenuse. As you make your way down to the main part of the Amalfi Coast Drive, you find the first roadside stop for cars which provides another opportunity to photograph the little islands.

These little roadside lay-bys are a regular feature along the drive as pretty much everyone wants to stop and take photos. Sometimes you'll arrive at one of the lay-bys and find there's nowhere to park so rather than risk leaving your car in a dangerous spot, it's best to just keep going until you find a free lay-by that somebody may have just driven out of. There are plenty of opportunities for photos along the way so there's really no need to take any chances. 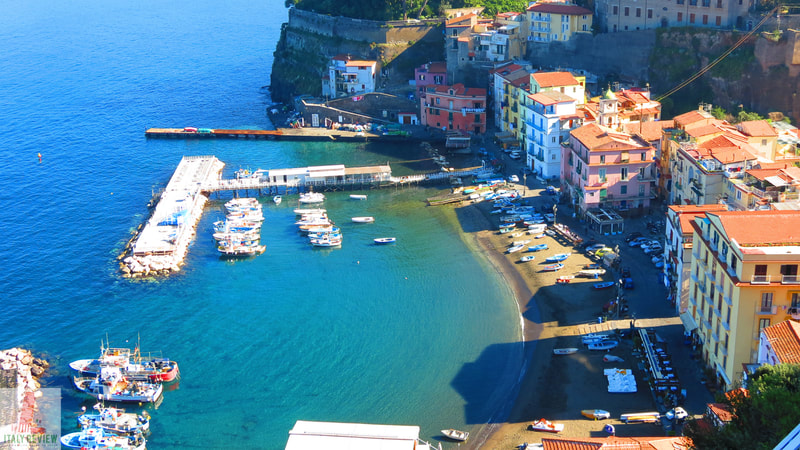 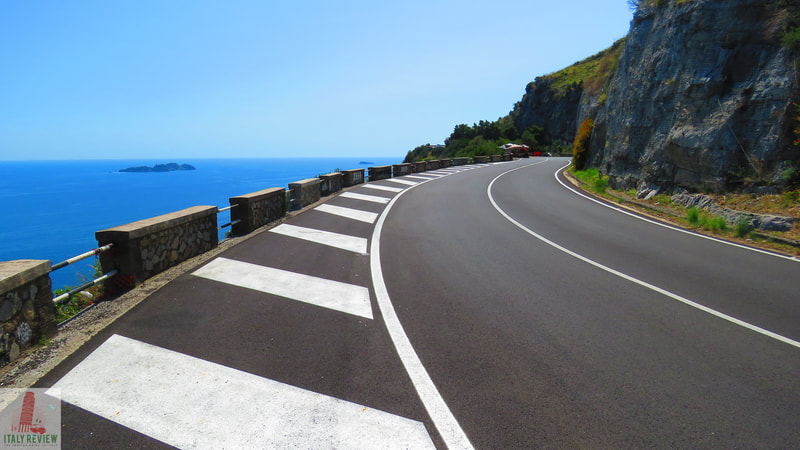 The start of the Amalfi Coast Road
Step Two: Positano to Amalfi - 45 minutes - 19 kilometres
Passes through Praiano, Furore and Conca dei Marini.
At the bottom of the town there are two beaches, one of which you need to walk around the headland to see properly. Back towards the main town you'll find dozens of restaurants, shops and a beautiful church (Chiesa di Santa Maria Assunta) whose colourful dome sparkles in the summer sunshine. Once you've finished exploring Positano on foot, you can make your way back up the hill to collect your car.

The 45 minute drive between Positano and Amalfi is arguably the prettiest part of the whole itinerary: along the way you'll pass villages such as Praiano and Conca dei Marini, with the beguiling Fjord of Furore lying between them and visible as you cross a high bridge. All along this section you'll be treated to stunning sea views to your right and dramatic cliffs to your left before eventually reaching Amalfi. 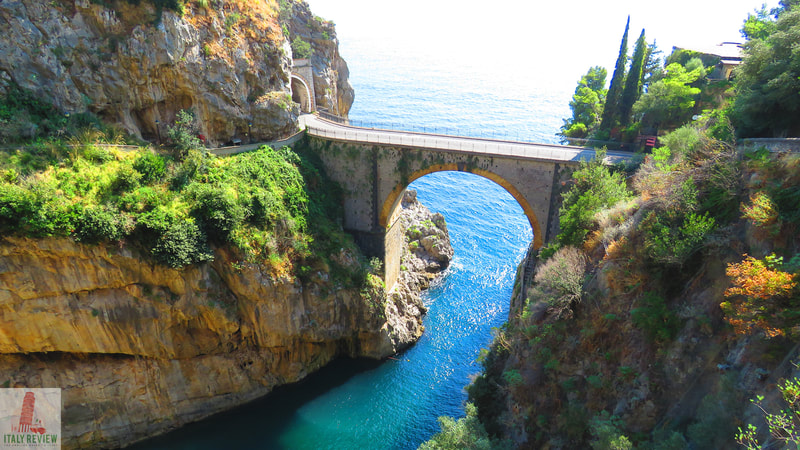 Bridge across the Fjord of Furore, Amalfi Coast 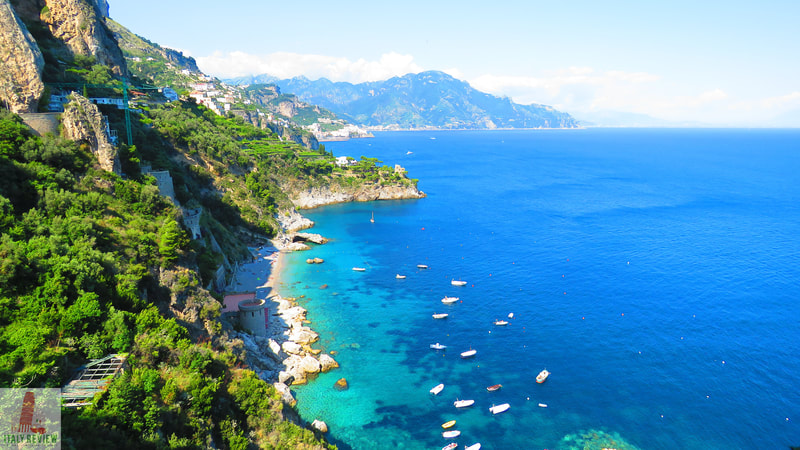 Conca dei Marini, Amalfi Coast
Step Three: Amalfi to Ravello - 17 minutes - 6 kilometres
Passes through Atrani, stops at Villa Rufolo and Villa Cimbrone in Ravello.
​If Positano and Amalfi are two of the most important towns on the Amalfi Coast, they have a third companion which belongs to the same "must-see" category. When you leave Amalfi, you head inland and uphill towards the beautiful town of Ravello.

Leaving Amalfi by road you head north-east around the headland where you find the pretty and quirky Atrani. Its prettiness needs no explanation but its special quirk is that it's officially the smallest municipality in Italy. It takes no more than a few minutes to drive all the way through it, but if you want to explore Atrani, it's best to do so when you're already in Amalfi with the two towns linked via a tunnel.

​From Atrani it's a 15 minute drive up the hill to Ravello; the road can be slow moving if you get stuck behind a lorry or bus, but it's just a case of being patient and not trying to rush it. There is a very good barrier parking lot at the edge of Ravello but it gets very busy during the height of summer and it's sometimes the case that you have to park a little further away than you'd like.

It takes some time to see the best of Ravello, arguably even more than Positano and Amalfi, because there are two famous gardens that are really unmissable. The centre of Ravello is dominated by the Cathedral on Piazza Duomo which is flanked by restaurants and gelaterias, while in one corner lies the entrance to Villa Rufolo, the first of those gardens.

Villa Rufolo is fairly small and doesn't require a long visit but it's home to one of the most iconic views of the Amalfi Coast, a beautiful pine tree lies in the foreground of two small church domes and the gorgeous backdrop of the sea completing the scene. The second garden: Villa Cimbrone has its own iconic Amalfi Coast view: the Infinity Terrace lined with busts and a vertigo-inducing drop below.

Depending on how much time you have available and where you've parked, it's worth making your way to the rear of Piazza Duomo where you can get some further sea views but also catch a glimpse of the beautiful Oscar Niemeyer Theatre, one of the most beautiful examples of modern architecture in Italy. ​ 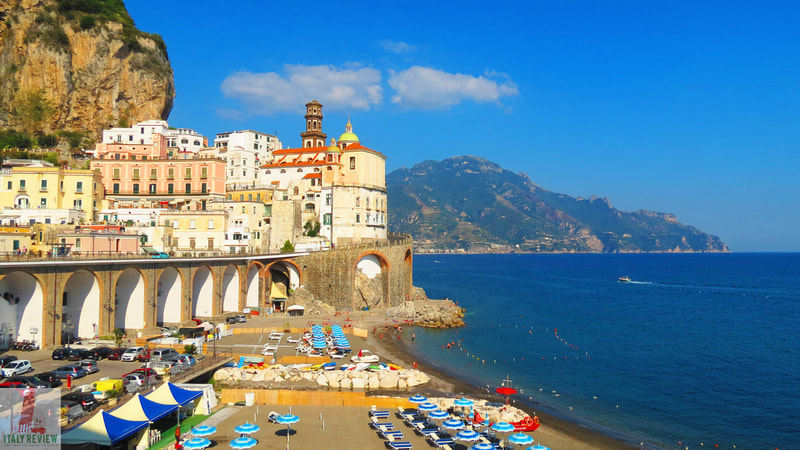 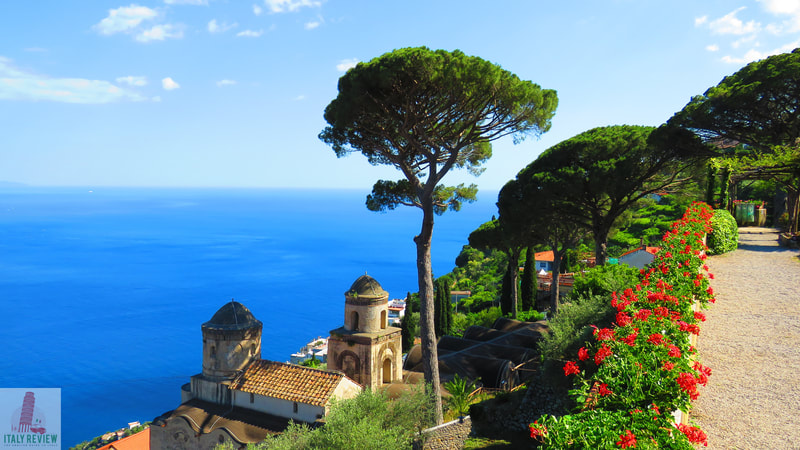 Villa Rufolo, Ravello
Step Four: Ravello to Vietri sul Mare - 55 minutes -  25 kilometres
Passes through Minori, Maiori, Erchie and Cetara.
The 25 kilometre section from Ravello to Vietri sul Mare takes around an hour; soon after returning to the main coast road after the descent from Ravello, you arrive at the charming little town of Minori, before continuing around the headland to its larger neighbour called Maiori. The two names indeed reflect the sizes with Minori being the smaller or "minor" of the two and Maiori being the larger or "major".

​Of those two, Minori offers a little more in the way of historic architecture while Maiori is more of a modern tourist resort and between the two of them you have the best of both worlds. Beyond Maiori the road continues to wind its way around the cliff edge with more of those stunning vistas down to the right. Eventually you reach the little beach resort of Erchie which is great for a few photo opportunities before arriving at the slightly larger Cetara.

As with many Italian towns, Cetara is synonymous with a type of food: anchovies in this case. There are lots of places within the town where you can purchase the local produce or just enjoy its considerable aesthetic appeal.

The final town on this little odyssey is Vietri sul Mare which marks the eastern extreme of the Amalfi Coast. A lively, popular town, Vietri is famous for its colourful ceramics, many of which decorate the buildings of the town centre. It's also a fully-fledged seaside resort with one of the largest sandy beaches on the Amalfi Coast. 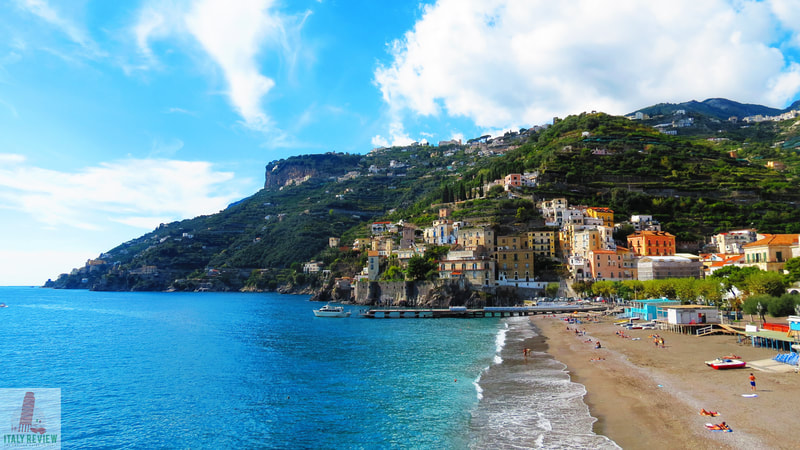 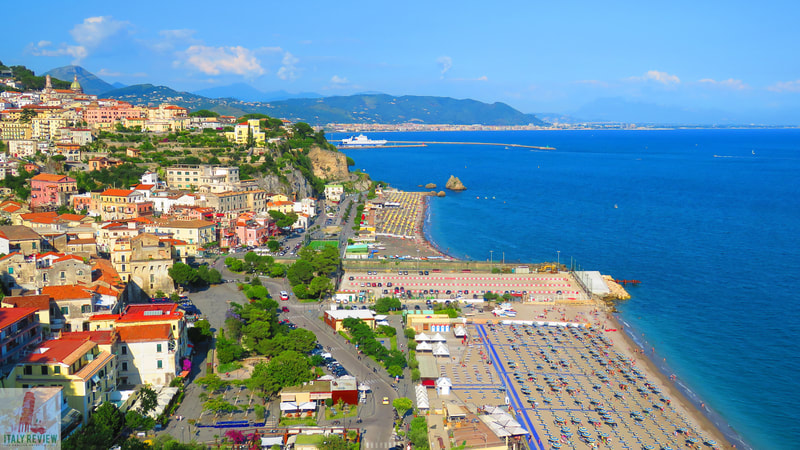