Glorenza is situated in the north-western corner of the Bolzano province in the wider, Trentino Alto Adige South Tyrol region. An important trading post in medieval times, it marks something of a crossroads between international and regional borders.

The area around Glorenza is known as the Upper Venosta Valley, (Vinschgau in German or Val Venosta in Italian) where the River Adige flows east to the town of Merano and beyond. The international border with Switzerland is just 12 kilometres west of Glorenza, while the Austrian border is only a little further directly to the north, around 20 kilometres away.

In an area dominated by Alpine scenery, the regional border with Lombardy, 20 kilometres directly south of Glorenza, is marked by the Stelvio Pass with its endless hairpin turns on one of the most famous roads in Italy.
Sightseeing

Main sights
​
​The beauty of Glorenza comes not with individual sights, museums or statues, but with the town itself. There are few towns in Italy that represent the medieval period better than this. As you enter Glorenza through one of the pointed arch city gates at either end, it's as if you've stepped back in time. The defensive wall surrounding the town is completely intact, punctuated by a number of guard towers. In fact it's possible to walk around certain sections of the city walls via a covered walkway and really get a feel for the town from a lofted position.

​Everything in Glorenza is delightfully pretty and the centrepiece of the town is its main square: Piazza della Città, (Stadtplatz). The main buildings around the square are topped with turrets or towers, and sometimes painted with frescoes. There seems to be a real desire to fill the town with colour and during the summer, the buildings display window boxes full of flowers or become naturally decorated with climbing grape vines. ​ 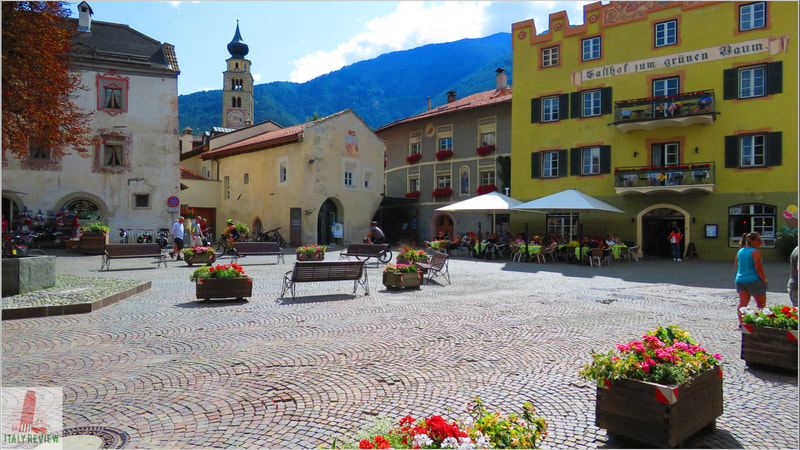 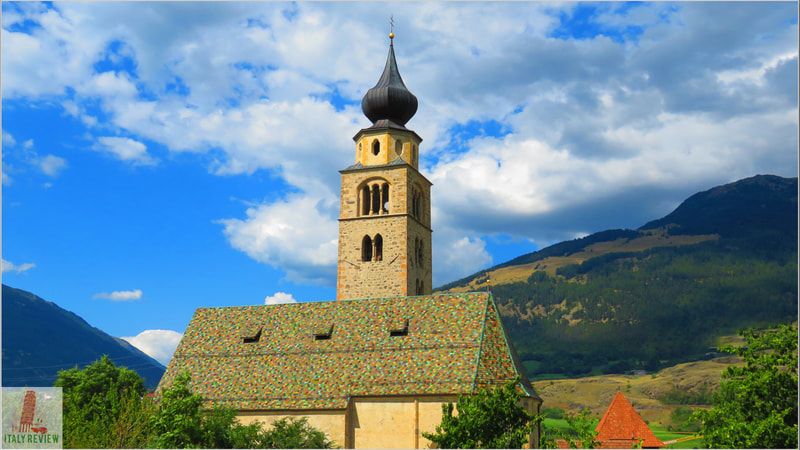 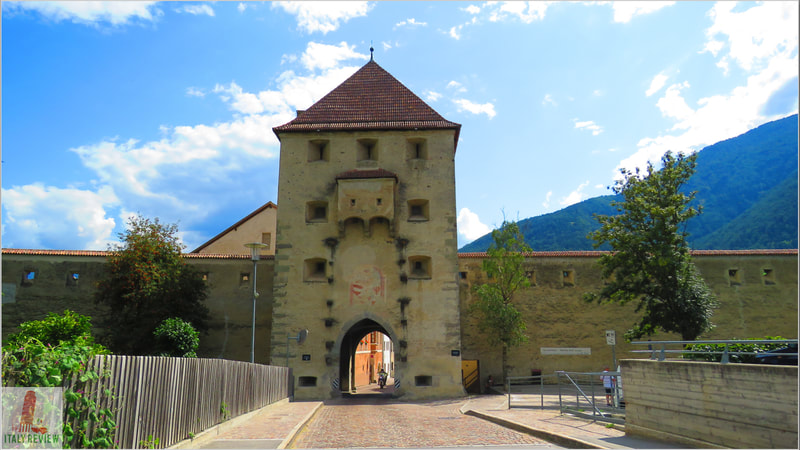 Glorenza City Gate
Glorenza is famous for its arcaded streets or porticoes, which have been hosting fairs since 1291 when the town was first granted market rights. The porticoes are a unique architectural feature in the local area and serve to create an extra layer of beauty along with the mix of architectural styles that span several hundred years and the later part of the medieval period.

A significant feature of that architecture is Glorenza's covered, boarded walkway around the city walls. At the southern section of the wall close to the main city gate is a small museum dedicated to the work of Paul Flora (1922 - 2009), one of the town's most famous sons, a caricaturist and graphic designer whose work has appeared in major international newspapers and other publications.

Curiously, the town's most famous church, the Chiesa di San Pancrazio which is named after Glorenza's patron saint, is situated just outside the city walls across the River Adige to the south. The church was originally built in the 13th century and had its distinctive onion-shaped dome added in the seventeenth century. One of the most striking features of the church's exterior is its multi-coloured tiled roof. ​ 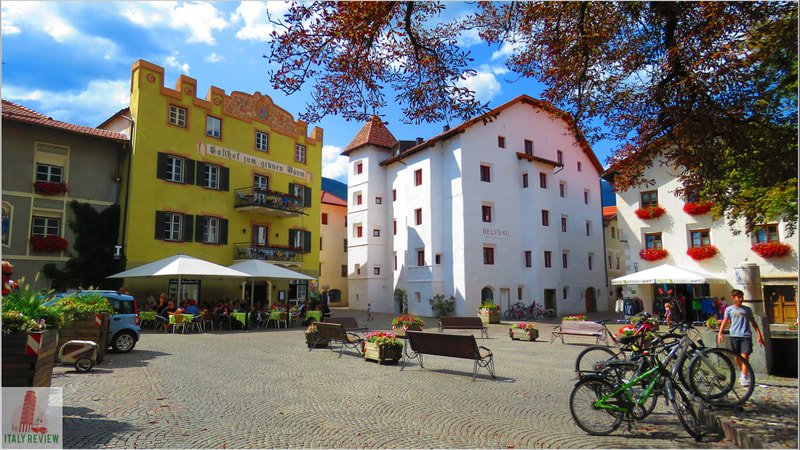 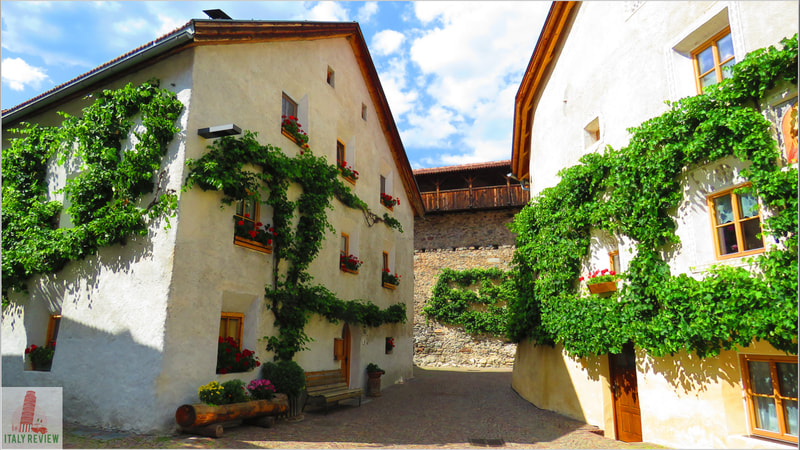 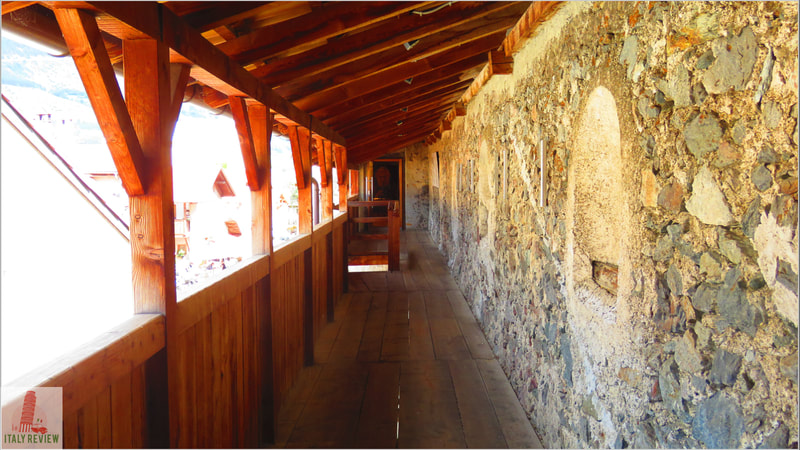 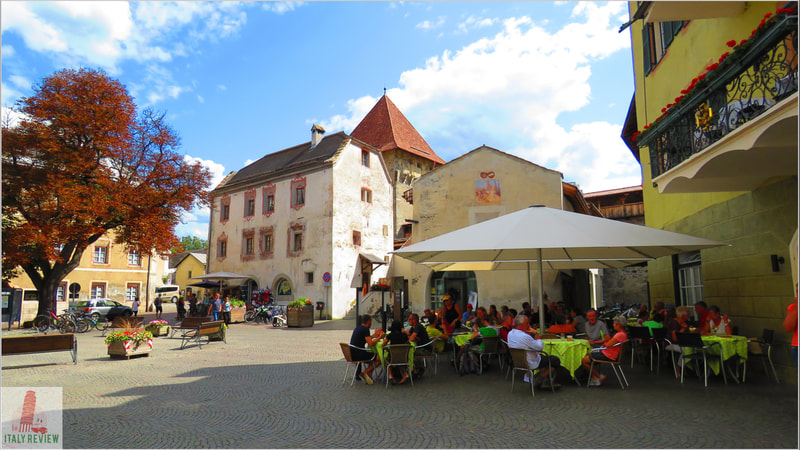 ​Glorenza is named among the Borghi Più Belli d'Italia with the tagline: settecento anni ben portati - seven hundred years carried well. This refers to the foundation of the city which can be traced back to the 13th century. In 1291 it was given market rights and duly flourished with the local trade dominated by salt in particular, as well as wine, livestock and metals.
Travel

Glorenza shares a train station with the nearby town of Sluderno which is situated a couple of kilometres to the south-east. Trains run between here and the town of Merano with a journey time of just over an hour. The sixty kilometre Val Venosta line that the train runs along was only opened in 2005, having been closed for around 15 years. Its eastern terminus is the small village of Malles Venosta, a few kilometres north of Glorenza. From Merano at the western extreme of the track, it's then possible to take trains greater distances to some of the region's major towns and cities such as Bolzano, Trento and Bressanone.

The most effective way to reach Glorenza and explore the local area is by car. It's served by a series of state roads: the SS241 which makes the short trip to the Swiss border, the SS40 up to Austria and the SS38 to Merano and beyond.
Comune di Glorenza
Although diminutive in dimension, Glorenza is officially classed as a city and indeed, the smallest city in Trentino Alto Adige South Tyrol. It's also an official municipality or Comune that had a population of just 898 in 2021. It stands at an elevation of 907 metres above sea level and covers an area of thirteen square kilometres. By far the most widely-spoken language in the town is German, with just 4% of the population using Italian as their native tongue.

The sightseeing highlights include the city's medieval wall, the Piazza della Città and the pretty Chiesa di San Pancrazio which lies just a short distance outside the southern wall. The top-rated eatery in Glorenza is Restaurant Steinbeck while the recommended accommodation is the Belvenu Boutique Hotel. The town celebrates its patron saint San Pancrazio every year on 12th May.
One of I Borghi più belli d'Italia (Italy's Most Beautiful Villages)

The area around Glorenza is characterised by small mountain villages, lakes and Alpine scenery. Immediately to the north of Glorenza os the little village of Malles Venosta, while further along the same road towards the Austrian border you reach San Valentino alla Muta which lies next to Lake Muta. One of the most extraordinary sights in the region and one of the quirkiest landmarks in Italy is the Curon Bell Tower which protrudes from the beautiful Lake Resia.

Driving south of Glorenza, you start to pick up signs for the Passo Stelvio, passing the tiny villages of Prato allo Stelvio and Trafoi along the way. From that point onwards, it's time to knuckle down and tackle one of the most notorious stretches of road in Europe. A seemingly endless number of hairpin turns reaches 48 by the time you reach the peak of the Stelvio Pass but every gear change and strain on your clutch is worth it when you get to the top and can enjoy the magnificent views of the Stelvio National Park. 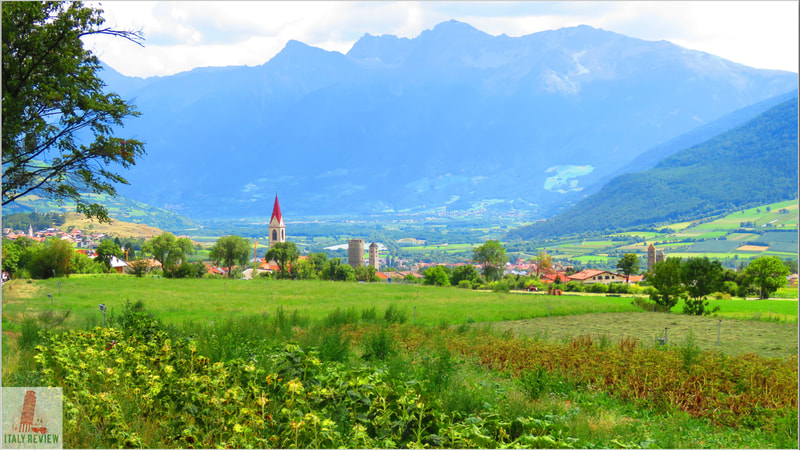 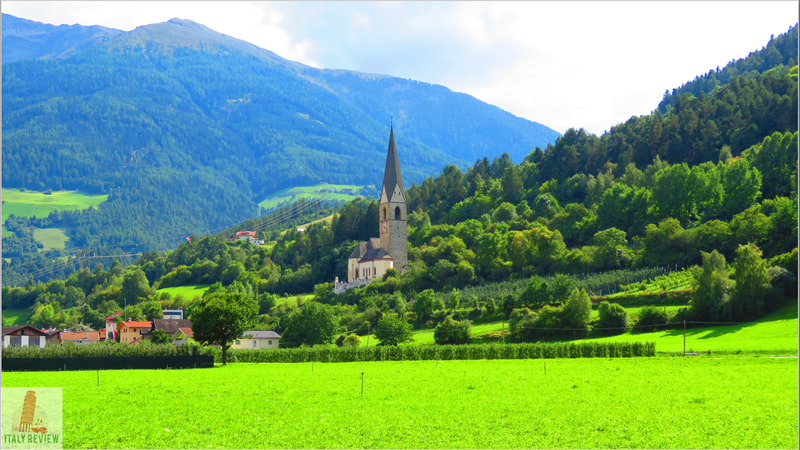 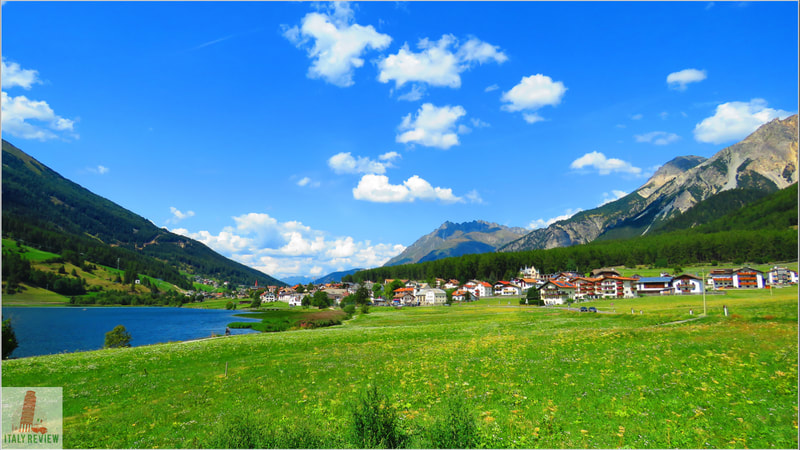 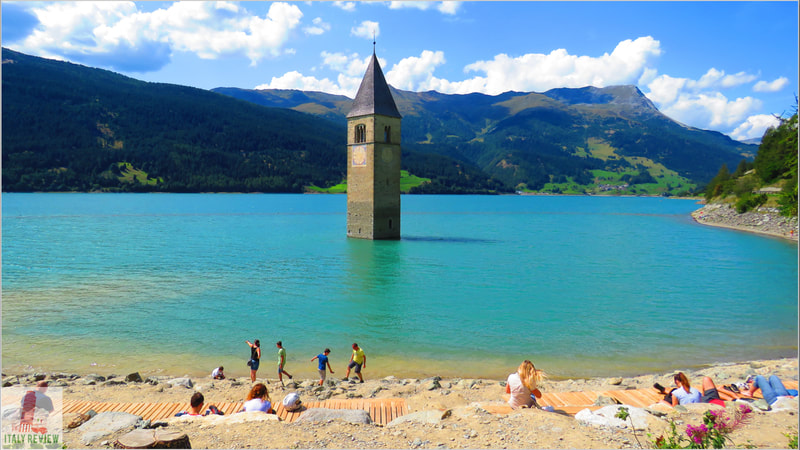 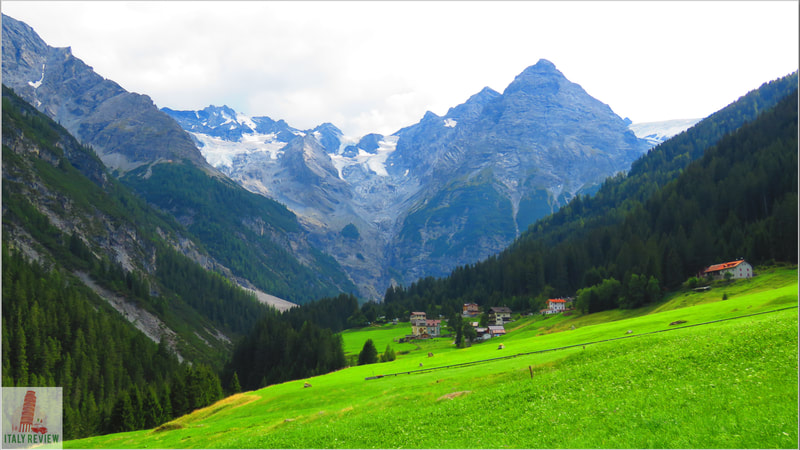 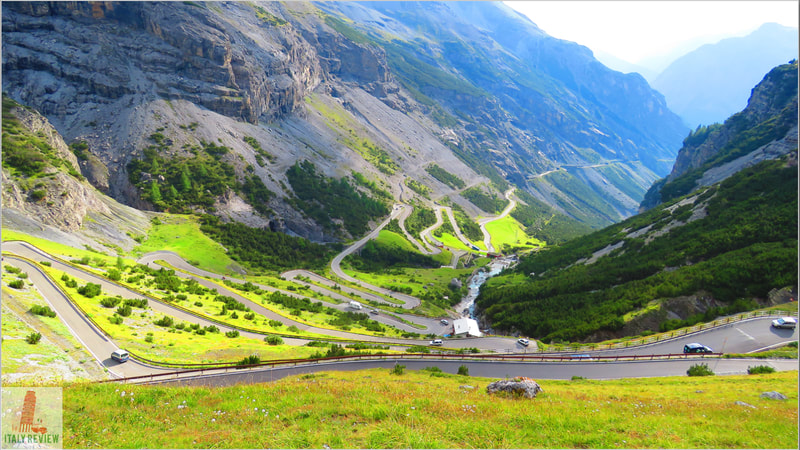