Related links
In theory, this route can be undertaken from any one of the dozens of resorts around the lake or indeed, in any direction. However, Como has been chosen as the starting point as it's the largest town around the lake and has some of the best accommodation options. Also, the great advantage of driving clockwise around the lake is that you're always on the side of the road that's closest to the water.

Whilst it is possible to do the whole route in one day, it's much better to split it over two. There are numerous places along the way where you'll likely want to stop either to visit one of the beautiful gardens, explore a pretty town or grab a bite to eat.
Step One, Day One: from Como to Lenno - 40 minutes - 26 kilometres
Passing through Cernobbio, Argegno and smaller villages. Also includes an optional stop at Villa del Balbianello of roughly two hours.
Between Cernobbio and Lenno you'll pass through a number of small towns and villages including Moltrasio, Carate Urio, Laglio, Brienno, Argegno, Colonno, Sala Comacina and Ossuccio. The drive from Como to Lenno should take around 40 minutes but it's almost certain that you'll want to stop along the way to take photos. 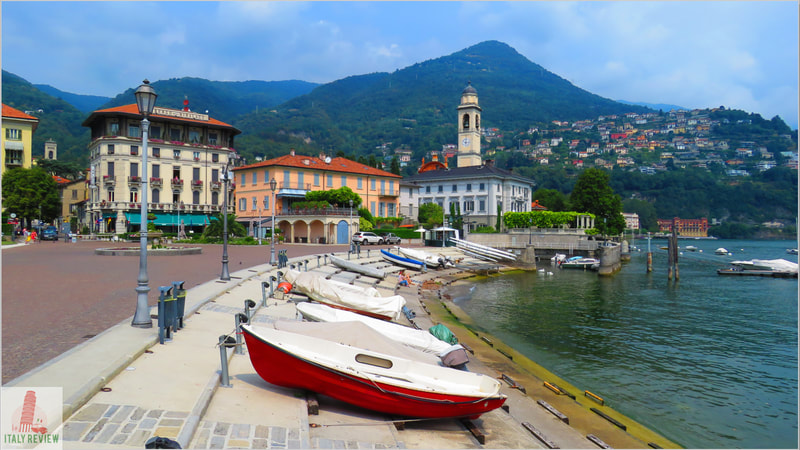 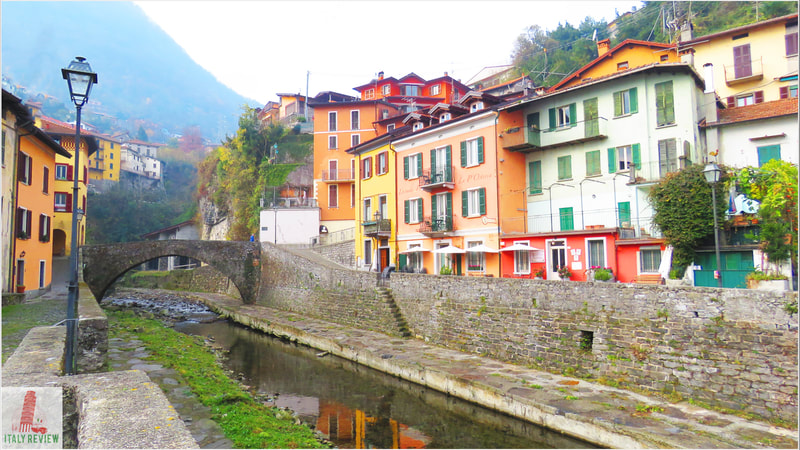 Argegno, Lake Como
During the summer, Villa del Balbianello gets very busy and parking can be difficult; it's also worth bearing in mind that it's a fairly substantial walk to reach the villa once you have parked. From the main car park just south of Lenno it's a one kilometre walk, steep in places, which takes around 20 minutes. Including the time spent looking around the villa itself, it comes to a stop of a few hours or so.

If you don't want to commit to the time it takes to visit Villa del Balbianello, then Lenno itself is a  more than adequate substitute; a typical town around Lake Como with an historic centre and a good amount of shops, bars and restaurants. It's also home to the Lenno Baptistery, one of relatively few in the country that are built separately from a church. 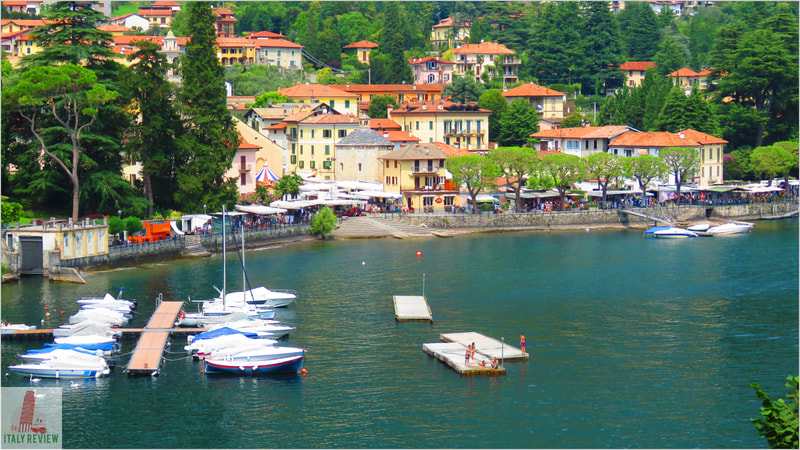 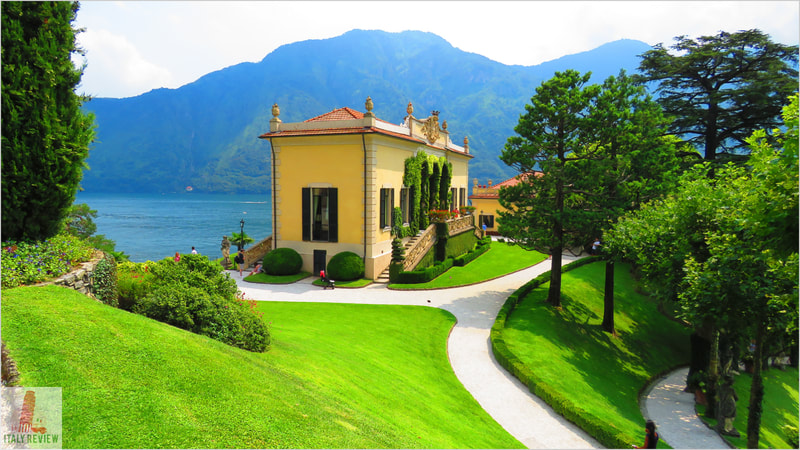 Villa del Balbianello, Lake Como
Step Two, Day One: from Lenno to Colico - 1 hour minutes - 42 kilometres
Passing through Tremezzo, Menaggio, Dongo, Gravedona ed Uniti and Domaso. Optional stop at Villa Carlotta.
As you head north from Lenno the first village you reach is Tremezzo which has an attractive waterfront lined with restaurants and lake view cafes. It's easy to drive through if you don't want to stop there and the main road just continues along without any deviation. This is a feature of this section of the lake and repeated when you reach the next village along, called Cadenabbia.

​Before you reach Cadenabbia however, you pass Villa Carlotta. Built in the 1930's, the Neoclassical villa has a botanical garden and is another of the main tourist attractions around Lake Como. Unlike Villa del Balbianello however, it doesn't require a long walk to reach once you've parked up. There are parking spaces on the main road close to the Villa and it's generally easier to park than at Villa del Balbianello.

​An hour or so is quite adequate for a visit to Villa Carlotta and then from there it's easy enough to be on your way again. As you continue north from Villa Carlotta you reach the town of Cadenabbia, almost without realising it as it seems very similar to Tremezzo in its layout. 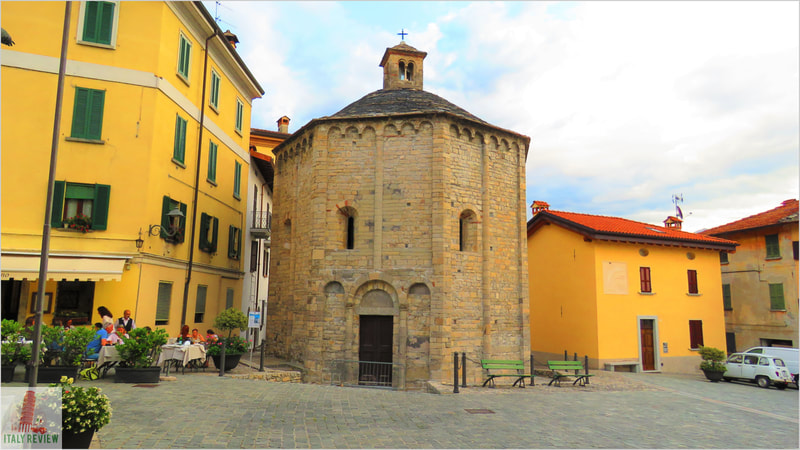 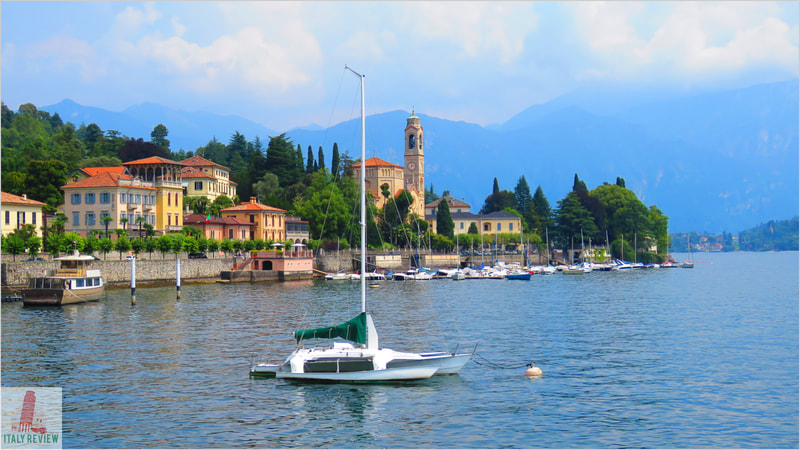 Tremezzo, Lake Como
Optional detour - from Cadenabbia to Bellagio or Varenna by car ferry
Most of the towns and villages around Lake Como have an embarcadero, a jetty from which you can pick up one of the lake ferries. The embarcadero of Cadenabbia is one of the most significant because from here you can put your car on the ferry and cross to Bellagio, one of the most famous resorts around the lake which sits at the top of a small peninsula. Another option from Cadenabbia is to continue across to the opposite side of the lake to another of its most famous towns: Varenna. ​ 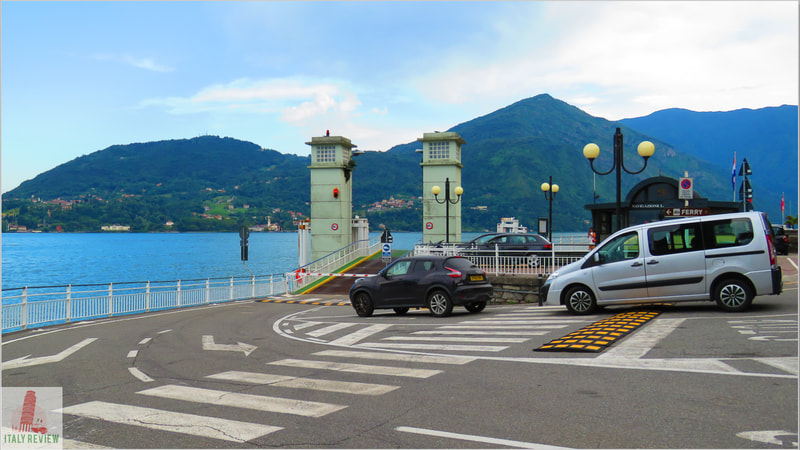 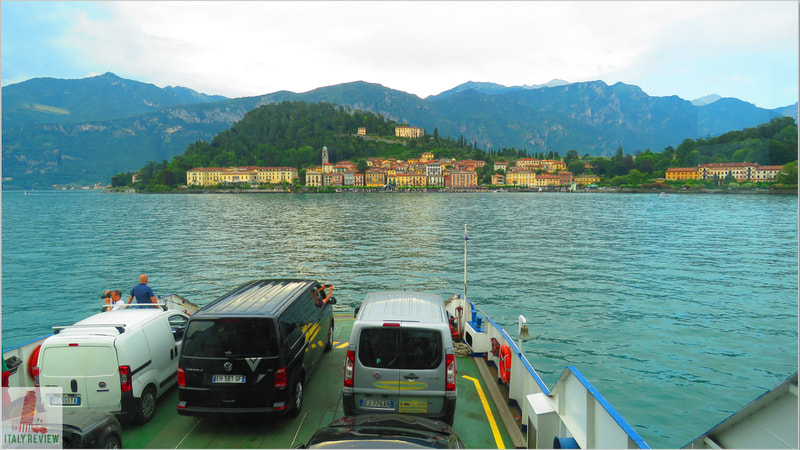 Cadenabbia to Bellagio Ferry, Lake Como
Continuing on to Colico without taking the ferry across to Bellagio or Varenna.
Assuming you haven't decided to take the ferry from Cadenabbia across to the other side of the lake, it's a case of continuing north around the main lake road. This will first bring you to Menaggio which is one of the signature resorts on the western side of the lake and another recommended stop.

This section of the route takes you through a number of smaller villages including Santa Maria Rezzonico, before you reach the pretty Dongo. This is a really laid-back little resort with waterside cafes and restaurants but if you want to pass through, it's another of those towns where you don't have to change direction to skirt around it.

Beyond Dongo is a town called Gravedona ed Uniti which is well worth a stop and slight detour from the main road. If you just want to get a really great photo however, drive past the exit to Gravedona and just as you're leaving the town, there's a small square with limited parking spaces at the side of the road called Piazza San Rocco. If you're able to find a space here, you can then make your way through a little mesh of buildings before reaching a church (Chiesa della Madonna della Soledad) which affords a wonderful view across the lake.

Once you've finished at Gravedona ed Uniti, you continue to make your way north around the lake road. The towns of Domaso and Gera Lario are both deserving of a visit or you can keep going to the little hamlet of Dascio. This brief detour at the top of Lake Como takes you into an area known as the Pian di Spagna Nature Reserve. It's a pretty little spot that marks the southern end of Lake Mezzola.

​If you don't want to stop at Dascio, it's just a case of making your way around the northern coast of Lake Como and crossing to the resort of Colico on the eastern shore. This is the suggested point for an overnight stop with the recommended accommodation being the Hotel ​Risi. 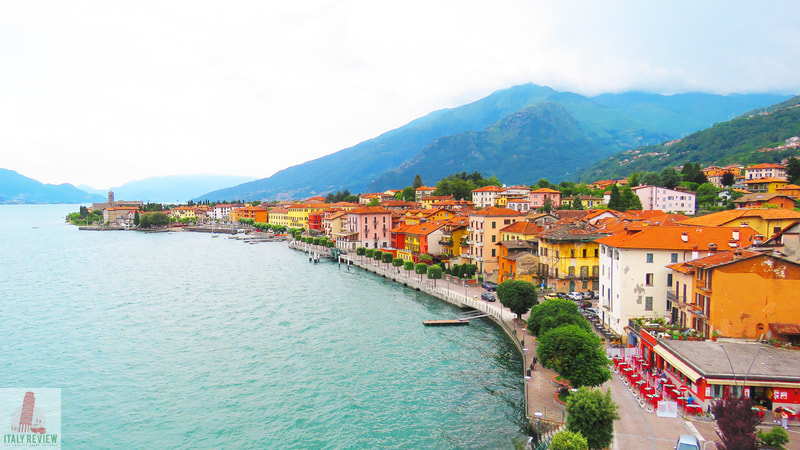 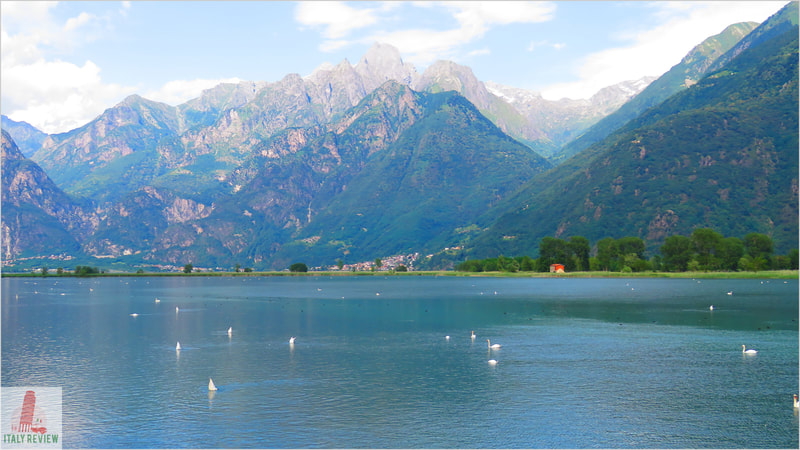 Pian di Spagna Nature Reserve, Lombardy
Step Three, Day Two: from Colico to Lecco - 50 minutes - 43 kilometres
Stopping at Varenna and Mandello del Lario.
Varenna is one of the most iconic stops around Lake Como and an absolute must-see. You'll want to spend at least an hour looking around here and quite possibly even longer. The picture-postcard setting draws a large number of visitors but the town is well-equipped with facilities, including a multi-storey car park with barrier parking; at the edge of town and not too much of an eyesore thankfully. Remember as well, that you could have skipped stage two from day one to reach Varenna by car ferry.

Whilst you're in Varenna you may wish to visit another of the Lake's landscaped gardens: this time called Villa Monastero which is located at the southern fringe of the town and simply oozing class.

From Varenna the southerly route continues to a couple of smaller towns, namely Fiumelatte and Lierna, before reaching another suggested stop. Whereas you may feel a little overwhelmed by the numbers of tourists in Varenna, the level of attention given to Mandello del Lario is significantly less. That makes it a good place to stop for lunch and to explore its colourful streets.

The suffix Lario appears in numerous town names around the lake and this refers to the ancient name of Lake Como. The Romans called it Larius but it's still known by some locals as Lario to this day. Mandello might not get the large tourist numbers but it does have one of the prettiest sights in the whole lake area: a row of multi-coloured buildings facing out on to the lake.

South of Mandello is another town that recalls the local name of the lake: Abbadia Lariana. If you're driving the route in the warmer summer months, you'll find this a popular spot for a picnic and perhaps a dip in the lake. You may choose to skip Abbadia Lariana as there's still a good deal to see at this point and some distance to travel.

At the south-eastern spur of Lake Como lies the town of Lecco. This is one of the largest towns around the lake and indeed a provincial capital, just as Como is. Lecco doesn't quite match Como in its overall appeal but it is notable as the home of one of Italy's most important authors: Alessandro Manzoni (1785 - 1873). Along with the likes of Garibaldi, Vittorio Emanuele and Cavour, Alessandro Manzoni's name is often used on streets, squares and other public places throughout Italy. Manzoni wrote I Promessi Sposi (The Betrothed) and is just about Lecco's favourite son with a statue close to the lake and even a hospital named after him. 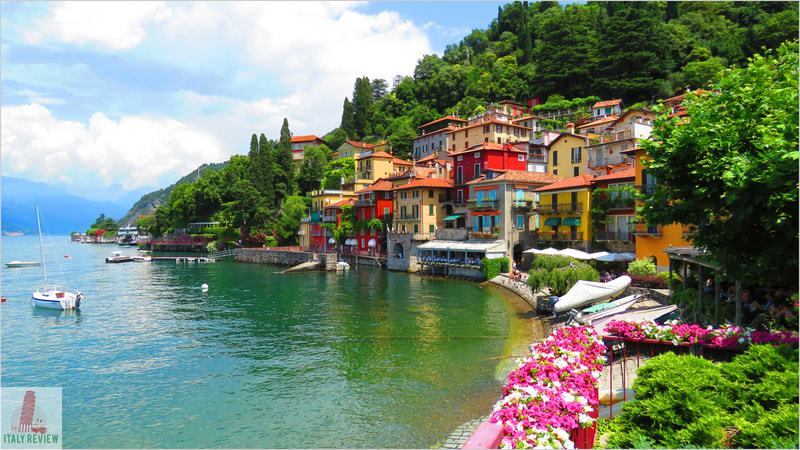 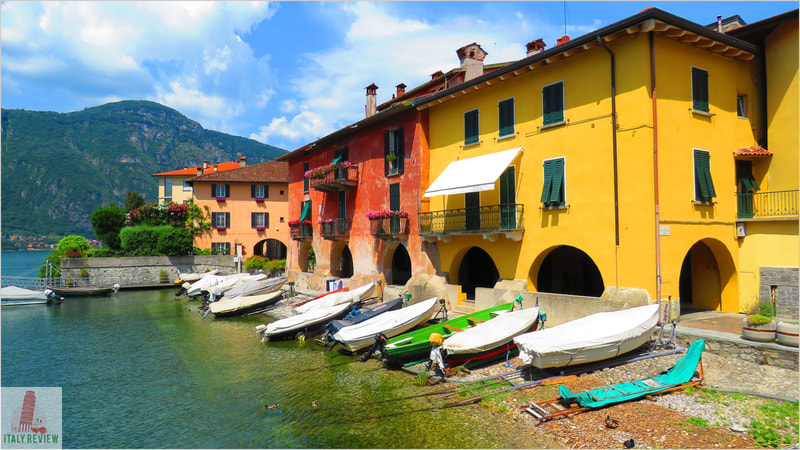 Mandello del Lario, Lake Como
Step Four, Day Two: from Lecco to Como - 1 hour 30 minutes - 52 kilometres
Major stop along the way at Bellagio.
You'll require at least an hour in Bellagio to get the best out of it while the visit to the garden is an optional extra. If you have 45 minutes to an hour to spare then it's definitely worth the investment of time.

From Bellagio at the northern tip of the little peninsula in the middle of the lake, it's just under an hour's drive south to complete the full circuit. This is a fairly twisting and turning section of the road but one of the most rewarding in terms of the views. As you're passing through the middle peninsula of the lake you feel a little bit closer to the opposite shore and there are endless photo opportunities.

Immediately to the south of Bellagio is the tiny village of San Giovanni while highlights as you drive further south include Lezzeno, Nesso and Careno. If you do have time, you can treat yourself to another of Lake Como's relatively hidden gems, the little town of Torno. It's another of those that doesn't get the publicity of the major resorts but that just makes it even more appealing.

​If you're like me, you'll want to fully complete the circuit and that's done as soon as you reach Como, the place where the tour started. 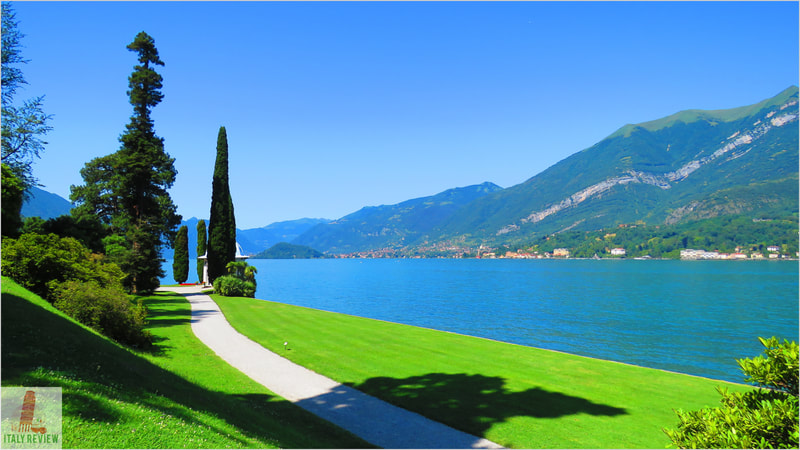 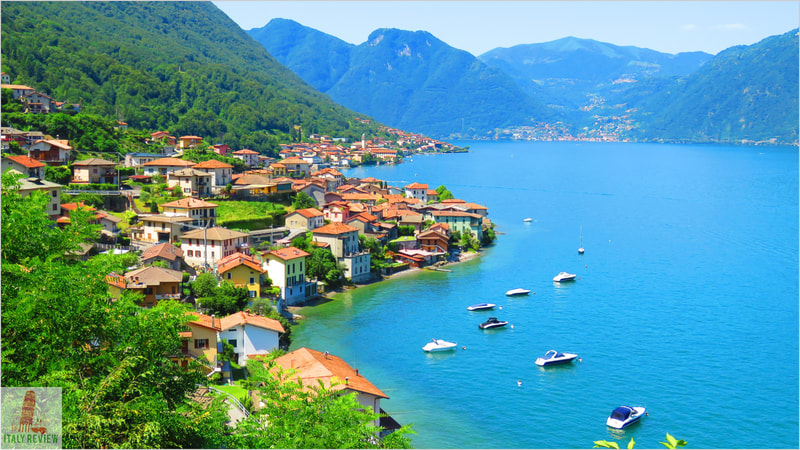