The Gothic style was first introduced into Italy by the Cistercian monks in the early 13th century. The Cistercians were considered a more strict order than the Benedictines and the story of Italian Gothic architecture can neatly be traced by what happened at Casamari Abbey in Lazio at the beginning of the 13th century. Throughout the preceding century, the Abbey had been in steady decline due to a number of economic factors. Since the ninth century it had been a Benedictine Abbey but it was rebuilt by the Cistercians between 1203 and 1217.

With the more rigid doctrine of the Cistercians came certain architectural characteristics with a much greater emphasis on functionality than aesthetics at the heart of their construction principles. Gone was the typical Romanesque bell tower while art, sculpture and other decorative elements such as stained glass windows were forbidden. ​The principles introduced by the Cistercians weren't the only basis for the style however: another monastic order, the Franciscans, were founded in 1208 and welcomed art in their churches. The first major Franciscan church was the Basilica of Saint Francis of Assisi whose fresco-adorned interior is the very antithesis of a Cistercian abbey.

Shortly after Casamari Abbey was built, construction started on another abbey further to the north, in Tuscany. The Abbey of San Galgano was built between 1218 and around 1280 and is one of the best remaining examples of early Italian Gothic architecture.  It took a while for the new architectural style to take hold across the whole country; construction of the first Gothic church in Rome, the Basilica di Santa Maria Sopra Minerva, didn't start until 1280. However, the earliest phase of Gothic architecture in Italy was gradually coming to a close to be replaced by the Mature or High Gothic era which lasted from around 1290 to 1385.
Characteristics of Italian Gothic architecture

Identifying the Italian Gothic style against Romanesque, Renaissance or Baroque

It's sometimes a bit of a challenge to correctly identify the architectural style of an Italian building although there are a number of tell-tale signs. Most of the Italian Gothic architecture still standing in the country was built between 500 and 800 years ago; the key to this is that what may be classed as a Gothic building could originally have been a Romanesque building with Gothic elements added later. Or, if it was originally built during the Gothic period upon Gothic principles, there's still a good chance that it suffered damage or was developed for aesthetic purposes later on in its life with Renaissance or Baroque elements. Essentially, there are relatively few buildings still standing that don't display features of different architectural styles and each of the "clues" if you like, need to be considered as a whole.

So perhaps when trying to determine if a building belongs to the Italian Gothic style, the first thing we should look at is the date when it was originally built. If it was built between the mid 13th century to the beginning of the 15th century, the chances are higher that it will be Gothic. Of course, sometimes you will want to know the style without knowing when it was built, and at this point we can start to explore some of the features on display.
Gothic Facades

In most cases, the first part of an Italian church you'll see is the facade and here we can gather a lot of information. The caveat to this being that an original say Romanesque church might have been rebuilt with a Gothic facade or that a Gothic church for example might later have had a Renaissance facade added. So whilst the facade does offer a lot of clues, it can't be taken in isolation as the determining factor.

Perhaps the biggest tell-tale sign of a Gothic church is the shape of the arches. Since the Romans introduced arches into their architecture thousands of years ago, they've been used ever since, either for structural or decorative purposes. The big difference between Romanesque and Gothic churches is the predominant shape of the arch. Romanesque architecture widely used semi-circular arches but the Gothic style introduced a central point into those arches and thus: the pointed arch. This can be seen in things like windows, arcades or entrances on a facade. If you see both the semi-circular and pointed arches on a facade, it's likely an originally Romanesque church that was later embellished with Gothic features or was perhaps built during the transitional period between the two styles. 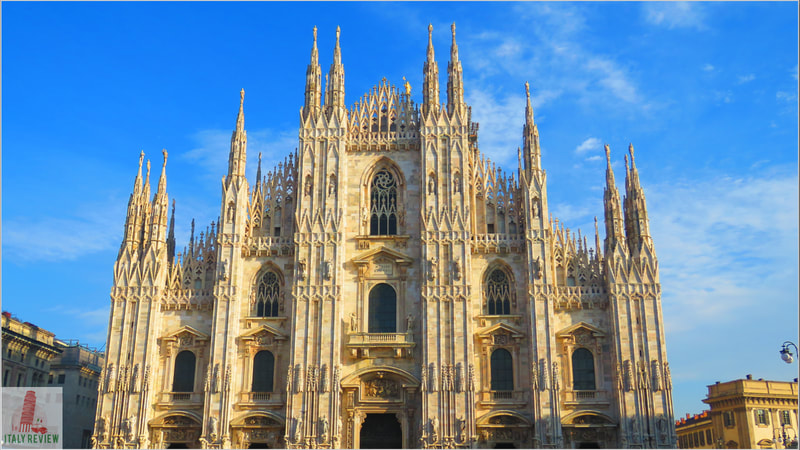 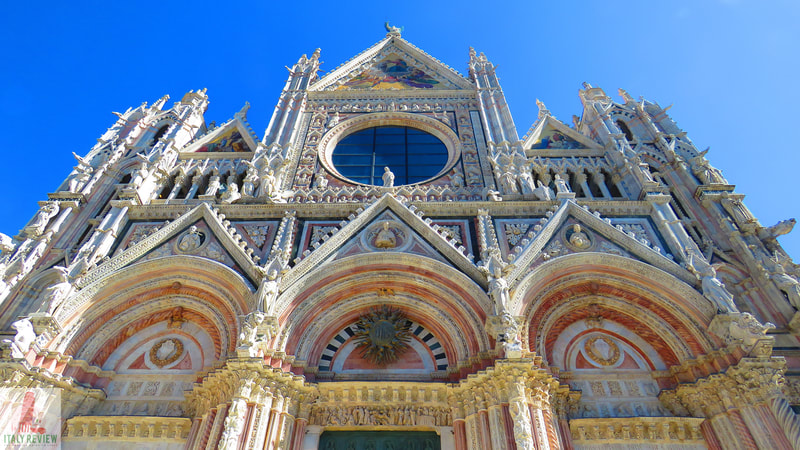 Siena Cathedral, Tuscany
​Other embellishments to a Gothic facade may include the use of gargoyles, or distinctively Gothic pinnacles (pointed spires at the tops of columns) of varying heights. Perhaps the most overtly Gothic building in Italy is Milan Cathedral, more typical of the northern European Gothic, whose facade is covered by a veritable festival of pinnacles. Milan Cathedral also provides a great example of another Gothic feature: the flying buttress.

Although the early, Cistercian Gothic buildings eschewed the use of decoration, the later examples of the style were able to introduce a much greater use of light into their churches because the flying buttresses provided much greater structural support and allowed for larger windows. This in turn saw a trend towards the use of beautiful stained glass windows. The flying buttresses weren't as widely used in Italian Gothic as they were in the northern churches; often considered ugly or at least lacking in sophistication. Arguments for both views can be strongly put forward with the use of the clunky flying buttresses offset against the much lighter church interiors.

Another feature that regularly appears in Italian Gothic architecture without being an essential part of it, is the use of polychromatic patterns on the facades. This is used to spectacular degree in the cathedrals of Orvieto and Siena with both their facades and internal spaces finished in alternating shades of marble creating a striped effect. ​
Gothic Interiors

When entering a beautiful Italian church one of the first things you're likely to do is look up to the ceiling. This is always a big pointer to the architectural style and in terms of Italian Gothic, we find a greater use of the ribbed vault here than we do with Romanesque churches for example. Another point of difference between Romanesque and Gothic is the appearance of the capitals which can be found at the top, bottom or even half way up a column. The lines between the two are slightly blurred here, but whereas a Romanesque church might be decorated with capitals displaying scenes of horror, scary monsters or moral lessons from the Bible, the Gothic capitals have a tendency to be a little softer with their messaging and are typically of flowers or foliage.

The use of marble decoration features heavily in Italian Gothic architecture, inside as well as out. Romanesque churches relied more on the use of stone than their Gothic counterparts which were usually constructed of brick and finished with either plaster or marble for decoration.

Another major sign of a Gothic church is the lack of a free-standing bell tower built next to it although it's often the case that smaller, more modest towers may be incorporated into the main building.

Finally, it's the very location of a church that may provide the biggest clue: Romanesque churches tended to be the centrepiece of a town or on its main piazza, whereas the Gothic style saw those churches given their own pride of place just outside the town or city centre. ​
Phases of Italian Gothic architecture with notable examples from each period